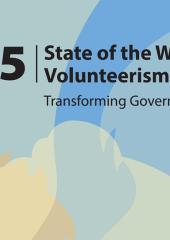 The State of the World’s Volunteerism Report 2015 is the first global review of the power of volunteer voices to help improve the way people are governed.

Drawing on evidence from countries as diverse as Brazil, Kenya, Lebanon and Bangladesh, the UN report shows how ordinary people are volunteering their time, energies and skills to improve the way they are governed and engaged at local, national and global levels.

Better governance at every level is a pre-requisite for the success of the new set of targets for future international development, the Sustainable Development Goals, which are due to be agreed at the United Nations in September 2015.

More than 1 billion people volunteer globally, the majority of them working in their own countries. Many are in the forefront of efforts to improve the way they and their fellow citizens are governed and engaged -volunteers are playing a vital role in making governments worldwide more accountable and responsive to their citizens.

They are working with governments and civil society to hold those in power to account, to represent the voices of those who are often left out of development decisions such as women, youth and marginalised groups. The end result is more inclusive -and ultimately more effective- development.