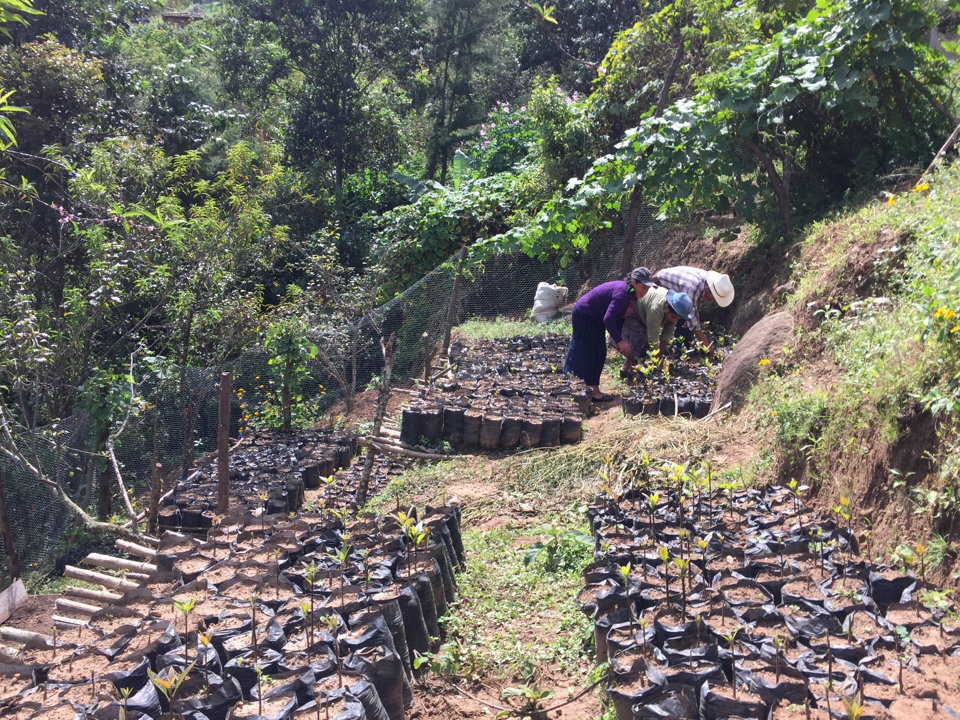 Consuelo Fernández works as researcher for the State of the World´s Volunteerism Report 2018 in Guatemala. During her fieldwork in the community El Edén in the Department of San Marcos she got to know the people who are promoting sustainable practices through community volunteerism.

In El Edén, a Mam indigenous community in the northeastern part of Guatemala, residents cut down hundreds of trees each year for their domestic energy needs. “We collect firewood in the dry season for the whole year. We look for wood which is completely dry, because it will burn for longer and we use less wood”, comments Celedonia Félix Matías, President of the organization Eucalyptus.

In many low-income communities around the country, as well as in Guatemala, it is common for people to use firewood as their main source of energy for cooking and heating. According to the most recent State of the World´s Forests Report, there has been a decrease of 129 million hectares (or 3.1%) – the size of Australia – in the world’s total forested area since 1990. In Guatemala alone, the Global Forest Watch estimates that at least 1.3 million hectares of tree cover have been lost since 2001.

Eucalyptus, a community-based organization composed of 28 women and two men between 20 and 70 years of age, came about through the recognition of the benefits of forests, the community members’ concern over deforestation, and volunteering as a platform for collective commitment to confront the problem.

“Our mission is to reforest our mountains, our forests,” explains Roselia Matías Pérez, treasurer of the organization.

The organization, which has been active for 10 years without any external support, has a nursery where they produce an average of 5,000 saplings a year to plant in the community’s forests. Its capacity for self-organization has been promoted, developed, and improved through volunteering; allowing its members to not only overcome life’s challenges but to advance in their self-sustainability and self-governance to reach their objectives.

In El Edén, traditionally the responsibility for housework falls to the women, which includes collecting firewood. Because they are directly involved in harvesting firewood, they see and experience the impact of deforestation. “Among the members of the group we wonder, what will happen if we only cut down trees without planting any?  Well, we’re going to lose out forests and we can’t allow that! So, we talked, we discussed it, and we decided to create a nursery,” Roselia relates.

Although the organization is spearheaded by women, participation in the group is often conditioned by the expectations of husbands or other male figures. The women must seek ways to exercise their right to participate without sacrificing their domestic work, even if that means increasing the burden of their responsibilities.

Throughout the years, the organization developed through inclusive learning both at the organizational level as much as in their horticulture practices to determine what works. This learning process allowed the group to strengthen the local knowledge of trees and to improve their methods of seed gathering, sowing, and planting. The group’s approach to diversifying their knowledge base and horticultural practices complemented their collective learning practices, ultimately contributing to biodiversity and adaptation to climate change. The group began to plant species such as: alder, cypress, cherry, and pine. They have since added vegetables such as chili, tomatillo, and celery.  They are currently experimenting with varieties of avocado and peach.

Commitment, equity, and the contribution of each member’s resources are distinctive characteristics of volunteerism which strengthen the sense of ownership, which is a driving force behind the group’s self-sustainability. The members meet in the nursery once a week. They organize into groups to collect dried leaves, carry water from the river, collect seeds, carry dirt, and to water the seedlings and saplings. In addition, each member contributes 5 quetzals ($0.60 USD) to buy bags and soil for planting.

The saplings which are ready for planting are shared out equally among the group to reforest the areas near the community. The organization only distributed trees among its members at first but then they decided to sell what they could not plant themselves. “We decided to sell what we had left over because people came and asked us to sell the trees to them. That’s why we decided to buy bags and soil”, relates Roselia. The saplings are sold for very little, 100 trees for 10 Quetzals ($7.20 USD).

Despite the organization’s accomplishments, one limiting factor to their growth and increasing their contribution to sustainability and resilience is the lack of water. “Last year [2016] we planted 6,000 saplings because there was water, but this year there is less water, so we have only been able to plant 5,000.  It was difficult, we had to carry four barrels of water every two days. Eleuterio [one of the members] helped us by letting us use [residual] water from his well”, comments Roselia.

The nursery, which has changed locations twice in the last decade, was moved once again last month due to the lack of water. At present, the organization is searching for external support to improve their access to water in the nursery.

Eucalyptus is an example of how volunteering, as a people-centred approach, contributes to the resilience of women, of the community, and of the natural environment. The principles of self-organization, inclusion, and learning led by volunteerism are factors which are key to the success of their work. While up until now the organization has been approaching the vital issue of sustainable resource management from a gendered perspective on its own, support and collaboration between the organization and the government is fundamental to be able to increase the impact of sustainable forest management and apply these practices at a greater scale.