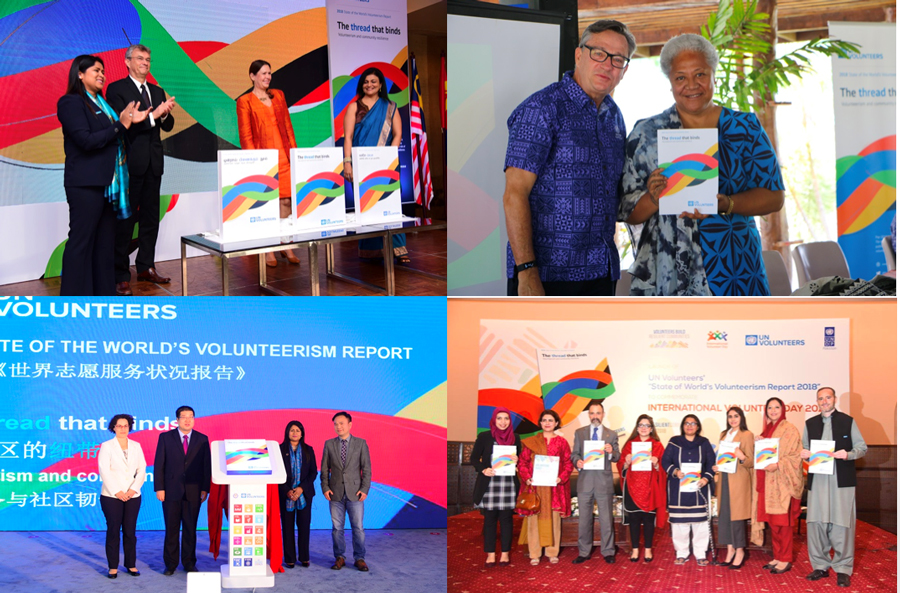 Launched in over 40 countries this year, the UNV flagship report, “2018 State of the World’s Volunteerism Report", finds that volunteerism is the thread that binds, enabling everyone to join together and come up with solutions to the problems their communities face. The worldwide launch events featuring esteemed representatives from the government, UN agencies, civil society, and volunteers sparked wider policy discussions and discourse on how to best strengthen the contribution of volunteers in creating communities that are resilient, inclusive and sustainable.&#13;&#13;

ASIA AND THE PACIFIC

In Asia and the Pacific region where there are nearly 29 million full-time equivalent volunteers, the regional launch held in Sri Lanka brought together young leaders and government representatives to discuss how volunteerism empowers youth and enables them to contribute to resilience-building efforts. Young volunteers, university students, and representatives from civil society also participated in the launch in China which released the Chinese version of the report. Meanwhile, the discussions at the launches in Fiji and Samoa addressed how volunteering can help vulnerable communities cope with rising sea levels and the effects of climate change. Presentations of the findings of the report also took place during the International Volunteer Day celebrations in Bangkok, Pakistan, India, Vietnam, India, Nepal, Cambodia, Lao PDR, Afghanistan, Bangladesh, Bhutan, Indonesia, Myanmar, and Iran. 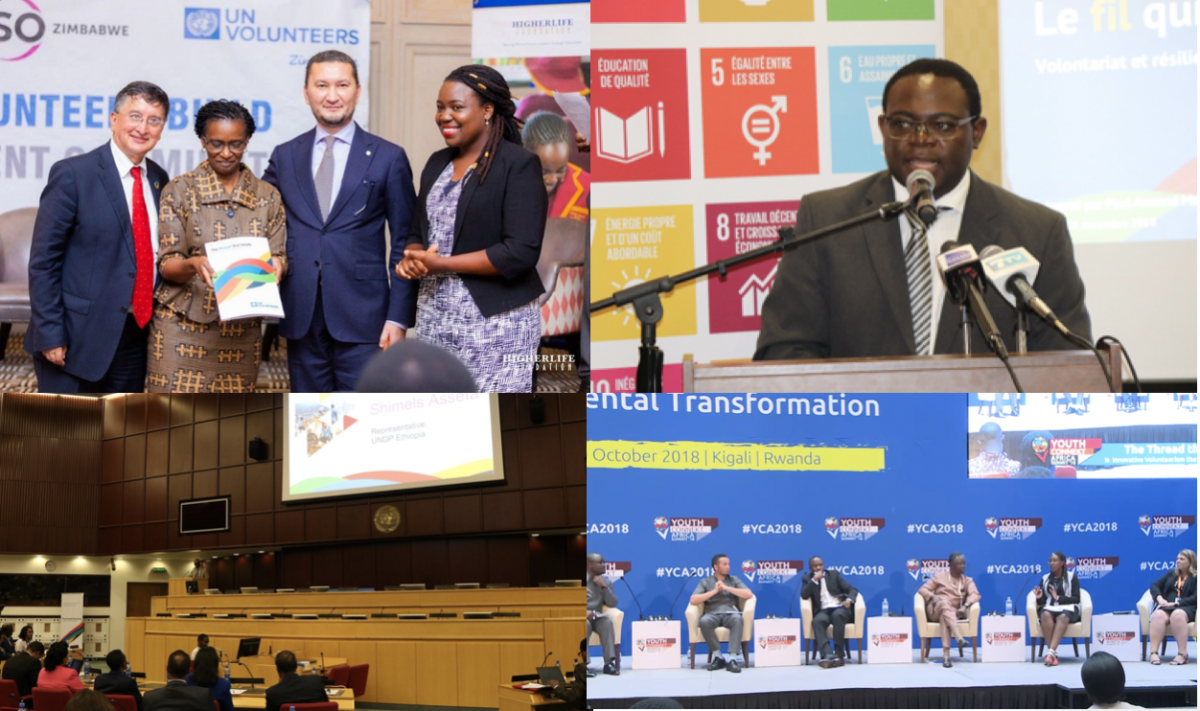 In Africa where there are over 12 million full-time equivalent volunteers, the regional launches took place at high-level events in Zimbabwe and in Senegal. The panel discussions in both launches highlighted the potential of volunteers - young, old, migrants, retirees - in solving the region’s most pressing development challenges and further made the case for integrating volunteerism into national efforts to achieve the Sustainable Development Goals. The contribution of youth volunteers to resilience was also emphasised during the launches at the Youthconnekt conference in Rwanda and IVD celebrations in Ethiopia, Zambia, Angola, Kenya, Congo, Cameroun, Zambia, Togo, Mali, Gabon, Guinea Bissau, Guinea, Nigeria, Liberia, Chad, Sierra Leone, Nigeria, Gambia, Cote d’ Ivoire, Burkina Faso, Central African Republic and Ghana.

In the Arab States where there are around 9 million full-time equivalent volunteers, the regional launch held in Egypt saw discussions with United Nations agency heads, government, and civil society representatives on specific ways in which volunteers are coming together to shape their futures and to build a resilient region. The Arabic version of the report, as well as a publication localizing the findings of the report, were also released. Additionally, UNV’s field units in Yemen, Lebanon, Iraq, Palestine, Somalia, Sudan, and Tunisia celebrated IVD, shining the light on the distinctive contributions of volunteers - enhancing human connections and fostering self-organization - especially in communities under strain.

In Europe where there are nearly million 30 full-time equivalent volunteers, the Russian version of the report was unveiled in Moscow, Russia. The launch event reinforced the potential of volunteering to strengthen community resilience and boost efforts towards the achievement of the Sustainable Development Goals.  The succeeding launches in the region further explored reinforced the ways volunteerism can be supported by various development actors in the region. These launches took place at a high-level event in Turkey, a policy discussion with academia and volunteer-involving organizations in the United Kingdom, a film festival in Switzerland, and as part of global conferences on volunteering in the Netherlands, Germany, and Ireland.  The key message focusing on the need to support volunteering to enhance its positive impacts also reverberated during the IVD activities in Kosovo, Azerbaijan, Bosnia, and Herzegovina, Serbia, Belgrade, Kazakstan, Kyrgyzstan, and Ukraine.

In the Americas where there are over 30 million full-time equivalent volunteers, the report launch in Ecuador brought together UN Agencies, academia, and civil society to discuss how volunteerism could be an effective tool for social integration especially in light of the increased migration in the region. The event also saw the release of the  Spanish version of the report.  Meanwhile, the launches in Mexico City, Bolivia, and Guatemala tackled how women volunteers which comprise the majority of the world’s volunteers, are at the forefront of community responses to local challenges such as natural disasters, violence, and rising inequality. During the IVD celebrations, presentations of the report findings were subsequently held in Brazil, Panama, Colombia, Haiti, Trinidad and Tobago, El Salvador and Venezuela. Meanwhile, in North America, the report was launched at major conferences in Canada, and in Washington and Texas in the United States.

Globally, the report was launched in July at the margins of High-Level Political Forum 2018 which saw Ministers from Ireland and Egypt and representatives from civil society highlight the scale, scope and critical role of volunteers worldwide and discuss how to best engage with volunteerism to help make communities more resilient to future shocks and challenges.