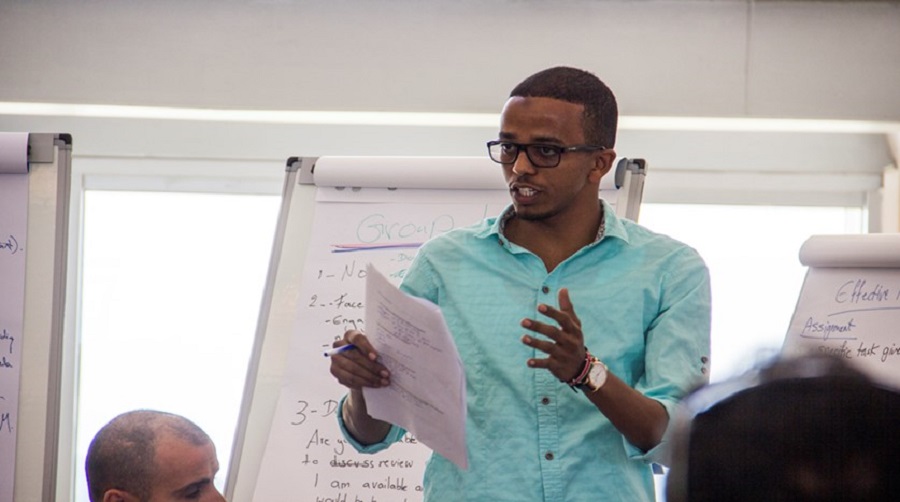 International UN Volunteer Abdifatah Farah Gure presenting during a Code of Conduct session in the Dohuk region in Irak (UNV, 2017).

Following the violent conflict in Iraq which has displaced over 3 million people internally since December 2013, UN Volunteers Endah Yuliarso and Abdifatah Farah Gure have been engaged in the emergency response units of the United Nations High Commissioner for Refugees (UNHCR). They are responsible for ensuring the protection and assistance of vulnerable groups or individuals in the Erbil and Duhok regions respectively.

From January 2014 to October 2017, over 230,000 Iraqi families have fled combat zones and armed groups, according to the International Organization for Migration (IOM). These families face unique protection risks due to fractured community structures, separation of families, insecure shelter arrangements, and loss of income. Over 75 percent of the families live outside camps, in informal accommodation and settlements, where children and women are particularly vulnerable, with an increased risk of suffering from sexual and gender-based violence and child labour, among others.

Abdifatah Farah Gure, an international UN Volunteer based in the Dohuk Governorate in Iraq, is working as an Associate Field Officer with UNHCR. He is engaged directly in the emergency response to the needs of the estimated 500,000 Iraqi and 94,000 Syrian refugees displaced in the Duhok region.

Identifying the vulnerable groups or individuals who may need special attention or arrangements, and making recommendations, as well as monitoring implementation of UNHCR assistance programmes are my main responsibilities" , explains Abdifatah.

Abdifatah also conducts regular field missions to ensure an improved protection environment for the displaced. The main problems he encounters on the ground are security challenges in accessing remote places, and the limited resources available to address the many needs of the displaced and hosting communities.

Endah Yuliarso, on the other hand, is a UN Volunteer Associate Protection Officer with UNHCR working for the Erbil Field Response Unit. In her daily work, she assists UNCHR with protection tasks for refugees and asylum seekers living in the camps, with a focus on Child Protection. Her tasks allow her to collaborate daily with other UN Agencies, NGO partners and government authorities.

As the UNHCR Erbil Field Response Unit is delivering protection for nearly half the refugees and asylum seekers in the whole of Iraq, we face significant challenges in providing high-quality assistance to people in the camps," says Endah.

Abdifatah’s work in the Dohuk region has contributed to a more secure environment and better living conditions for the displaced. He is happy about the cultural and language skills he has acquired during his assignment, as well as the resilience he has developed in such a challenging context .

Similarly for Endah, working as a UN Volunteer has been extremely rewarding, allowing her not only to pursue his passion in the humanitarian field, but also to learn about various protection mechanisms and about the coordination between different humanitarian actors.

I hope that I can continue to serve as a UN Volunteer, and I am proud to be part of a community that believes in helping humanity," she concludes.