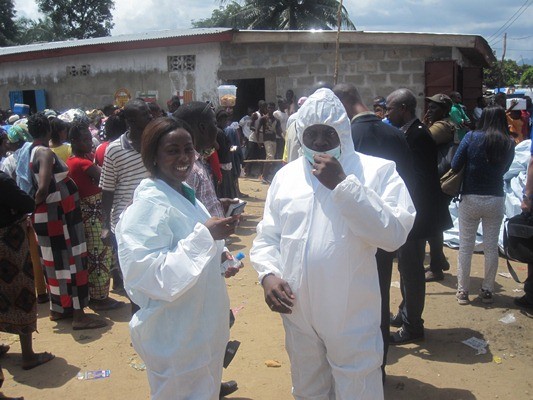 UNV, as part of UNDP, is supporting the UN systems response to the Ebola virus outbreak by providing volunteers to serve with the United Nations Mission for Ebola Emergency Response (UNMEER), which is coordinating the UN response, by providing volunteers to support UN partners in implementing programmes in response to Ebola, and by mobilizing community volunteers in support of local initiatives.

“The Ebola outbreak in West Africa has so far claimed over 5,000 lives in the three most affected countries of Guinea, Liberia and Sierra Leone. While the death and suffering caused by Ebola is immediate and must be stopped, the socio-economic impact of the disease will last long after Ebola has been brought under control,” says Gina Casar, UNDP Associate Administrator.  “UNDP is leading on early recovery efforts, and supporting nationally-led efforts to address the crisis.”

Currently, UNV has 19 UN Volunteers in Sierra Leone, 218 in Liberia and 18 in Guinea. This diverse pool of specialists serve as UN Volunteers with UNICEF, WFP, UNDP, FAO, UN WOMEN, UNMIL, UNHCR, OHCHR and UNOPS.
Additionally, UNV is in the process of deploying around 130 international UN Volunteers to support UNMEER operations in the three affected countries, with a few also supporting the UNMEER headquarters in Ghana. Profiles requested range from UN Volunteer Field Crisis Management Officers and GIS Data Collection Specialists to Air Operations Assistants and Logistics Officers. UNV has established a field unit in Accra to support the recruitment, briefing, training and management of these volunteers. All UNMEER volunteers, regardless of where they are based, will receive proper training and briefing on Ebola and ways of prevention.

UNV is also supporting UN entities in their response to Ebola in the three most-affected countries.  The World Food Programme (WFP) in Sierra Leone is scaling up its operation to reach more than 600,000 Ebola-affected people throughout the country to support the medical response and efforts to contain the transmission. The scaling up includes the enhanced field presence by strengthening the existing two Sub Offices in Kenema and Makeni and opening additional Sub Offices in Kailahun, Port Loko, Moyamba and Kissy as well as the enhancement of logistics hubs, the deployment of experienced WFP staff from other duty stations, the recruitment of field staff, and the increase in operational cooperating partnership with NGOs.

The rate of women dying in childbirth in West African countries hit by the Ebola epidemic is soaring, with as many as one in seven are at risk of death as fear of Ebola infection holds women back from seeking maternal health care in clinics and fear of contact with bodily fluids prevents people from helping them. This presents a severe challenge and setback to established development gains of the past decades, as the United Nations Population Fund (UNFPA) estimates that 800 000 women in Sierra Leone, Guinea and Liberia are due to give birth in the next 12 months.  To ensure quality maternity and neonatal care and prevent deaths due to labour complications, UNFPA is planning to open delivery centres in the three countries.  UNV is currently in discussion with UNFPA on the deployment of international UN Volunteers as midwives and in project management functions.

Additionally, the United Nations Development Programme (UNDP) is establishing a cash programme for Ebola-affected families and communities and is planning to recruit about ten UN Volunteers to support the programme in the three countries. In Guinea, UNV is working with UNDP to foster community efforts to stop the transmission of the disease by raising awareness among the populations most vulnerable on how to prevent its spread. These volunteer actions to raise awareness are essential to help prevent the rapid spread of the disease among families and communities.

UNV is supporting the mobilization of community volunteers in all three countries to support sensitization on Ebola and prevention measures, tracing the contacts of Ebola-infected patients, so that people at risk can be identified and followed-up and the distribution of food to Ebola affected families with the World Food Programme (WFP).

In September 2014, UNV initiated an Ebola UN Volunteer Special Recruitment Campaign, specifically for medical and logistical personnel willing to be deployed in the affected countries. This has enabled rapid mobilization and deployment of relevant personnel, in the UN Volunteer categories of medical doctors, public health specialists, lab technicians, midwives, nurses and medical logisticians, as well as field crisis management and data collection and coordination.

Hundreds of UN Online Volunteers have also supported the response to the Ebola outbreak in West Africa.  Online mapping for areas in developing countries suffering from various disasters – including disease - is an important tool in response.  In less than five days in August 2014, over 300 UN Online Volunteers were mobilized, who promptly produced or updated maps of relevant areas in Sierra Leone and Liberia to facilitate the work of humanitarian responders. UN Online Volunteers have also been involved in the development of infographics, poster, flyers and websites to raise awareness of Ebola.
Together with a consortium of Guinean youth organizations, UNV is carrying out sensitization campaigns about Ebola prevention measures in communities around the country.