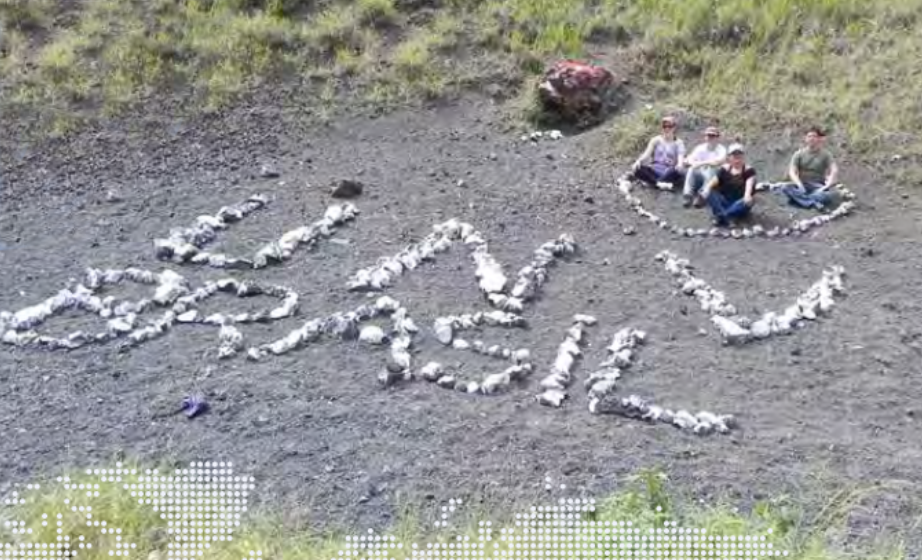 UN Volunteers climbed the San Salvador volcano to pay tribute to the 66th anniversary of the United Nations, to their country and to volunteerism. When they reached the top, they used stones to write ‘UNV Brazil’ on the ground. (UNV, 2011)

Following the devastation of tropical storm Ida in November 2009, a unique, triangular South-South partnership was initiated with the governments of Brazil and El Salvador and the United Nations Volunteers (UNV) programme.

The project, ‘Living Schools’, mobilized Brazilian volunteers to help thousands of El Salvadoran youth to deal with natural disasters, climate change adaptation and food security by teaching them about agronomy, health, nutrition, risk management, gender and education. During a subsequent tropical storm, many young people who were undertaking the training volunteered to construct temporary shelters for more than 500 people, carry out landslide risk assessments, and distribute food.

From 1980 to 2010 El Salvador was affected by 49 natural disasters, killing over 4,000 people. In the wake of tropical storm Ida in November 2009, which caused devastating floods and landslides in much of the country, the governments of Brazil and El Salvador agreed to cooperate to promote a culture of disaster prevention, adaptation to climate change and food and nutrition security in one of the regions most affected by this storm.

The project, called Living Schools, aimed to transfer skills, knowledge and best practices from Brazil (which at the time had been operating a similar school and community disaster prevention project for a number of years) to El Salvador and brought together the governments of the two countries, UNV, UNDP. UNV played a critical role in providing technical expertise and training, and mobilizing UN Volunteers.

UNV’s ability to provide technical advice stems in part from its long history of work in El Salvador. For many years, UN Volunteers have joined local and international efforts to make El Salvador more resilient, supporting first aid, undertaking reconstruction after natural disasters, and putting in place prevention strategies. UNV also played an important role in the adoption of a national law on volunteerism in 2011.

The Government of Brazil sponsored five Brazilian UN Volunteers (who had experience in the Brazilian disaster preparedness project) to join one national UN Volunteer from El Salvador to lead the project. Specialized in disaster risk reduction, nutrition, education and engineering, the six UN Volunteers trained 560 community youth volunteers in emergency response and worked closely with teachers, students and communities in the Department of San Vicente to increase their knowledge of nutrition, food security and preventive disaster activities. This makes this initiative a true South-South cooperation in action.

Our programme and everything else in the region was interrupted, but our volunteerism spirit was kept alive, and we joined efforts with the local civil protection committee to help families in need.

The project, which ran from 2011 to 2012, arrived almost at the same time as Tropical Depression Twelve-E, a tropical storm that lasted for more than nine days and caused great destruction across the country.

"Our programme and everything else in the region was interrupted," explains Flavio Lopes Ribeiro, a youth coordinator of the team of Brazilian UN Volunteers in El Salvador, "but our volunteerism spirit was kept alive, and we joined efforts with the local civil protection committee to help families in need."

In response to the storm UN Volunteers in the Department of San Vicente helped with the construction of shelters for more than 500 people, putting together food baskets for affected families, evaluating landslide risks, and assessing post-disaster needs.

Overall, the project benefited three target communities of San Vicente: Guadalupe, Verapaz and Tepetitan. Some 311 volunteers, who had been trained by the UN Volunteers, in turn trained more than 1,700 students, with a further 1,000 families supported through volunteer actions. In addition, three school gardens were created and an additional four schools received technical support and materials to create their own. In order to ensure project sustainability, a “Living Schools Manual” and various toolkits were created to help other schools use youth volunteerism for disaster risk reduction and climate change adaptation.

UNV and the Government of Brazil are currently exploring the possibility of partnering on a second phase of the programme and possibly scaling it up to Central America.