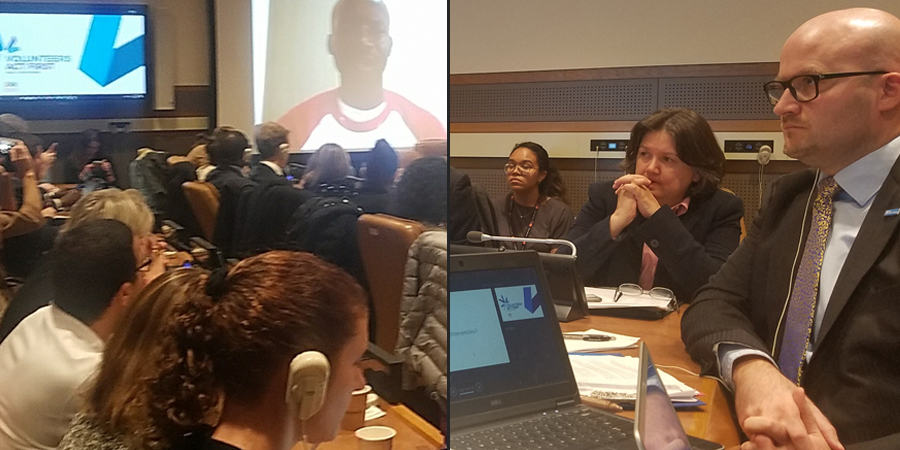 An interactive panel discussion took place at the UN headquarters in New York on occasion of International Volunteer Day on December 5. (UNV, 2017)

Towards an increased recognition of volunteers as first responders

Mr. Dominic Allen, Chief of the UNV Office in New York, opened the event welcoming the over 100 participants from Member States, UN entities and other interested partners, including serving and former volunteers.  Mr. Allen acknowledged the immense contribution of volunteers and the significant role that volunteers play as first responders in the aftermath of crisis and as mobilizers and campaigners in crisis prevention and preparedness.

With the agreement of the Member States on the panel (contrary to protocol, but in alignment with the theme of volunteers acting first,) two volunteers working in crisis settings took the floor first. Mr. Peter Cuffy, Director of the Antigua and Barbuda Red Cross branch on the island of Barbuda, was connected via videoconference. Mr. Cuffy shared his experience in view of the recent hurricanes that hit the Caribbean region causing widespread devastation. He expressed his gratitude “to all the volunteers from across the world” and thanked the international community for its support.

The second testimonial was from Ms. Rohini Swaminathan, UN Volunteer Geographic Information Systems (GIS) serving with the United Nations Development Programme (UNDP). From an early age Ms. Swaminathan has experienced multiple cyclones, including the deadly tsunami that hit India in 2004. Since then she has volunteered and started focusing her career on disaster risk reduction. She is convinced that you can do more as a volunteer because “it does not come with the same constraints of a regular job.”

His Excellency Mr. Chull-joo Park, Ambassador of the Republic of Korea to the UN, stressed Korea’s experience with volunteerism and with the deployment of volunteers as first responders in emergencies. After the Second World War and until the 1990s, Korea was a recipient of development assistance and the U.S. Peace Corps volunteers came to the country. However, nowadays Korea has become a volunteering partner that annually sends 4,500 volunteers to 50 different countries worldwide. After setting the stage, the Ambassador also shared his own experience as a volunteer, saying that “such experiences of solidarity and of helping others without any interest attached for the sake of humanity have remained one of the most valuable assets” for him. In addition, he highlighted the role of volunteers as first responders in Korea and of Korean volunteers as first responders abroad, fostering capacity-building, solidarity and social capital.

Mr. Nirmal Raj Kafle, Deputy Permanent Representative of Nepal to the UN, started his statement by noting that “for Nepal, volunteering is culture.” He also highlighted the role that both the Nepalese people and UN Volunteers played after the earthquake that hit Nepal in 2015.

Ms. Jessica Faieta, UN Assistant Secretary-General and UNDP Director for Latin America and the Caribbean, outlined the current situation in the Caribbean region with a special focus on the September hurricanes and the role of volunteers as first responders. As a former UN Volunteer, volunteerism has not only shaped her own personality but also her career path. and she pointed out that “volunteers not only bring energy but also expertise, capacity and knowledge.”

Finally, Mr. Alasan Senghore, the Permanent Observer of IFRC to the UN, shared his extensive experience as a Red Cross volunteer, emphasizing the strong and deeply rooted culture of volunteerism in societies worldwide. He also stated that International Volunteer Day is an occasion to commemorate those volunteers who have passed away in the line of duty, especially in Syria. By underlining the role of volunteers in delivering development results, Mr. Senghore stated that “we need to recognize the role of volunteers as key contributors.”