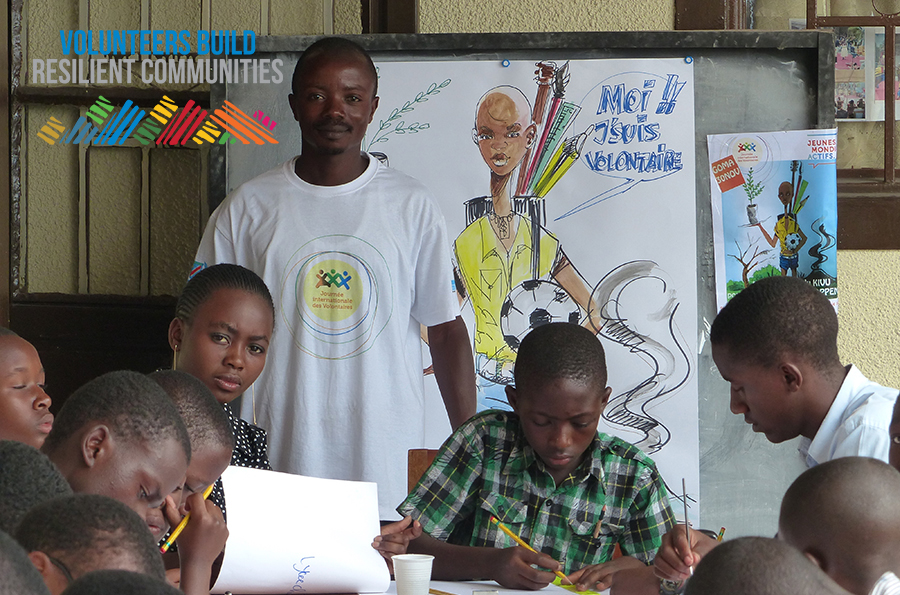 UN Volunteers in the Democratic Republic of Congo instill the values of volunteerism among youth.
(UNV, 2013)

International Volunteer Day (IVD), celebrated on 5 December, is the opportunity to recognize and appreciate all efforts invested by volunteers to advance on the Sustainable Development Goals (SDGs) across the world. The United Nations Volunteers (UNV) programme joins this celebration to honour, with other volunteering organizations, the thousands of women and men, young and old, who are giving their time and capacity to strengthen community resilience to climatic, social or political challenges.

In West and Central Africa, IVD is celebrated in all 24 countries by governments, civil society, non-governmental organizations and the UN system.

In Bamako (Mali), UNV commends the engagement of women in volunteerism, in a photo exhibition called "portraits of women volunteers in Mali". Through this activity, the role and outstanding achievements of women serving as UN Volunteers with the United Nations Multidimensional Integrated Stabilization Mission in Mali (MINUSMA) and other UN agencies, funds and programmes are highlighted and recognized. The exhibition will introduce to the public 15 to 20 portraits of UN Volunteers in action in their working environment in Mali. This activity also targets increasing the number of women signed up to the global UNV database as volunteer candidates.

In Gabon, young people are invited to participate in a slam competition, as a popular urban art for young people. The themes of the texts to be declaimed will have to take into account the promotion of volunteering and development and the fight against discrimination against women. The slam contest is organized at the French Institute of Libreville to award the prize for the best text in translating the theme chosen for the occasion: "Volunteers build resilient communities".

In Guinea Bissau, UN Volunteers are working with UN Habitat, the United Nations Development Programme (UNDP), the National Volunteer Committee, Civil Protection, the Red Cross and the Government to promote the resilience of urban communities in Gabusinho and Antula neighborhoods. A training of 50 volunteers and community members is organized over two days, on infrastructure resilience and good practices on house building as well as to establish a 'plant barrier' (sebes vivas) with enlarged canopy trees to reduce the impact of the heavy winds in Gabusinho.

Togo stands out strongly in the IVD celebrations. Volunteers from different organizations will share experiences between them through a television broadcast by local television channel TVT. UNV also participates in "Eco jogging", a public health and sports event that allows participants, while running to keep fit, to pick up plastic bags in the street. Other activities include the organization of a"Volunteer of the Year" contest, and the installation of the IVD Village, which is a fair where various volunteer structures will be displayed around their exhibition booth.

In Guinea, UNV will facilitates the training of 200 young people on the concept of volunteering at the University of Kindia on 5 December. IN the lead up to that, a fundraising campaign in solidarity with people with disabilities was initiated from 25 November to 4 December by international and national institutions, companies and non-governmental organizations in Conakry and Kindia.

In Niger, the production and broadcasting of a documentary film on the work of volunteers in agriculture, gender equality, community resilience and more is planned for the IVD launch in NIamey and Maradi.  Additionally, UNV is convening a volunteer forum on the theme of community resilience, gender and development, prevention and peaceful crisis management. Another important activity targets the collection of food products, pharmaceuticals, clothes and toys for distribution to minors in detention in the prison of Kollo in Niamey.

In Liberia, eight high schools were chosen and prepared to discuss the values ​​of volunteerism under the theme "Does Volunteerism Contribute to Resilient Communities?" On this occasion, UNV is working with partners to provide awards (UNV t-shirts, caps and certificates) to the top three schools.

In Chad, UNV and partners are launching awareness-raising activities on volunteerism for women and youth. In solidarity with people affected with leprosy, volunteers will clean a clinic and school for their children and then donate school supplies to students, mainly girls, to encourage them to have quality education.

With UNV, volunteers in Cameroon launched the rehabilitation of two boreholes in the Bogo community in the far North of the country and participated in a fair to present to the public the achievements made by volunteers for their communities. The activity took place at the Reunification Monument in Yaoundé.

In Benin, volunteers organized a safety and hand-washing awareness-raising caravan followed by donations of waste bins and handwashing equipment in Cotonou on 3 December.

In Sierra Leone, IVD activities will take place over four days, including the cleaning-up and painting a hospital ward, the Princess Christian Maternity Teaching Hospital.

Other activities to celebrate the volunteers are underway, such as in Dakar, Senegal, where a high-level panel on community resilience through volunteering, an exhibition of volunteer organizations and a blood donation drive have been organized.

In Congo, the Volunteer Organizations Platform has put in place a joint plan for the commemoration of 5 December 2018. It aims at fostering community resilience to promote sustainable development. Among the planned activities, a conference-debate on "Resilience", a donation of books for local libraries, clean-up operations and sports activities between international and national volunteers will be held.

In Côte d'Ivoire, Burkina Faso, the Central African Republic and Ghana, etc., volunteers will also be fully commended for their various contributions to local communities, as part of the celebrations on IVD.

Currently, 109 million volunteers around the world, including 7.1 million in West and Central Africa, from diverse backgrounds and professions, support the development of vulnerable communities.

This day, 5 December, is dedicated to volunteers and recognizing their involvement and commitment to build sustainable and more resilient societies.