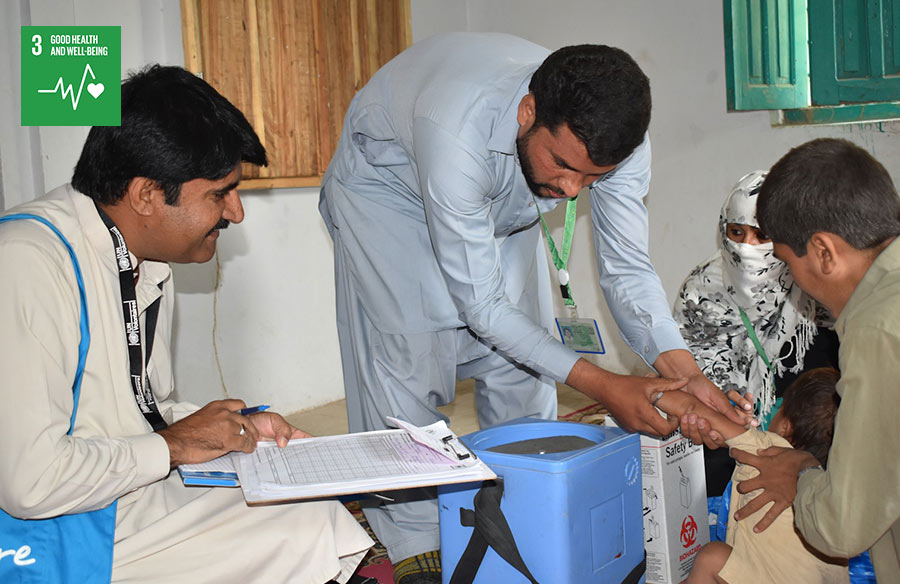 In Pakistan, 157 UN Volunteers with WHO conduct a large-scale measles vaccination campaign

In 2018, the United Nations Volunteers (UNV) programme partnered with World Health Organization (WHO) to support the Measles Supplementary Immunization Activities in Pakistan. Within two weeks, 157 national UN Volunteers were mobilized and deployed across the country to support WHO and the Government of Pakistan to conduct surveys for the monitoring of the measles campaign.

As part of the Expanded Programme on Immunization a nationwide measles follow-up vaccination campaign was conducted from 15-27 Oct 2018 by the Ministry of National Health Services, Regulations and Coordination (MoNHSRC) and the Government of Pakistan.

WHO provided the technical assistance to respective provincial health departments and district health management teams. The objective of the campaign was to vaccinate children from six-months to five years with one dose of measles vaccine, irrespective of their previous vaccination status and illness.

UN Volunteers contributed significantly to the success of measles campaign conducted in Pakistan for the period 15 to 27 October 2018, during which more than 37 million children aged 6-83 months were vaccinated against the deadly measles disease. The UN volunteers supported the monitoring of the campaign in 157 districts in all four provinces and federating areas provinces including Tribal Districts.  --Dr Ni’ma Saeed Abid, WHO Representative in Pakistan

During the initial phase of the campaign, the federal Expanded Programme on Immunization, in consultation with provincial managers, identified some high-risk districts which required closer monitoring for the preparation and implementation of the campaign.

The monitoring data was planned to be utilized by the provincial managers and technical partners to identify support needed for the districts to mitigate shortfalls.

WHO and UNV partnered to recruit and deploy national UN Volunteers to monitor the District Measles Supplementary Immunization Activities across the country. UNV’s swift recruitment and deployment of volunteers from and to all four provinces provided a great response to the Government of Pakistan and WHO’s 2018 vaccination campaign.

Within two short weeks, UNV had mobilized 157 national UN Volunteers, who worked closely with the WHO country office in Islamabad as well as its provincial teams in district provinces and administrative zones. Many of the volunteers were deployed as District Monitors for quality assurance and outreach activities.

My contribution to WHO has impacted on the local community. The remote monitoring tools helped all the stakeholders to bring accountability and accuracy in our services and it enabled getting timely feedback from communities on the gaps identified and providing a response to them. --Ali Sarwar, national UN Volunteer with WHO, Pakistan.

Due to their understanding of the language, community dynamics and cultural awareness, national UN Volunteers fostered participation even in the most marginalized communities.

By engaging national UN Volunteers in the vaccination campaign, WHO was enabled to have a deep reach in households across the country and vaccinated more than 37 million children - which translated into a success rate of 94 per cent.

The successful partnership between UNV and WHO in Pakistan is a testament to the commitment of the UN Volunteers to serve. The rapid deployment and technical competency of national volunteers provides an enabling environment for partner organizations to successfully attain their project’s objectives and contribute to their regional and global mandates.

Measles is a highly contagious disease which can be fatal in children, but is preventable with vaccination. In addition, 157 national volunteers were deployed with WHO last year District Monitors for the mass scale measles campaign who were instrumental in ensuring smooth implementation of measles campaign. I greatly appreciate role of the UN Volunteers and hope that we can benefit from their vital on-the-ground experience in challenging environment in future as well. --Dr Ni’ma Saeed Abid, WHO Representative in Pakistan