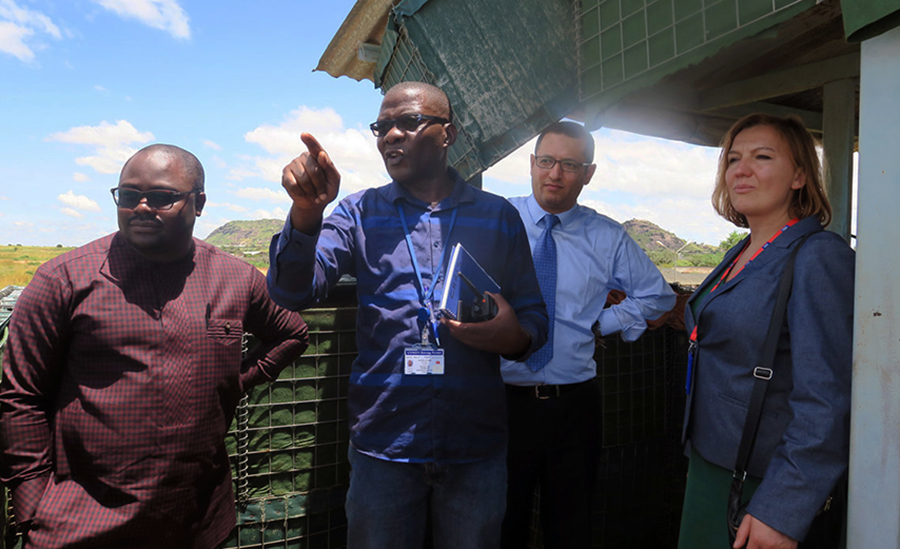 There are at least two things that make the United Nations Mission in South Sudan (UNMISS) unique: one is that its host country is the youngest in the world, having gained its independence in 2011, and another is that it employs more United Nations Volunteers than any mission worldwide.  I am one of them.

Earlier this week, representatives from the United Nations Volunteers central office in Bonn, Germany had a chance to briefly experience this singular environment during a two-day visit to UNMISS headquarters in Juba. Their objective? To get a better understanding of the challenges and rewards of working as a UN Volunteer in South Sudan.

"Volunteers are links between communities and peacebuilding stakeholders, so it’s important they continue coming because they bring a lot of motivation," said Olga Zubritskaya-Devyatkina, Chief of the Volunteer Solutions Section.

A heap of meetings in the capital city awaited Ms. Zubritskaya Devyatkina and her colleague Andrey Pogrebnyak, Director of Management Services, but no matter how many roundtables were on the agenda, their tour of headquarters could not be complete without a glimpse into the most distinct feature of the mission: its protection of civilian sites.


We have in total five protection sites across the country, and in each one, UN Volunteers play an important role, taking on tasks like coordinating humanitarian access to the sites. This dimension of the mission’s operations is quite particular because it is the only one that has them. --Numa Shams, a Recovery and Reintegration Officer who accompanied the delegation

Protection of civilian sites in South Sudan were first established by the UN in 2013 after inter-ethnic fighting forced over two million citizens to become internally displaced and close to two million more to flee the country altogether in search of refuge.

According to the latest UN numbers, the Central Equatoria site, adjacent to the main mission compound in Juba, hosts a total of just over 29,400 civilians. Over 150,000 more live in the remaining sites in four different regions.

While the protection sites offer increased access to basic necessities like healthcare and education, the displaced communities within them continue to grapple with problems facing South Sudanese society at large, such as issues of leadership and tribalism.

"Even here there is a hierarchy system wherein individuals are nominated to serve on a community council for six months," said Christopher Kayongo, a former UN Volunteer who came along to share his knowledge as a recent addition to the recovery and reintegration team. "The transitional period between leaderships, which will be coming up shortly, is critical and can lead to a lot of conflict."

Fast forwarding 24 hours, we find Andrey and Olga in a small conference room at the mission’s second compound on the other side of Juba, where deliberations of another sort were set to transpire.

Packed in rows surrounding an oval table flanked on each side by the unmistakable sky-blue UN flag, folks of all nationalities and ages donning formal and casual attire alike were sitting attentively. What they all shared was that they were part of the UNV family, whether serving as one or managing the program from near or far.


We have heard amazing things about your work in South Sudan. This doesn’t mean that you are not facing challenges, but I wanted to start off by letting you know from our side that we really appreciate what you do. --Njoya Tikum, manager of the UNV Regional Office for East and Southern Africa in Nairobi, Kenya

These were the opening remarks of a lively town hall meeting meant to serve as a forum for volunteers to ask questions and provide feedback for managers. Dozens more UN Volunteers from eight UNMISS offices across the country were zapped in via computer projector.

"I thought I was starting to have back problems, but after a doctor’s visit I realized it was just the mattress. When I asked for a new one, I was told that only women could get them," said one impassioned participant whose hand gestures moved in sync with his billowing voice.

Perhaps this is not exactly what the mediators had in mind when they opened up the floor in democratic pursuit, although it did make for a good chuckle.

Just as the flurry of queries related to salaries, future career prospects, and benefits began to wind down, a voice from a far corner of the room chimed in. The subsequent monologue broke the course of discussions completely.


When I first started, South Sudan only had eight qualified midwives and an extremely high maternal death rate. That number is now dropping.  Do you know what this means? It means you are giving the gift of sustainability to a country that desperately needs it. --Judith Dealeru Maturu, a young nurse from Uganda volunteering with the United Nations Population Fund at Juba’s teaching hospital, where over the last several years she has trained over 700 nurses and midwives.

Judith;s story is a testament to what UN Volunteers can do for the underprivileged, especially where scores of thousands of citizens come to live under the protection of the UN after losing so much in clashes that have tested their nascent nation over the years.