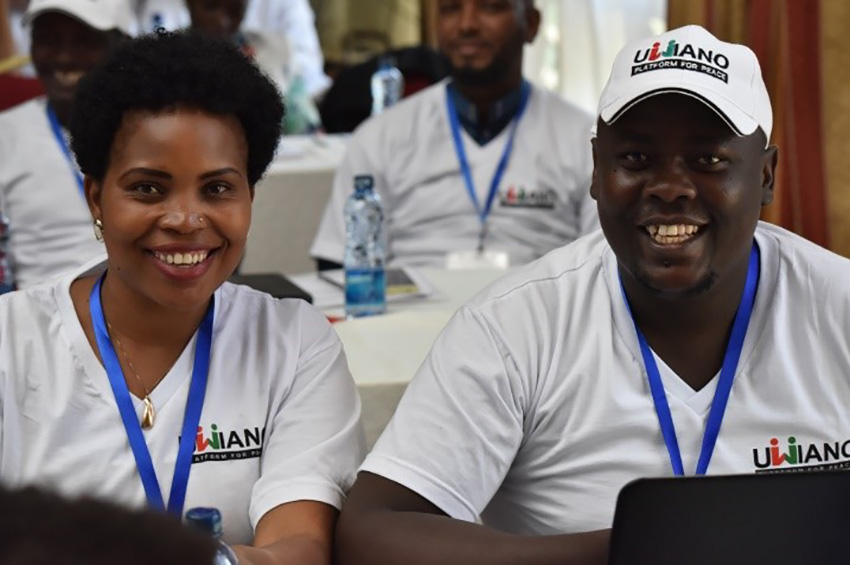 Mr. Castro Barasa (right), one of the 12 UN Volunteer peace coordinators during the induction training. Twelve UN Volunteers are working closely with over 200 peace and cohesion monitors during the 2017 General Elections in Kenya. (UNDP Kenya, 2017)

Kenya is holding general elections next month. On the ballot are candidates for the Presidency and members of Parliament. UN Volunteers are on location, assisting the process. Elections are the cornerstone of a representative democracy, giving citizens the opportunity to freely chose leaders that will lead the nation on their behalf. The process provides a crucial opportunity for citizens to shape their governing structures and fashion leadership that resonates with their aspirations and vision for national development.

The United Nations Development Programme (UNDP) in Kenya is offering ongoing support in preparation of the 2017 Kenyan general elections. 12 UN Volunteers are on location serving with monitoring counterparts, contributing to UNDP’s support of the electoral process. Their work is part of the Deepening Foundations for Peacebuilding and Community Security project, implemented with multiple national and local partners through the National Directorate for Peace Building and Conflict Management (NSC/PBCM) programme and the Strengthening National Capacities for Conflict Prevention joint-programme of UNDP and the Department of Political Affairs (DPA).

12 UN Volunteers have been deployed as Cluster Coordinators to collaborate with a team of more than 200 peace and cohesion monitors across the country to prevent electoral violence. They are serving as strategic linkages for the National Steering Committee (NSC) and the National Cohesion and Integration Commission (NCIC) as well as programme partners and key actors from County institutions at the County Level. "I will be part of creating linkages for Early Warning SMS system between the community structures and the response agencies in a bid to enhance electoral violence reduction initiatives," stated Nelly Waiya, UN Volunteer Peace Coordinator for Nairobi County. The UN Volunteers were mobilised with the support of the Swedish Development Agency (SIDA), the United Kingdom Department for International Development (DfID) and Kenya’s Ministry of Interior and Coordination of National Government. 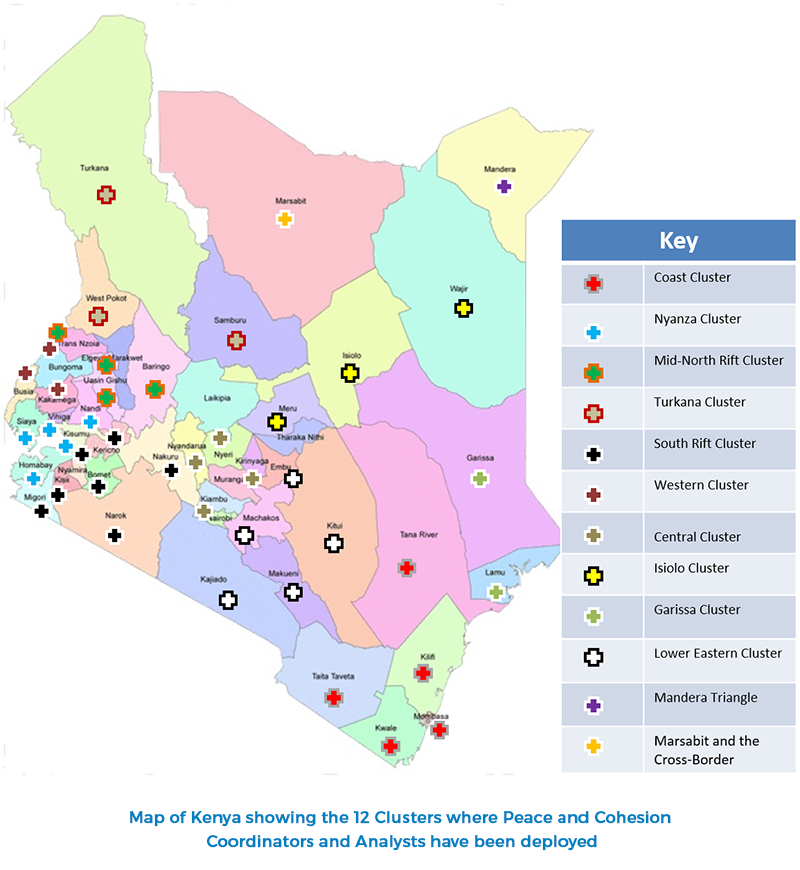 The programme is expanding institutional mechanisms for coordination, risks assessment, and early warning and response in the 2017 elections and beyond. The goal is to align the electoral process with devolution strategies and embed at the same time infrastructures to safeguard peace and cohesion within the County Governments and community structures. 47 counties, clustered into 12 zones, have deployed Peace and Cohesion Coordinators and Analysts tasked with coordinating, monitoring, and provision of early warning support to mitigate the risk of conflict and protect human rights.

Additionally, UN Volunteers are supporting County Peace and Cohesion Forums and ensuring that Peace Structures at the county, sub-county, ward and village-levels are established and constituted respecting the County Conflict Prevention, Management and Resolution Strategies put into place.

In his closing remarks at the end of the two-day training for the elections Peace Monitors, Mr. Siddharth Chatterjee, UN Resident Representative in Kenya, acknowledged the wide scope of stakeholders engaged in the peace process and congratulated the Peace Monitors for their dedication in protecting and nurturing Kenya’s democracy. He encouraged Peace Coordinators be agents of peace, and help nurture constructive political discourses based on the foundation of trust and mutual respect among all citizens.


For the first time [in Kenya], we are witnessing a strategic shift from ad hoc and fragmentation to a coordinated approach in order to maximize the different knowledge, skills and influence you all bring to bear on promoting a peaceful environment for elections,” noted Mr. Chatterjee.

At its best, the electoral process can be an enabling mechanism where citizens have a voice to decide and chose their elected representatives based on the issues and policies that drive development at national and community-levels. Elections, as witnessed in the past experiences, can also be triggers for violence and widespread instability if not well managed, with implications of widespread costs for any country. This clearly indicates a need for active efforts geared towards prevention of electoral violence and mandates the role of UNDP and these dedicated UN Volunteers.