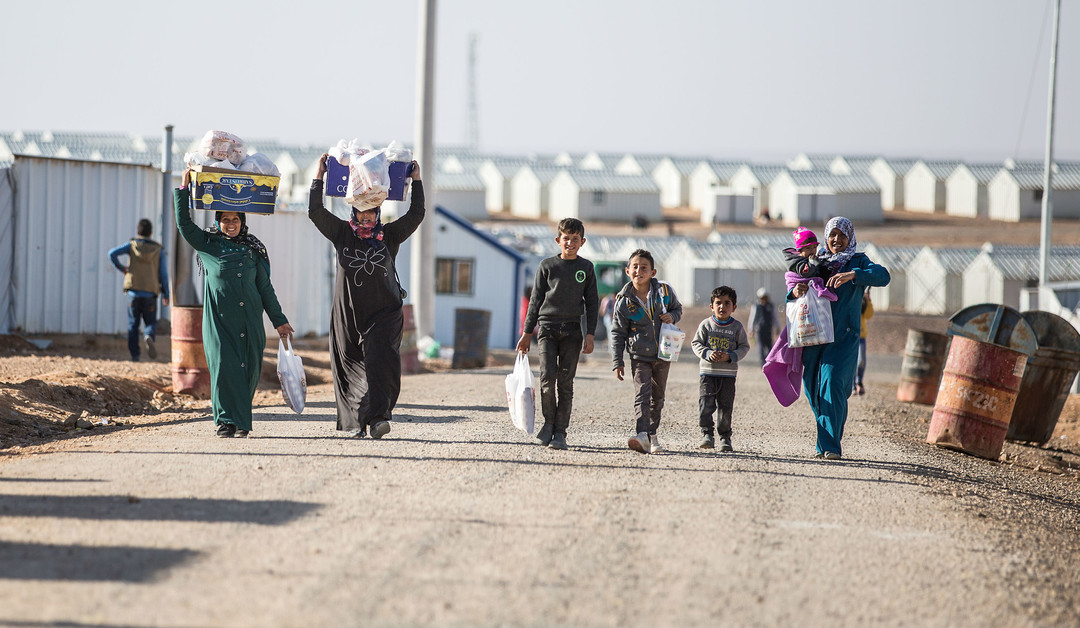 Syrian refugees in the Azraq camp in Jordan (2015).
CARE International

“Sometimes we only had dry bread and water”: volunteering brings life and hope to Azraq Camp

By mid-2015, around 20,000 Syrian refugees resided in the Azraq camp in Jordan. An incentive-based volunteer programme allowed residents to make a revenue, and 1,800 of them were already participating in the only income-generating mechanism available in the camp. At the time, the programme included both skilled and unskilled volunteers who earned respectively up to US$12.75 and US$8.50 US dollars per day. People identified as vulnerable or with skills were given priority.

In 2014, Thunayya fled her city of Al Qunaytra and the war that enveloped it. She lived in the camp ever since, and decided to volunteer as a cleaner, earning about US$8.50 per day. At the age of 48, it was the first time Thunayya had ever worked, as she had to provide for herself and her 85-year old father, her only dependent.

“When we arrived, CARE staff visited us and explained that I could volunteer for an incentive if I registered for an opportunity,” says Thunayya. “I did it shortly after, but had to wait over eight months before I could start working at CARE’s daycare.” Most volunteer positions were for three months, but individuals could reapply.


“I reapplied and am volunteering as a cleaner at CARE’s community center, but I preferred working at the daycare,” explains Thunayya. “I used to make about US$12.75 per day there. I spent my time playing with children and teaching them pleasant things.”

When asked how she prioritized the purchases she made with the incentives she earned, Thunayya immediately put her elderly father’s needs first. “He loves fruits and vegetables, and we cannot afford these with the e-cards we receive. Sometimes he is prescribed medication that I can only buy with money. Once, he was really sick so I had to take him out of the camp to a doctor in Mafraq city – I had to pay for all of that.”

Thunayya used World Food Programme e-cards for basic grocery shopping, such as oil, rice, and canned food, but sometimes the family’s needs were greater, making them dependent on the money she earned from volunteering.

Forced to get married when she was 14 years old, Thunnaya separated from her husband after eight months and has been alone ever since. Besides her father, she has a widowed sister with five children under 14 years. “She does not have any source of income,” says Thunayya of her sister. “She is the only other family member I have in Azraq. My three brothers now live in Lebanon.”


Earlier in 2015, a designated market area in Azraq camp was built for refugees, aimed at providing more options for purchasing goods and services, while allowing camp residents to work and earn an income.

Thunayya is one of many Syrian refugees looking forward to the market opening. “People’s situation here would become much better if the market opened,” explained Thunayya. “Groceries in the supermarket here are expensive and not everything is available. I have bought things from outside the camp, where they were much cheaper. I also wish to see more vocational courses for women, such as knitting.


Her personal dream is one, she says, that is shared by many others: “I just wish for happiness and comfort. Isn’t that every human being’s ultimate wish?”

At the time the article was released, in July 2015, over 4,000 refugees at Azra camp had already applied for the incentive-based volunteer programme.