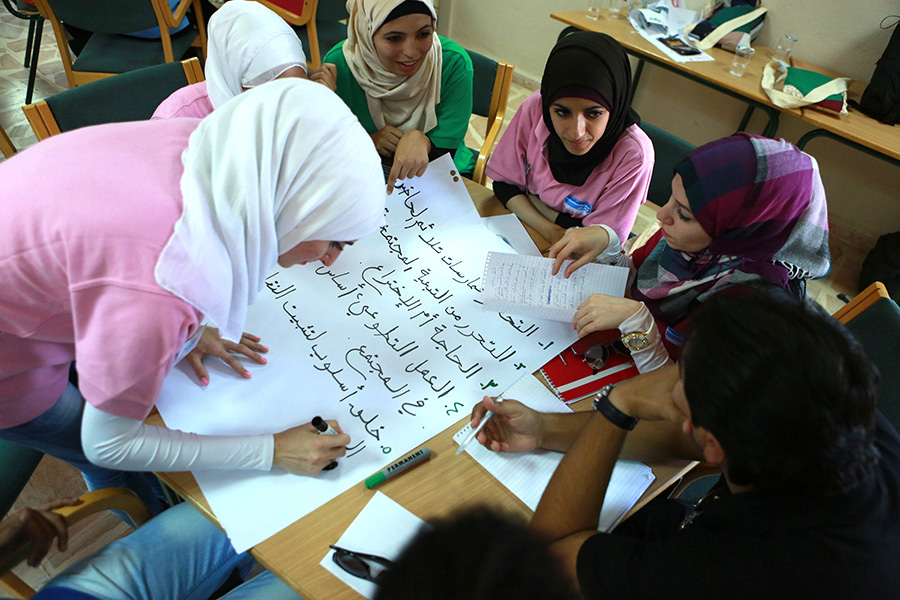 Participants in the Youth Volunteer Summer Camp in Jordan, organized as part of the UNV Arab Youth Volunteering for a Better Future project, brainstorm about the importance of volunteerism (UNV, 2013).

Volunteerism is a message of peace against terrorism

The willingness to do good, to help others, to give, and to provide relief to the needy, are all inherent qualities of Arab culture. Volunteerism is visible throughout the region when we see, for example, the inhabitants of villages in Sudan gathering during the harvest season to cooperate without expectation of pay or material return. Much remains to be done, however, to engage Arab youth at the community level and create opportunities for their inclusion and participation through volunteerism.

There are different interpretations of the concept of volunteering across cultures and regions, and this is equally true within Arab countries. When a wealthy citizen reacts to a natural disaster by offering to contribute money, or makes donations of blankets and food to the people affected by the disaster, this is often seen as voluntary and therefore volunteerism. Charity is a vital component of humanitarian assistance, but it is not volunteerism. Volunteering is best illustrated by the actions of a person providing their time, their expertise and experience to others in need without expectation of material compensation, for example, when a doctor extends unpaid treatment to patients who cannot afford medical care in times of illness.

There are fundamental issues that need to be addressed in the Arab world before it is possible to scale up the social benefits of voluntary work.

Solid volunteering infrastructures, institutionalization of volunteerism, development of structured approaches to guiding and coordinating volunteer involving organizations (VIOs), and the establishment of networks between local and global actors, the private sector and the government, are all needed to pave the way for channeling joint plans and new mechanisms to include volunteerism into the development strategies of the region.

Engaging with youth through volunteerism has potential to also reduce the threat of terrorism and extremism. Research exists that links this dangerous phenomenon with the exclusion of young people from decision-making; emphasizing that the proactive engagement of young people can pull the rug from under the feet of a terrorist movement, and hamper the spread of its ideology among young people.

There is an important need to promote and recognize the role and contributions of volunteers and volunteerism in the Arab States.

The United Nations Volunteers (UNV) programme has been supporting volunteerism in the Arab world for many years. A recent project, the Arab Youth Volunteering for a Better Future Programme, was launched in five countries: Egypt, Jordan, Tunisia, Yemen, and Morocco. Initiated in 2011, the purpose of the Programme was to rely on volunteerism to engage both Arab youth and their governments while developing the skills of young people and including them into decision-making processes within their societies to avoid their ongoing marginalization and rising dissatisfaction.

In each country, workshops brought together key stakeholders and gave them the opportunity to consult with youth in the Arab Region and express a variety of views on volunteerism. Aiming a ‘bottom-up’ approach that avoided imposing a development agenda from the top, it was hoped that the successes of the initial five-country pilot could be replicated and expanded to other Arab States.

The pilot regional programme ended in 2016 with varying degrees of success. Results were primarily affected by the prevailing conditions in each country.  The conflict in Yemen, for instance, erased all hope of establishing sustainable activities, while other countries experienced political shifts that affected commitments agreed upon by previous governments. The Programme’s achievements in the Kingdom of Morocco, however, do stand out from the rest.

Across the Arab region, much more needs to be done.

The transcript was translated from the original Arabic into English with the kind assistance of UN Online Volunteer Souha El Jisr.