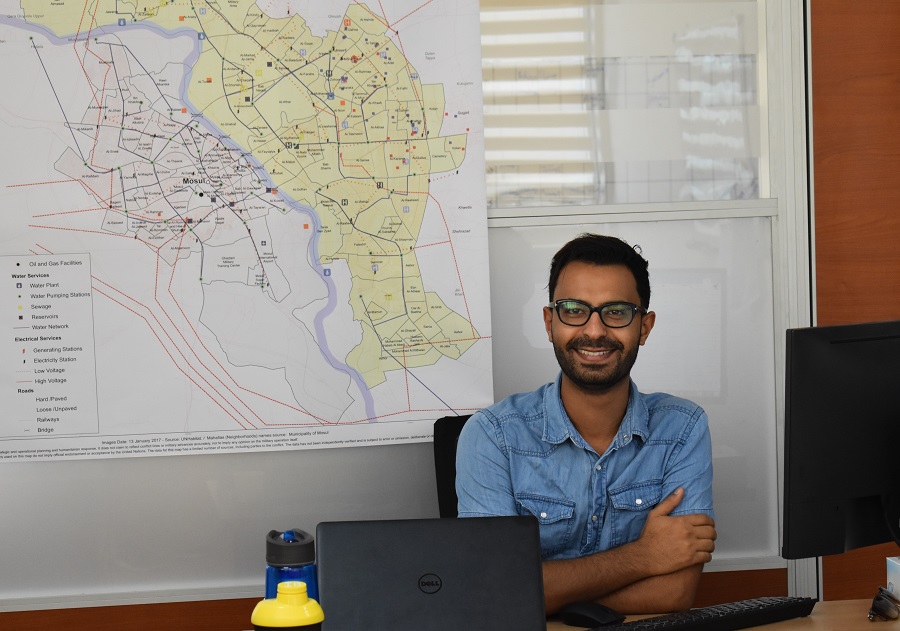 Mustafa, a 29-year-old from Yemen, is serving in Iraq as a UN Volunteer. “I think it’s very useful to apply my experience to a country like Iraq. Sharing experiences from different conflict zones can help beneficiaries in their recovery process," he says.

Mustafa Al Soufi, a 29-year-old from Yemen, has just started serving as an international UN Volunteer in Erbil, Iraq. He arrived in Erbil at the end of June 2018 and joined the Funding Facility for Immediate Stabilization (FFIS) at UNDP Iraq.

“As a Yemeni citizen who came from a conflict zone, I think it’s very useful to apply my experience to a country like Iraq, which has many similarities with Yemen in terms of security challenges and culture. Moreover, sharing experiences from different conflict zones can help beneficiaries in their recovery process,” he explains.

As Livelihoods Project Officer, Mustafa is working closely with vulnerable Iraqi returnees, who once were displaced and are now returning to places that have been liberated from the Islamic State of Iraq and the Levant (ISIL) in Mosul Governorate.

“This is the second time I’ve served as a UNV. The first time was in Yemen,” he says. “In 2013, I was recruited in Sana’a as a national UN Volunteer, which was a turning point in my life. It was an honour to lead the Arab Youth Volunteering for a Better Future project in my country, and I learned a lot about the potential of volunteerism.”

After this experience, Mustafa – who holds a degree in English Literature – continued to work in the humanitarian field, both in Yemen and in South Sudan, where he served as a Project Manager for an international NGO. In Yemen, he joined UNDP as a Youth Development Specialist, becoming National Focal Point for the Youth Peer Education Network (Y-PEER).

While Mustafa is currently based in Erbil, he often travels to Mosul, a city severely damaged by the war against ISIL. In such a challenging environment, he’s tasked with quality control of livelihood activities supported by UNDP.

Being a volunteer in Iraq means listening to the stories of the people who lost their homes or loved ones. It means encouraging them to regain hope after most of them gave up. My reward is to go back home at the end of the day knowing that many people will remember me and appreciate the work that I have done for them -- Mustafa Al Soufi, UN Volunteer with UNDP Iraq

Mustafa supervises the implementation of Cash for Work projects in Mosul. “We believe that the main mechanisms for jumpstarting the local economy are work programmes such as rubble and debris removal, painting of schools and public buildings as well as desk repair,” he explains. “These programmes incentivize displaced people to return to their homes in addition to receiving a daily income for their basic needs." The Livelihood project has a powerful link with Sustainable Development Goal (SDG) number 16: Peace, Justice and Strong Institutions, as this programme focuses on peacebuilding.

Mustafa’s upbringing in Yemen helped him to feel closer to Iraqi refugees and better understand their needs. His family is still living in Yemen in a small village near Ibb in the south of the country. “It’s very difficult for them to flee out of Yemen as it was for me,” he explains, “but I am sure that one day I will go back and help my country and rebuild it again,” he says.

According to the UNV Regional Manager for Arab States, Europe and CIS Jason Pronyk, UNV continues to attract experts from the region, like Mustafa, a Yemeni citizen who supports UN partners in the recovery and reconstruction processes underway in Iraq.

As argued in the UN’s flagship publication on volunteerism The Thread that Binds, Mustafa’s work is an example of where volunteerism and community resilience interact across diverse sectors.

“The report demonstrates how volunteerism contributes to building this resilience, weaving a strong social fabric for these communities,” said Achim Steiner, the UNDP Administrator. UNV is ready to support all partners, at scale, to build resilience.