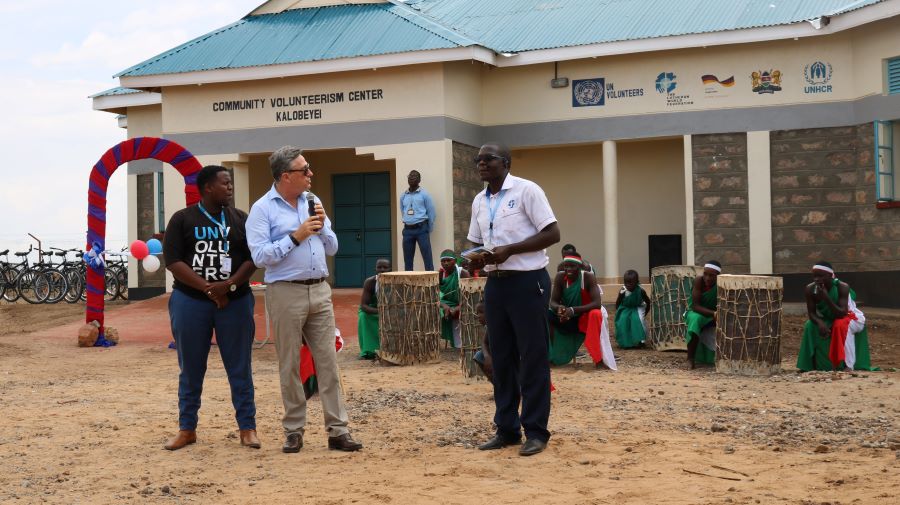 Executive Coordinator, Olivier Adam, with UN Volunteers at the opening of the second Community Volunteer centre in the Kakuma refugee camp in Kenya (UNV, 2018)

Kakuma refugee camp, located in the Northwest of Kenya, plays host to approximately 191,000 refugees from 20 different nationalities, with the majority being from South Sudan and Somalia. Under the guidance of UNHCR, UNV and other developing partners have developed volunteer initiatives with refugees in the camps. These activities enhance community security and refugee protection through refugee engagement, with a particular focus on women and girls.

The enhancing security, co-existence and protection through refugee outreach volunteer’s project in Kalobeyei was launched in 2017 by UNV. The project, funded by the German Ministry for Economic Cooperation and Development (BMZ) was implemented by Lutheran World Federation LWF with support from the UN Refugee Agency (UNHCR). In Kakuma, it is the first time that a UN Agency piloted a refugee youth volunteer project through an organized structure.

Recognizing the untapped potential of youth in Kalobeyei to contribute to their communities the project sought to empower and build their capacities to allow them to achieve this. It gave Ojulu and other youth in Kalobeyei an opportunity to engage in something bigger than themselves and to be the drivers of the change and solutions they want to see.

The project piloted the principles of volunteerism among the youth from both refugee and host communities with the objectives of promoting self-management and peaceful coexistence within the settlement as well as uplifting protection standards by ensuring dissemination of key protection messaging.

101 refugee and host community members formed the inaugural group of outreach volunteers in Kalobeyei. Amongst the volunteers were 65 male and 37 female from various nationalities including South Sudan, Sudan, Ethiopia, Congo, Burundi, Rwanda and Kenya.

After receiving a number of tailored trainings, the volunteers played a key role in raising awareness and community mobilization on issues such as epidemics, hygiene promotion and peaceful co-existence. In June 2018 for instance, there was an increase in reported cases of cholera in Kalobeyei. Kenya Red Cross partnered with the volunteers to undertake a massive awareness campaign at the neighborhood level on hygiene promotion and action to prevent epidemics. The prompt intervention by Kenya Red Cross and the volunteers curbed the spread of the disease; a true testimony on the effectiveness of community level intervention.

In June, 2017 Ojulu, a refugee from Ethiopia,  first arrived in Kalobeyei settlement. The move was part of a camp consolidation and closure exercise that saw the relocation of non-Somali refugees from Dadaab complex to Kakuma refugee camp in Turkana County.

Since 2018 Ojulu has been a UN Volunteer with UNHCR working as part of the protection team.


From the start I was challenged by the energy, enthusiasm and drive of the volunteers. My role was to enhance their capacity to promote community responses to risks and build partnerships with the youth. In the beginning, the volunteer’s discussion forums were largely centered on challenges they were facing in their respective communities however, with time the narrative shifted. Discussions were more and more focused on practical solutions and ways they could intervene to address those challenges. Over the months, I watched them evolve to be more knowledgeable, confident in their role and become widely accepted in their communities. This was quite an achievement, states Ojulu.

Aside from being an outreach volunteer, Ojulu doubles up as the manager for one of the community volunteerism centres in Kalobeyei, Village two. In this capacity, he is in charge of the day to day running of the center including bookings and management of resources.  Two centers equipped with a sports field and solar powered electricity were established to provide a safe space for community dialogue, sharing knowledge, workshops, discussions on thematic areas, recreational and sport activities. Students from nearby schools have also been able to access the centers after school to catch up with their studies and have group discussions. Olivier Adam, Executive Coordinator of UNV, recently travelled to Kenya for the opening of the second community centre.

28 year old Mohamed Hassan Mohamud was the very first refugee volunteer with UNHCR Kenya. Having lived in the camp for 20 years and worked as an incentive staff and community leader, the opportunity to join UNHCR as a volunteer was life changing.


After being an incentive staff for so long, finally I have been given an equal chance for true empowerment, states Mohamed.

Thank you to Grace Oonge, UN Volunteer with UNHCR Kakuma for contributing this story to www.unv.org