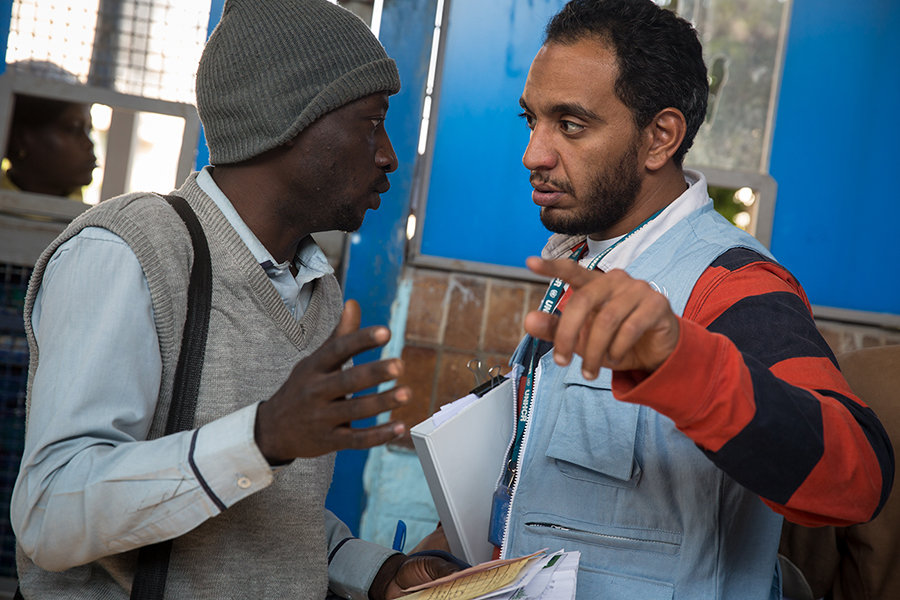 In January 2015, I became UN Volunteer Reception Coordinator for UNHCR in Cairo. I became the face of UNV. I was receiving asylum seekers Syrian and North African. People would start lining up from eight in the morning. Queues of the desperate and the tired. A crowd of humanity wanting a ray of hope. I, somehow, became their hope.

Cairo, Egypt: My name is Mohammad Abbas. I am a national UN Volunteer in Egypt. An accountant for many years, I was really unhappy with my job. I wanted out. I got my chance in 2014. I became a Community Service Intern with the Office of the United Nations High Commissioner for Refugees (UNHCR). Interacting with people, guiding them, answering queries were all part of my job. In January 2015, I became UN Volunteer Reception Coordinator for UNHCR in Cairo.

I became the face of UNV. I was receiving asylum seekers Syrian and North African. People would start lining up from eight in the morning. Queues of the desperate and the tired. A crowd of humanity wanting a ray of hope. I, somehow, became their hope.

UNHCR Cairo operates from two offices, one for Syrians, the second one for Africans, Iraqis and refugees from all other regions. I was hired as a Reception Coordinator Front Liner for the second office. We receive more than 100 applicants per day. We have three windows, all meant for a different purpose; i.e. for counseling and queries for registered refugee and asylum seekers; for emergency cases and a quick response for serious medical conditions; and the last one for senior citizens and minors.

In addition to the three windows, there is a separate door that is assigned for new cases of asylum where people queue up in very large numbers. Most frequently asked questions are dealing with resettlement, refugee status determination, financial and medical assistance, and educational grants. My job entails providing these applicants with information and filling their forms. I also identify the most vulnerable cases to make best service of the capacity we have. We have 120,000 registered applicants but we don't have the capacity to serve them all with our limited funds.

What I consider most precious about this job is to be able to listen to everyone's problems and offer some compassion. For the refugees, they have someone they can talk to who can perhaps try to find a solution, who represents their chance of some respite from their never-ending plight. I recall the story of a Sudanese refugee, classified as a trouble maker due to his circumstances of coming from a conflict zone. He was registered with the office for more than 10 years and was seeking resettlement.

He gave me a hard time when I first started working on the reception. Blocking the entrance gate and the queue, trying to break in to the office to cause disruption were all part of his trouble making. One day he came to me to renew his refugee card in order to obtain his residency permit from the Egyptian authorities.

I vividly remember how concerned security was as his reputation had preceded him. I acted with composure and helped him with his paperwork. The last I heard from him was in November 2015 when he came to say goodbye before leaving for resettlement to USA. It's the trouble maker who left a lasting impression on me and my work, and somehow his story gave me something to be happy about. I am volunteering to help refugees and my work has meaning!