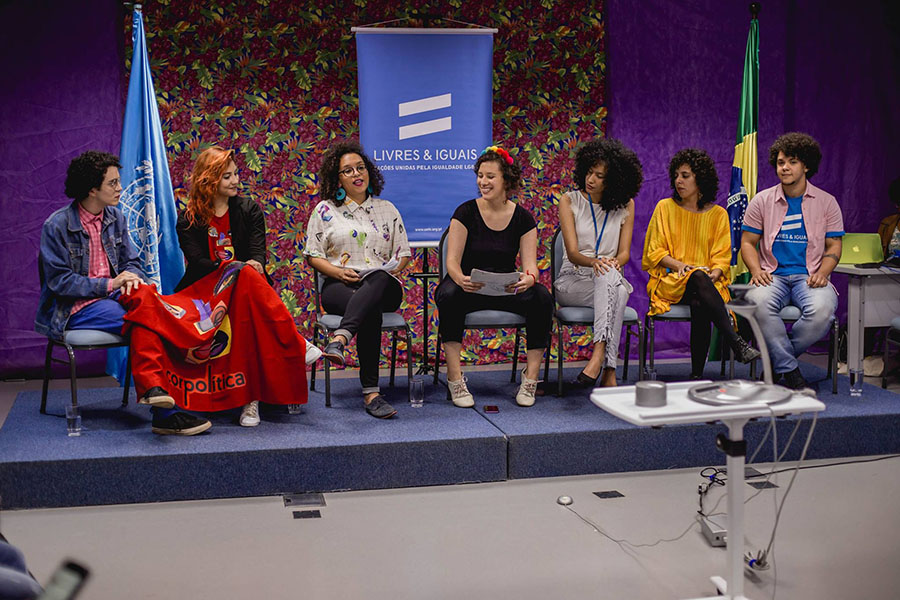 Workshop about the United Nations and LGBTI rights with LGBTI activists in Brazil in 2016.
(UNV, 2016)

Leaving no one behind: how UNV contributes to promoting equal rights and visibility for LGBTI people

My identity as a Latina lesbian woman from the Brazilian northeast (the country’s poorest region), with a thing for human rights and social justice issues, is an element that has always guided me when making decisions about the type of career I wanted to pursue and the type of organization I would like to work for. It was through an assignment as United Nations Volunteer, joining the Human Rights team at UN Brazil’s Resident Coordinator’s Office, that I earned the privilege of becoming one of these people who love their jobs and truly believe in what they do.

As a UN Volunteer, part of my assignment is supporting the implementation of the UN Free & Equal campaign in Brazil. Free & Equal is a global, unprecedented initiative by the Office of the High Commissioner for Human Rights (OHCHR), launched in 2013, to promote equal rights and fair treatment for lesbians, gays, bisexuals, transgender and intersex people (LGBTI). In Brazil, our national UN Free & Equal campaign was launched in 2014. Since then, it has reached out to millions of people with a message of LGBTI equality, empowerment and visibility.

For the last two and a half years, I have been working closely with civil society organizations, activists, governments, businesses and other stakeholders to disseminate UN human rights standards on discrimination and violence based on sexual orientation, gender identity and/or sexual status, through organizing workshops and participating in events.

I have also contributed to the making of videos, interviews, pieces and other public information material for UN Free & Equal in Brazil, and had the opportunity to meet amazing human beings with powerful stories, such as Avelino Mendes Fortuna.

Since 2017, a project I helped conceive has been implemented in Brasília, aiming to empower trans activists. Trans-Formation consists in a series of workshops that provide political formation on several human rights issues relating to the demands of the trans population in Brazil, as well as a Mentorship Programme that links participants with inspiring professionals working in all kinds of fields and organizations, to whom they can later on turn to in their activism. As a result, we have trans activists more equipped to do what they do best, trans civil society networks more active than ever, and partnering institutions aware of trans issues and effectively involved in promoting trans rights. Trans-Formation is already in its second, very successful edition.

Teaming up with other UN agencies, funds and programmes in Brazil has also led to great outcomes. For instance, in 2017 we published an information booklet about the rights of LGBTI people in forced displacement with the United Nations Refugee Agency (UNCHR) in Brazil.

So far, one of our greatest achievements was having UN Free & Equal in Brazil recognized as the largest, longest and most ambitious UNFE national campaign. We were testimony to LGBTI activists and civil society organizations in Brazil becoming stronger, and were by their side when they earned long demanded-for rights, such as being able to use chosen names in all federal public services (in 2016) and having gender identity legally recognized without having to file long, expensive law suits (in 2018).

I learned that these victories do not come by chance, but are indeed the result of the hard work of those who have been in the trenches for LGBTI equality for years: civil society itself. I also learned how the United Nations can contribute to promoting positive change, creating the conditions and the enabling environments needed to advance human rights standards and to facilitate dialogues between stakeholders. Lastly, I also learned that volunteering is a powerful tool to catalyze these processes.

Concerning the UN as an organization, from the inside, I could see in the UN Volunteers programme a breath of fresh air. The 2030 Agenda command to “leave no one behind” implies and requires that the United Nations look for ways to foment greater diversity among its staff, attracting and retaining new talents who are invested in the mission our organization. I believe UNV to be a fundamental part of that strategy.