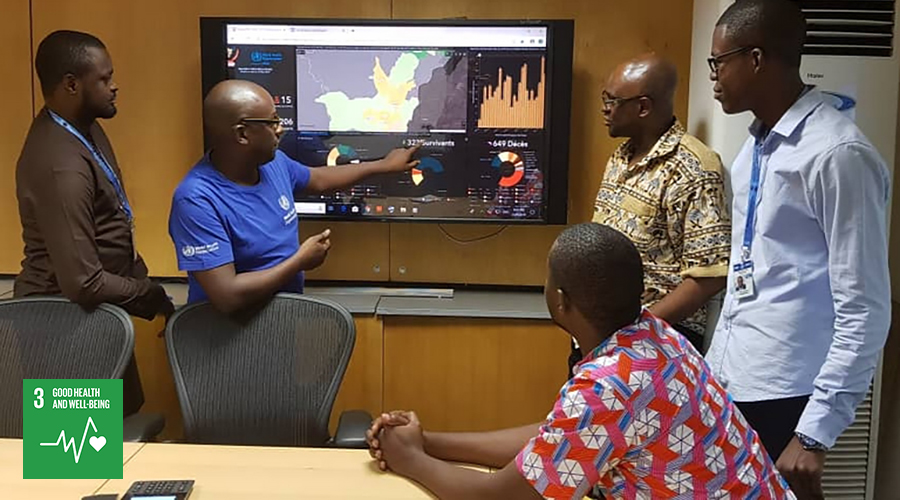 From its regional office in Brazzaville, the World Health Organization (WHO) can count on the presence and the engagement of the United Nations Volunteers (UNV) programme in addressing health emergencies and outbreaks in Congo and 46 country offices in Africa. In June 2018, the two organizations deepened their partnership through a Memorandum of Understanding signed to facilitate the deployment of UN Volunteers to WHO offices in the field.

UN Volunteers have operated through various assignments in the health sector with WHO, since the beginning of the partnership in 1973. The engagement of UN Volunteers in WHO health programmes has increased steadily since then, as a result of UN Volunteers’ professional input to the preparation and implementation of emergency response plans to disease outbreaks, such as Ebola in West Africa, which remains a threat.

In 2018, 221 UN Volunteers served with WHO worldwide. Of these, 34 UN Volunteers, including 27 internationals and 7 nationals, supported the WHO regional office for Africa in efforts to improve the good health and well-being of the populations.

It is very interesting working with UN Volunteers who come with different backgrounds, academic qualifications and experience. They are fairly well qualified in their own fields and their talents add great value to the work of the organization.  It is an amazing growth point through which many more persons should go to sharpen their potential and contribution to global health. Indeed some have ended up joining the organization and I can see them rising to become future leaders in health. --Dr Prosper Tumusiime, Acting Director of Health Systems and Services at the WHO Regional Office for Africa

UNV has provided WHO with volunteers in varying assignments, such as health and communication officers, medical doctors, epidemiologists, and in roles supporting health informatics. logistics, facilities and response, including in emergencies.

Jean Paul Kimenyi is one of the UN Volunteers currently serving WHO in Brazzaville and has participated in field missions in the response to Ebola outbreak in DRC. As an international UN Volunteer, the Rwandan Epidemiologist deployed to the WHO Health Emergencies programme is playing key roles in the department of Health Information.

His efforts are geared towards protecting health and saving lives in outbreaks and emergencies, which is part of the mission of the Health Emergencies programme to help Member States build their capacity to manage health emergency risks, lead and coordinate the international health response to contain outbreaks and to provide effective relief and recovery to affected populations.

His work is focused mainly in the detection of diseases and outbreaks, verification and risk assessment in the African region and he supports the WHO country offices in Africa in matters of health information management.

Since he started working with the programme in 2018, Jean Paul contributed to the detection of 130 new events and in the development of at least eight rapid risk assessment reports over the 35 conducted by Disease Verification and risk Assessment team on outbreaks that occurred in African region.

I contributed in the preparation of the public health emergency weekly bulletin of the Africa regional office, producing a dashboard of events. In total, I assisted the drafting of 265 articles, thus helping evaluate main needs at  field level and orient interventions to reduce disease outbreak risks.

Jean Paul Kimenyi also reports that once an outbreak is verified, he proceeds with the risk assessment to weigh the impact of the outbreak on the affected community population, the risk of the outbreak spreading in the community and the capacity of the country to respond to the outbreak.

"The level of risk we attribute to the outbreak allows the operation team to organize intervention to support /respond to the outbreak in the affected communities," he further states.

With the last Ebola virus disease outbreaks in Congo’s North Kivu and Ituri provinces and an expected increase in the number of cases reported by week, WHO has set the alarm bells ringing, and called for more action to reduce the risk of spreading the virus. As of 26 March, a total of 1,029 confirmed and probable Ebola virus cases have been reported, of which 642 died.

In this sense, the ongoing engagement of UN Volunteers like Jean Paul to the outbreak response has yielded some success.

Jean Paul was deployed at the Coordination Office for two months to support the Ebola outbreak response in Mbandaka, a city in the Democratic Republic of Congo on the east bank of the Congo River, with a population estimated at between 700,000 and 1.2 million.

His role was central within a multidisciplinary team including epidemiologists, clinicians, water and sanitation specialists, logisticians and risks communications officers from different organizations.

Jean Paul lead a team of 20 supervisors of community health workers in charge of tracing persons that have been in contact with Ebola affected patients in different communities. "During that deployment, we used to work out of working hours to make sure that we have not missed any contact to be followed. We succeeded to follow up all of our contacts without any of them becoming sick during the 21 days of quarantine," he shares.

A win for everyone

According to WHO Director-General Dr Tedros Adhanom Ghebreyesus, the partnership between UNV and WHO is "a win for everyone. UN Volunteers bring valuable skills and experience, and boost our collective strength to support communities in the area of public health, which benefits our work and the ultimate goal of more healthy people throughout the world".

After signing the MOU, Olivier Adam, UNV Executive Coordinator explained that the agreement between UNV and WHO "will create even more opportunities to deploy specialized UN Volunteers – particularly women – in support of WHO’s delivery"