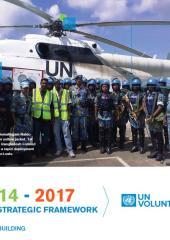 Volunteerism generates forms of social capital that are indispensable to peacebuilding, and plays an important role in aiding the development of national civilian capacities to accompany peacebuilding processes. For over four decades, UNV has played an integral part in supporting the work of the United Nations in peacebuilding. Since 1992, in particular, UNV has been supporting the implementation of Security Council-mandated peacekeeping and special political mission mandates, including peacebuilding offices.