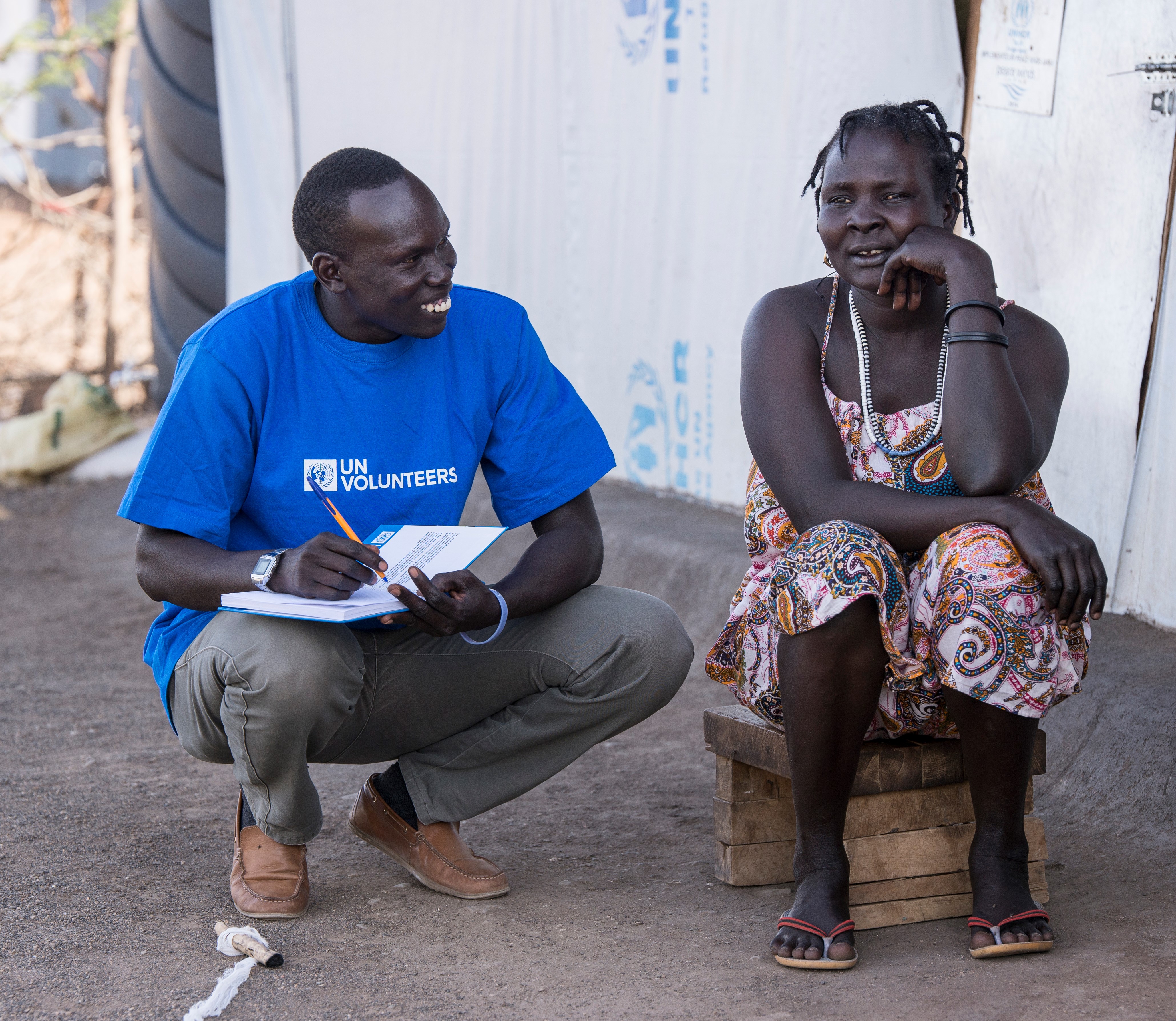 One of the Refugee Volunteers, Ojala, conducting a community survey in the Kakuma refugee camp in Kenya.
(UNV, 2018)

Kakuma refugee camp, located in the Northwest of Kenya, plays host to approximately 191,000 refugees from 20 different nationalities, with the majority being from South Sudan and Somalia. Under the guidance of UNHCR, UNV and other developing partners have developed a pilot volunteer initiatives with refugees in the camps. These activities enhance community security and refugee protection through refugee engagement, with a particular focus on women and girls. Grace Oonge has been working as a national UN Volunteer for the project and shares with us her story during this year's World Refugee Day.

On 21 June 2017 Ojulu, a refugee from Ethiopia, first arrived in the Kalobeyei settlement. The move was part of a camp consolidation and closure exercise that saw the relocation of non-Somali refugees from the Dadaab complex to the Kakuma refugee camp in Turkana County.

“When I first arrived in Kalobeyei everything was new. I left my work, family, friends in Dadaab and was entering a new place,” Ojulu explains.

In 2015 the Government of Kenya, the Turkana county government and UNHCR agreed to develop an integrated settlement in Kalobeyei aimed at promoting self-reliance through enhancing livelihood opportunities and supporting inclusive service delivery. This was Kenya’s first concrete step towards actualizing its commitment to the Comprehensive Refugee Response Framework signed in 2006 in New York.

Kalobeyei settlement, comprised of 3 villages, is not only a first in the country, but is also a leading example of refugee socio-economic integration among UNHCR operations. Implementing a unique model to the refugee response, programs in the settlement focus on building self-reliance and empowering refugees to be actors of change through promoting socio-economic integration between refugees and host community.

At first, Ojulu struggled to adapt to the new life in the settlement. “Settling in was also very hard, for the first few months I had nothing to do - which was very difficult and stressful. I would spend most of the day sleeping or hanging out with friends which was not very productive.”

In 2017, UNV launched the ‘Enhancing security, co-existence and protection through refugee outreach volunteers’ project in Kalobeyei. The project, funded by the German Ministry for Economic Cooperation and Development (BMZ), was implemented by Lutheran World Federation with support from UNHCR. In Kakuma, it was the first time that a UN agency piloted a refugee youth volunteer project through an organized structure.

Recognizing the untapped potential of youth in Kalobeyei to contribute to their communities, the project empowers and builds their capacities. It gave Ojulu and other youth in Kalobeyei an opportunity to engage in something bigger than themselves and to be the drivers of change and solutions they want to see.

101 refugee and host community members formed the inaugural group of outreach volunteers in Kalobeyei. Amongst the volunteers were 65 male and 37 female from various nationalities including from South Sudan, Sudan, Ethiopia, Congo, Burundi, Rwanda and Kenya.

After receiving a number of tailored trainings, the volunteers played a key role in raising awareness and community mobilization on issues such as epidemics, hygiene promotion and peaceful co-existence. In June 2018 for instance, there was an increase in reported cases of cholera in Kalobeyei. Kenya Red Cross partnered with the outreach volunteers to undertake a massive awareness campaign at the neighborhood level on hygiene promotion and action to prevent epidemics. The prompt intervention by Kenya Red Cross and the volunteers curbed the spread of the disease - a true testimony on the effectiveness of community level intervention.

I joined the project in 2018 as a United Nations Volunteer with UNHCR working as part of the Kalobeyei Protection team. From the start I was challenged by the energy, enthusiasm and drive of the volunteers. My role was to enhance their capacity to promote community responses to risks and build partnerships with the youth. In the beginning, the volunteer’s discussion forums were largely centered on challenges they were facing in their respective communities however, with time the narrative shifted. Increasingly, the discussions were more focused on practical solutions and ways they could intervene to address those challenges. Over the months, I watched them evolve to be more knowledgeable, confident in their role and become widely accepted in their communities, states Ojulu.

Aside from being an outreach volunteer, Ojulu doubles as the manager for one of the community volunteerism centers in Kalobeyei, Village two. In this capacity, he is in charge of the day to day running of the center including bookings and management of resources.  Two community volunteerism centers equipped with a sports field and solar powered electricity were established to provide a safe space for community dialogue, knowledge sharing, workshops, discussions on thematic areas, recreational and sport activities. Students from nearby schools have also been able to access the centers after school to catch up with their studies and have group discussions.

For Ojulu the volunteerism project not only gave him the opportunity to give back to his community, but also to lead and acquire management skills. “I came to realize that there is so much I can do to support people in my community.  This project has touched many lives. It has brought people together and changed the lives of many youths who previously never had anything to do.”

For me, implementing this project was an important learning curve both personally and professionally. It required a change in mindset which contrary to my expectations came a lot easier than I anticipated. Although I cannot relate to the struggles the refugee volunteers have been through, their immense potential and determination inspires me. Meeting and working with the youth outreach volunteers made me a better humanitarian worker. I will always passionately advocate for youth empowerment after seeing how much more youth can achieve with just a little support.