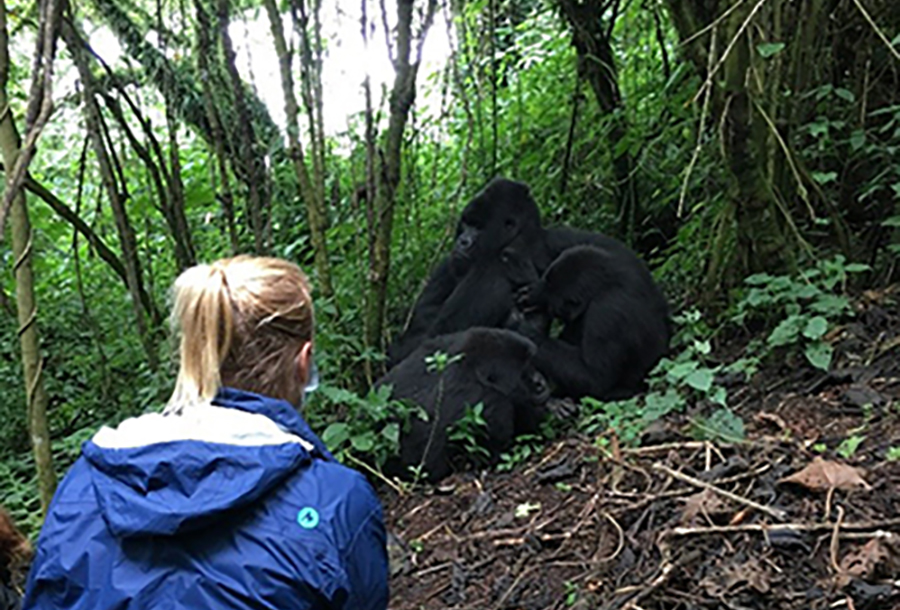 Linda Jonsson, UN Volunteer Programme Support Specialist with UN Environment, observes a gorilla family during a field trip to Virunga National Park, Democratic Republic of Congo."Sitting only two meters away from a gorilla family, that feeling is indescribable and surreal," she shared.
(UNV, 2018)

Some 50 UN Volunteers are dedicated to preserving biological diversity in East and Southern Africa. Serving with UN Environment, they are fighting climate change, conserving natural habitats, reducing unnecessary waste and plastics, and contributing to the achievement of Sustainable Development Goals 13 (Climate Action), 14 (Life Below Water), and 15 (Life on Land). UN Volunteers Dorris Chepkoech (Kenya) and Linda Jonsson (Sweden) fight the declining animal populations in Africa through their assignments with UN Environment in Kenya and Tanzania.

Biological diversity, meaning the variety of plants, animals, and microorganisms, is under threat: according to estimates of the World Wildlife Fund, we are losing at least 10,000 species every year – and 99 percent of them are at risk from human activities. In 2016, we reached a record of global tree cover loss with 29.7 million hectares vanishing signifying a 51 percent increase from 2015.

This global loss of biological diversity is unprecedented and a worrying threat to all human development. The African continent is no exception: Sub-Saharan countries are losing forests faster than anywhere else and researchers have warned that Africa could lose up to 30 percent of its species by the end of the 21st century.

Even tourist magnets such as elephants and gorillas are under threat. While elephant poaching is on the decline, populations continue to fall and seizures of large-scale illegal ivory shipments were even at record highs in 2016. In East Africa, elephant populations have nearly halved in a decade.

The wild mountain gorillas living in Rwanda, Uganda, and the Democratic Republic of Congo (DRC) have been brought to the brink of extinction by civil war, poaching, and deforestation. Gorilla trophies are popular and their meat is sold at high prices on the black market. While only around 250 mountain gorillas were left in the 1970s, awareness campaigns and stricter laws have brought the population back to 880 in the 2010-2011 census. However, humans continue posing the biggest threat for them.

"I am passionate about protecting our wildlife and in particular the elephants," Dorris says about her work. "The most challenging part of my work is dealing with the devastating news of illegal killing of elephants." In Kenya, 47 elephants were killed in 2017; while this signifies a critical decrease from 86 poached elephants in 2016, there are still many steps to be taken.

"We try to create more awareness on the importance of elephant conservations to reduce these illegal killings and illegal trade," continues Dorris. Human-elephant conflict poses a major problem in African countries. Such conflicts arise particularly as the elephants' habitats become smaller and food becomes scarce as a consequence. When elephants then turn to crops as a substitute, farmers lose their livelihoods, and kill or hurt elephants in retaliation.

We try to reduce human-elephant conflict, with capacity building for local communities to educate them on the importance of wildlife conservation. For example, we have trained 40 farmers living close to Mole National Park in Ghana to use chili pepper and canister-blasting methods to reduce conflict with the elephants. Such modern techniques safeguard the farmers' crops while not harming the elephants. --Dorris Chepkoech, national UN Volunteer with the African Elephant Fund established by UN Environment

Biological diversity is also under threat in Tanzania. For example, the Selous Game Reserve in the southern part of the country, which is larger than Switzerland, has lost 90 percent of its elephant population due to poaching in the last 40 years. International UN Volunteer Linda Jonsson from Sweden works for UN Environment as a Programme Support Specialist in Dar es Salaam to fight poaching and other practices harmful to biodiversity and environment. Next to raising awareness on single-use plastics and managing waste, she works on anti-poaching efforts and projects to reduce human-elephant conflict, such as wildlife corridors.

One of Linda’s most memorable experiences during her assignment was a trip to Virunga National Park in the Democractic Republic of Congo to observe other countries’ conservation efforts: "That’s when I felt more driven than ever to continue my work on environmental conservation," she says.

"We trekked through the national park with the rangers and found a gorilla family of five members. The most heartwarming moment was when the ranger lowered their weapons and put them on the ground. This is when you realise that these animals are harmless. Sitting only two meters away from a gorilla family, that feeling is indescribable and surreal."

Gorillas in Virunga National Park continue being a major target for poachers to be sold at Asian markets. Today, the park is home to half of the circa 900 wild mountain gorillas left in the world. Protecting the last gorillas from extinction is a dangerous job; 150 rangers have been killed in Virunga National Park in the last 20 years. "It was interesting to see how the rangers operate. This environment is very hazardous and the work the rangers do is beyond courageous, as they risk their lives every day to save an entire species from extinction," says Linda.

I strongly believe that if our hopes of building a better and safer world are to become more than wishful thinking, we will need the engagement of volunteers more than ever. --Linda Jonsson, international UN Volunteer with UN Environment