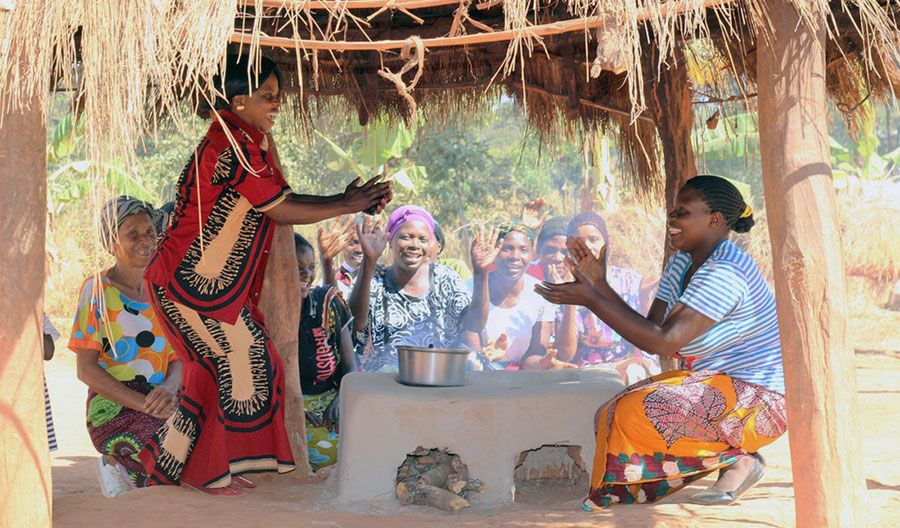 A partnership of the United Nations Development Programme (UNDP) and Global Environment Facility (GEF) is promoting energy-saving stoves in rural communities in Zambia in support of the government’s efforts to curb deforestation, clean up cooking, save lives and curb climate change. This initiative is supported by 14 national UN Volunteer Community Liaison Assistants, placed with UNDP, who are raising awareness on the sustainable use of natural resources and the need to protect forests.

It’s half past midday in Kawama Village in Northwestern Zambia and Mildred Kikwanda is busy preparing 'Nshima' – the staple maize meal – with chicken stew and vegetables, using a non-traditional means of cooking – a wood-saving, earth-block stove popularly known as the energy-saving stove.

Beaming with a smile, and with a blue colourful ‘chitenge’ (wrapper) tied around her waist, she takes some ‘mealie meal’ (maize flour) from a sachet and sprinkles it into a boiling water while briskly stirring it with a cooking stick to make it thicker.

Cooking over the traditional three-stone open fire makes me cough a lot and the smoke hurts my eyes too... it gives me teary eyes with a running nose.  But this stove produces less smoke and I do not cough anymore. --Mildred Kikwanda

For the 25-year-old mother of two, collecting firewood daily from the nearby game reserve in Kasempa District was a risky and laborious task, particularly when she was already busy rearing goats, looking after children and doing household chores.

Like many women in rural Zambia, Kikwanda has used firewood to cook for as long as she can remember. With the help of a UNDP-supported project, she recently replaced her traditional three-stone open-fire hearth with an energy-saving stove.

According to the 2015 Living Conditions Monitoring Survey Report by the Central Statistical Office, only four percent of Zambia’s rural people have access to electricity, and wood fuel or charcoal constitute a major source of energy for cooking, accounting for over 80 per cent of the total number of households nationwide.

The Government of the Republic of Zambia has set a goal for universal electricity access for all Zambians by 2030. Energy has been identified as an important driving force behind economic development in Zambia, and the government has declared its commitment to developing and maintaining energy infrastructure and services. 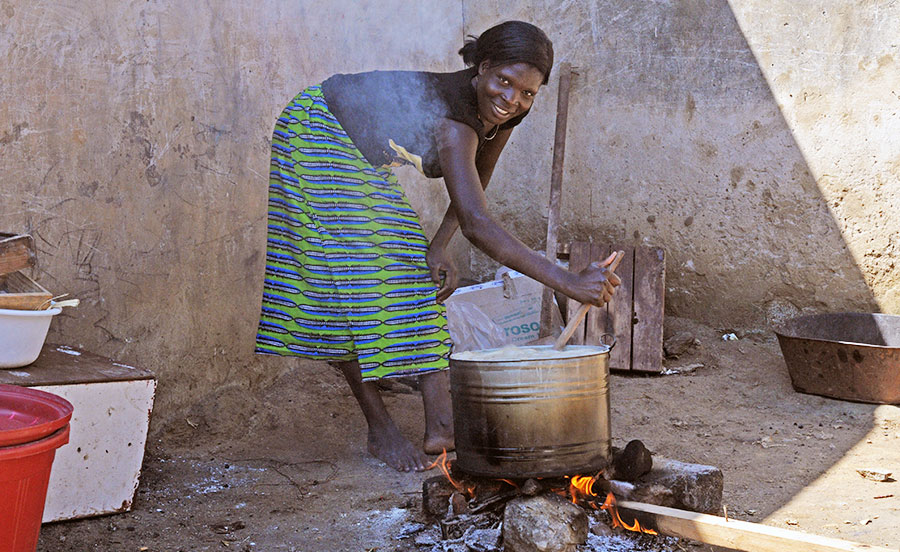 The UNDP-GEF project helps rural communities in Zambia who are almost entirely dependent on forests for firewood move away from the use of wood, as this practice has been identified as a major health risk due to toxic smoke and one of the most significant causes of forest decline. (©Moses Zangar/UNDP, 2019)

With unreliable electricity, many rural families are often forced to depend on wood fuel or paraffin lanterns as a primary source of lighting or burning wood, which emit soot and harmful smoke. Experts say this not only can lead to premature death due to disease, but can also cause fire accidents and burn injuries, in addition to fuelling deforestation.

The use of open fires and solid fuels for cooking is one of the world’s most pressing health and environmental problems, directly impacting close to half the world’s population and causing nearly four million premature deaths each year, according to the Global Alliance for Clean Cookstoves. The health burden of this global challenge – suffering from toxic smoke, time poverty, and consequences of deteriorating environments – falls mainly on women and young children.

To address these challenges, the GEF is funding a bold new approach to community-based natural resources management through UNDP and in partnership with the government, to help cut forest loss, curb climate change – and simultaneously clean up cooking and reduce health problems.

The project – Strengthening Management Effectiveness and Generating Multiple Environmental Benefits Within and Around the Greater Kafue National Park and West Lunga National Park in Zambia – is promoting the conservation and management of forests in a sustainable manner, through the promotion of innovative initiatives such as community fire management and sustainable firewood harvesting.

The introduction and use of energy-saving cooking stoves supports the government’s efforts to expand forests, reduce poverty and promote the well-being of people, mainly women and children ---Winnie Musonda, UNDP Environmental Advisor

The project engaged 14 national UN Volunteer Community Liaison Assistants who have been critical in engaging local communities and fostering community ownership of the project activities.

"Volunteers make a difference to the communities by being active models of change. As such, the UN Volunteers work with people and organizations in local communities to link UN initiatives with local needs hence enhancing sustainability of UN interventions," says Sarah Anyoti, Regional Portfolio Manager at the UNV East and Southern Africa Regional Office.

Itezhi tezhi District Commissioner Hendrix Kaimana commends the UN Volunteers under the GEF project who have been helping the government to raise awareness around the impacts of illegal activities, such as poaching and charcoal burning. As a result, communities now understand the value of their forest and are now its voluntary guardians.

Every day, these UN Volunteers are spending time in sensitizing people to manage their nature resources sustainably.  As a result, the project has improved livelihoods for our communities, especially women and young people, and helped them understand the need to care for their environment. --Chief Kaingu of Itezhi tezhi District in the Central Province

In Nkeyema District in Western Zambia, Loveness Walubita, 42, has recently ditched a towering pile of neatly arranged logs collected by her husband from the Kafue National Park near their village home.

"The time I spend collecting firewood has been cut in half. I now use twigs instead of logs and I don't burn myself anymore and my eyes are much more comfortable," Walubita says, showing off her new stove.

This intervention is helpful for households in my district. The cookstove is something every woman will crave to have in her kitchen. The stove will largely free women from having to take the risk to seek out firewood in game reserves. --Albertina Mwanamwalye, Nkeyema District Commissioner

The stove – known locally as 'bitofu byankunyi', a Kaonde (a Bantu language spoken primarily in Zambia) phrase that means a stove that uses less firewood for food preparation – costs 100 Zambian Kwacha (US $7) to build and it is made from soil and other locally-available raw materials.

Kikwanda and Walubita are among beneficiaries from more than 5,000 households in Central, Western and Northwestern Zambia, who are now using the stoves.  The women said the shift to an energy-saving stove has saved them from the discomfort they suffered since childhood from the smoke produced by cooking over firewood.

In the Central Province, women are so impressed by the stove’s efficiency that they now use it to keep their children warm in cold weather.

"Prior to the introduction of the stove, cooking was such an uneasy and unsafe job for me. My kitchen would become smoky with black dust from burning firewood. The black ash would make me cough the whole day and cause soreness in my eyes,” another woman recounted.

The energy-saving stoves not only reduce air pollution, but significantly reduce firewood consumption and cooking times for women. --Peter Sinyungu, one of 14 national UN Volunteer Community Liaison Assistants with UNDP

The initiative has helped reduce demand for firewood in a country where the deforestation rate is at a staggering 250,000 to 300,000 per year – one of the highest in the world, according to UN statistics.

One way to lessen the pressure on forests and natural resources is to provide rural communities with alternative livelihoods to improve their incomes.. Conservation cannot happen without the participation of rural communities. --Director of Forestry, Ignatius Makumba

Using the stoves means fewer trees are felled in the nearby Kafue National Park and West Lunga National Park, where villagers traditionally source firewood and chop down trees to produce charcoal, a practice that fuels deforestation.

To encourage more households to use the stoves and consequently less firewood, the project has distributed two goats per household, with the requirement being that a household must have constructed an energy-saving stove before benefiting.

In partnership with the Ministry of Energy, the project has taught a select number of beneficiaries including women how to construct and maintain the stoves. Those trained are passing on the knowledge to others.

For Israel Dessalegne, UNDP Resident Representative (ai), the goal is not only to make the process of preparing 'Nshima' safer and cleaner, but to discourage indiscriminate firewood collection, especially from protected areas.