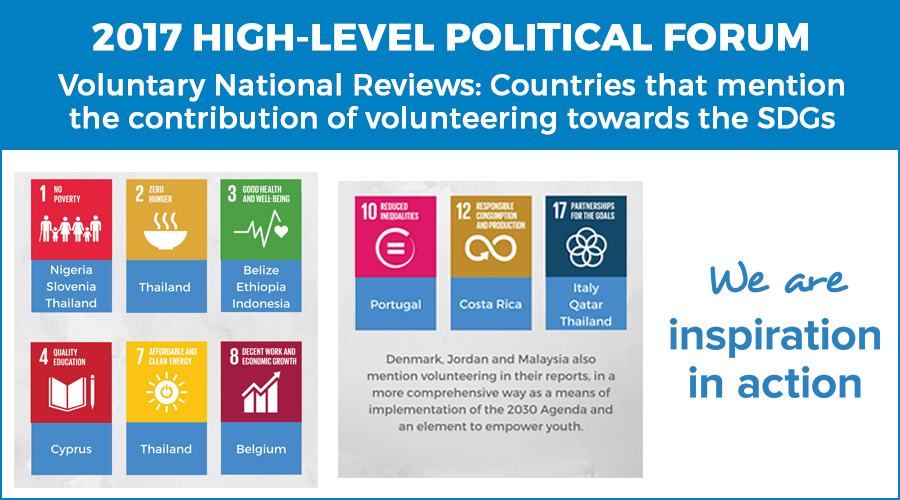 The graphic above shows where 17 countries have mentioned volunteers or volunteerism in their 2017 Reports. (UNV, 2017)

17 countries emphasise the value of volunteerism in achieving the SDGs

The High-Level Political Forum (HLPF) on Sustainable Development recently took place in New York, gathering more than 2,400 participants from around the world. 43 governments submitted their 2017 Voluntary National Reviews (VNRs), with 17 of them explicitly mentioning the valuable role of volunteers and volunteerism to achieving the Sustainable Development Goals (SDGs) within their countries.

The Voluntary National Reviews facilitate sharing experiences, successes, challenges and lessons learned, with a view to accelerating the implementation of the 2030 Agenda and the achievement of the SDGs. They are voluntary, state-led, undertaken by both developed and developing countries, and ideally involve multiple national stakeholders. The Reports are expected to serve as a basis for the annual reviews by the HLPF.

In addition to the 17 that explicitly mentioned volunteers or volunteerism, most of the Reports highlighted the role of people-driven initiatives and actions, much of which could not be achieved without volunteering, from service delivery to social activism.

Recognition of the role and contribution of volunteers took many forms—some Reports highlighted the role of volunteers under specific SDG goals and targets. For example, Guatemala’s Report recognized the work of 650,000 volunteer agricultural promoters in supporting food security efforts under SDG2 (ending hunger), and Ethiopia’s included information on a Woman’s Health Army to support infant and maternal health under SDG3 (good health and well-being).

Others, such as Jordan and Nepal, documented the role that volunteers had in producing the Report, through consultation, evaluation and review processes. Malaysia spoke about expanding partnerships with volunteer groups as a means of implementation of all SDGs, and made clear that these should be important partners in national development processes.

We can conclude from the HLPF 2017 that progress has been made towards the recognition of volunteers as a “powerful and cross-cutting means of implementation,” as set out in the Secretary General’s Synthesis Report The Road to Dignity by 2030. There is more to be done to ensure that the voices of volunteers are heard and their contribution to peace and development is systematically documented and recognized, but what we have seen in New York last month, is a very promising start.