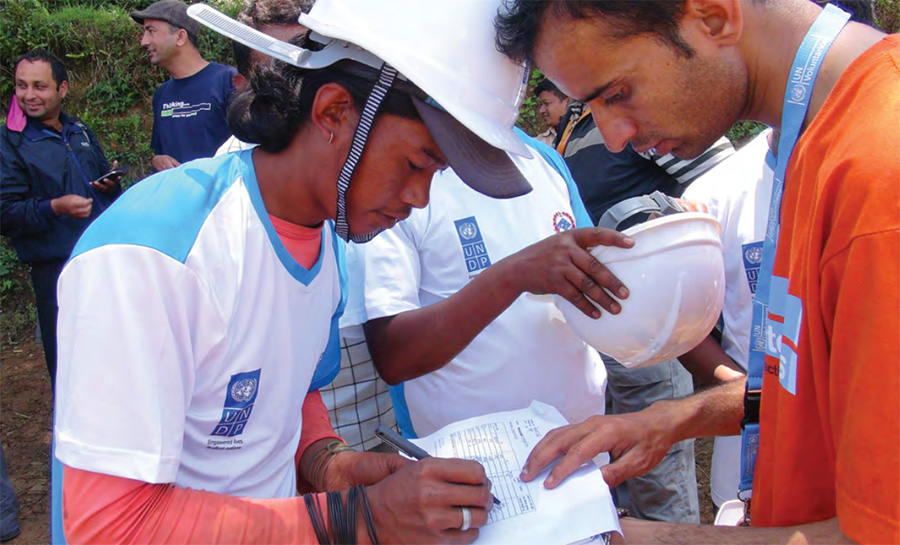 Rebuilding the earthquake-affected communities in Nepal

In the wake of the 2015 Nepal Earthquake, UNV partnered with the United Nations Development Programme (UNDP) to swiftly mobilize a total of 107 UN Volunteers who served in earthquake-affected sites to perform critical functions and deliver services to the victims.

The earthquake, which hit Nepal on 25 April 2015 with multiple aftershocks, brought about widespread destruction across the country and resulted in 8,790 deaths, 22,300 injuries and 755,549 houses that were either damaged or completely destroyed.

Mostly engineers by profession, including some experts in agriculture, forestry, accounting and administrative and logistical support, the UN Volunteers were integrated into the UNDP Demolition and Debris Management Project and the Comprehensive Disaster Risk Management Programme (CDRMP).

In coordination with UNDP experts on demolition, UN Volunteers undertook the structural assessment of public and private buildings damaged by the earthquake, including schools, health posts and monasteries.

Working in tandem with local volunteers and coordinated with important local bodies, such as the Village Development Committee secretary and the Ward Citizen Forum, they made door-to-door visits to households to conduct the assessment and performed the day-to-day oversight and quality assurance of debris clearance operations undertaken by the brigades.

They also supervised cash-for-work brigades comprised of people from the community which cleared vast quantities of debris scattered in the disaster-hit areas.

These activities were important in ensuring that no further fatalities resulted from such debris and that a sound physical environment was quickly restored, paving the way for the reconstruction of houses and public buildings. Working with different stakeholders and the local community, the UN Volunteers assessed 4,060 earthquake-damaged structures and led the clearing of 294,279.18 cubic meters of debris both from houses and public structures.

The cash-for-work scheme adopted in the debris management operations provided earthquake victims with much-needed emergency income that enabled the community to meet immediate needs. Women were deliberately targeted by UN Volunteers to be included in this scheme.

The engagement of UN Volunteers in CDRMP provided 16 CBOs with a sound understanding and practical experience of the different processes in the project management cycle and contributed to the efficient delivery of recovery assistance to the earthquake victims.

Furthermore, UN Volunteers facilitated the implementation of awareness-raising campaigns using a mobile van that travelled from community to community to bring information on earthquake-resilient construction principles to the local people.

The efforts of UN Volunteers were highly appreciated by people from the community who valued the fact that they travelled far to assist at a time of critical need. Working with local volunteers, UN Volunteers were effective in building rapport and quickly assimilating into the community to nurture trust and healthy relationships with the local people, essential requirements for the successful implementation of earthquake response efforts.

The spirit of teamwork, cooperation and solidarity – instead of a supervisor-subordinate relationship – was highly evident in the interaction between UN Volunteers and cash-for-work participants. Furthermore, the adoption of volunteerism as an approach in the UNDP projects enabled young people to serve as UN Volunteers, thereby allowing the youth to take part in the earthquake response while developing their individual skills and capacities in the process.

In January 2017, UNV launched the report Rebuilding with the Community after a Disaster: Volunteer Engagement in the 2015 Nepal Earthquake, which examines the role of volunteerism in the earthquake response efforts based on the work of UN Volunteers who served in the disaster-affected sites.