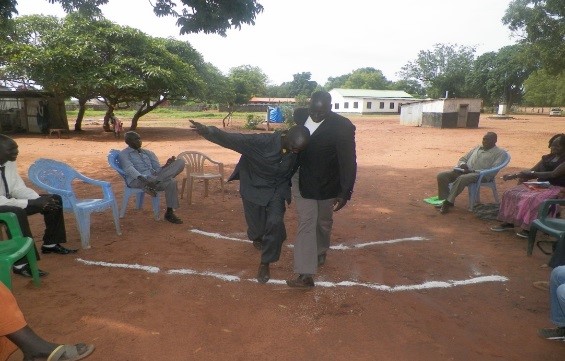 Community members participating in a learning tool called the river code. A role play activity that tries to address the role of alcoholism in the conflict in South Sudan (Photo: UNV South Sudan, 2015)

"Being a woman is not a problem, it is about what one can offer"

Jane Strapola Awuor Mala serves as a UN Volunteer Peace and Security Specialist assigned to the United Nations Development Programme; Community Security and Arms Control project in Juba, South Sudan. The project’s main purpose is to facilitate the transformation of conflict through community consultations based on constructing and implementing security plans to reserve security and peace.

Juba, South Sudan: Jane Strapola Awuor Mala serves as a UN Volunteer Peace and Security Specialist assigned to the United Nations Development Programme; Community Security and Arms Control project in Juba, South Sudan. The project’s main purpose is to facilitate the transformation of conflict through community consultations based on constructing and implementing security plans to reserve security and peace. As a technical team leader, Jane provides support to the Peace and Reconciliation Commission at national and state levels to develop capacity building and strengthen approaches, methodologies and tools for peacebuilding and conflict transformation.  She also supports programme development and implementation through research, analysis and monitoring management, and coordination of activities.

Jane’s exposure to volunteerism at a young age helped her realize the power behind the spirit and movement of volunteerism. “Engaging in volunteerism in my youth taught me that there is a lot to learn as a young person and one gains much more by engaging”. In her youth, she started off as a cadet with St. John’s Ambulance, where she served as a casualty support and emergency response volunteer in dispensaries and medical facilities in the slums of Nairobi, Kenya. She also volunteered at the Kenya National Theatre and later as a mentor in the Youth Mentorship programme with Foroige in Ireland.

As a UN Volunteer in South Sudan, Jane is proud of the impact the Community Security and Arms Control project has had on the community. She highlights the ability of the project to build confidence between ordinary citizens and the government and the increased number of community leaders and members who are now taking up the responsibility of peace and reconciliation as a few of the major accomplishments achieved thus far. Among the myriads of peace consultations Jane has conducted within the CSAC project, she is honored to have helped with empowering women and building their capacity in their communities. One of the tools she uses to do this is called the ‘song code’, through which women learn to unpack and decode songs to analyze the deeper meaning behind them. This in turn helps the women to easily comprehend and offer solutions around conflicts that are affecting them. By empowering the community to strengthen their own spheres of influence and rely less on external support, Jane has seen citizens take ownership in building bridges towards sustainable peace.

The project has also affected Jane on a personal level. She shares, “My experience has taught me to foster a ‘never give up’ attitude and approach when working on an initiative or a project that will create positive change.” This outlook on life proved beneficial when she was faced with the challenge of contextual bias on the positions and the functions of women working in environments that are more male than female dominated. She recalls a time when a senior government official stood up in a meeting and asked her to marry him. “As a woman, you are seen to be suitable for marriage. It forces you to sit back and wonder whether you are only seen as an object, maybe that’s too harsh of a word, but people reduce you to that woman who can only serve if married.”

Another gender-related challenge that she has experienced is being the only woman in situations that ‘usually’ call for male assistance. “In most cases when travelling, I am the only woman.  During the rainy season, road access is very difficult and the car usually gets stuck. I find it amazing that every time I jump out of the vehicle to help, the men ask, ‘What is wrong with you?’ and ‘You are a woman, you should not be doing this, why are you doing this?’. Whenever there is a challenge, the men ask ‘Jane, how are you going to cope here? This is not good for women’.”  Jane has worked hard to break through the stigma associated with people first seeing her as a woman, not as a professional. She believes, “being a woman is not a problem, it is about what one can offer. Staying consistently professional, being knowledgeable and dependable helps people to realize and accept that I can help and get the job done. Over time, I have learned that I do not need to focus on proving myself. I focus on being professional, and then that’s when people sit up and say ‘wow, she has a lot to offer’.”

In a predominantly patriarchal world, Jane has not just built her own credibility. Through her efforts, she has also given others the opportunity to set examples.  She is proud to be a UN Volunteer and to have a professional outlook. Through combining these two attributes she has successfully contributed to peace and security projects in South Sudan, while at the same time positively impacting on the social bias towards women in the community.

Bio: Mwango Mainda is an International UN Volunteer working as the UNV Advocacy and Programme Support Officer with UNV/UNDP South Sudan. She holds a Master’s in Peace and Conflict Studies from the United Nations mandated University for Peace in Costa Rica and a Bachelors in Communications from Grand Canyon University in Phoenix, Arizona. She is passionate about volunteerism and joined UNV because she believes it is a way of giving back to society.