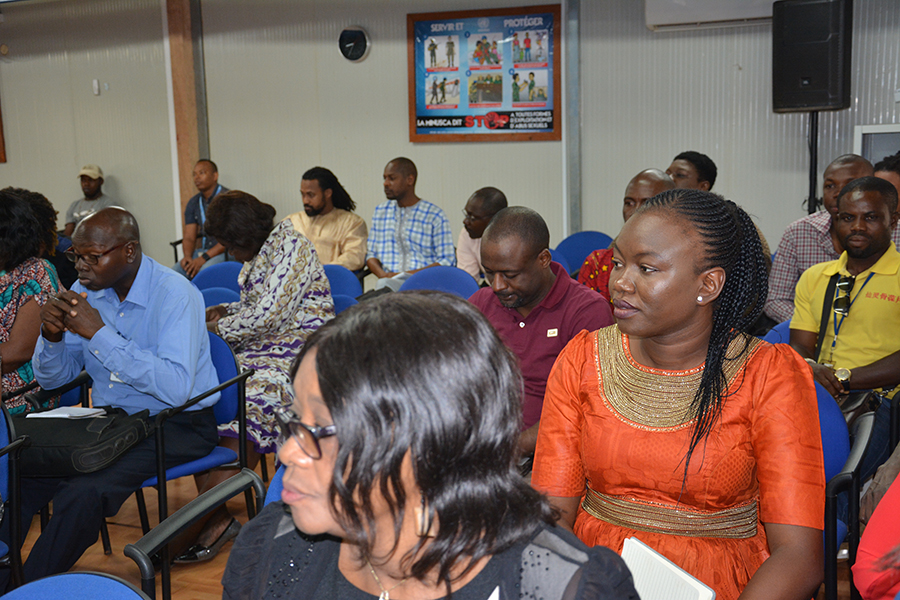 Some of the 241 UN Volunteers serving in the Central African Republic, most of whom are deployed with MINUSCA in support of its civil protection mandate, restoration of peace and the authority of the state.
(UNV, 2018)

In the grip of armed conflict and persistent community violence since the coup d’état in 2013, the Central African Republic relies heavily on the contribution of the United Nations Volunteers (UNV) programme to help promote peace and reconciliation in the country. Despite efforts towards social cohesion, the volatile security situation remains a predominant concern, with the risk of outbreak, escalation or recurrence of violent inter-community conflicts.

In communities hardest hit by conflicts, such as Bambari, Bangassou and Ndelé, UN Volunteers are at the heart of social cohesion, awareness raising, the restoration of state authority, capacity building activities or access to economic opportunities for populations suffering from the crisis.

Currently, of the 241 UN Volunteers in the Central African Republic, 199 (including 156 international and 43 national volunteers) are deployed to support the United Nations Multidimensional Integrated Stabilization Mission in Central Africa (MINUSCA) in its civil protection mandate, restoration of peace and the authority of the state.

The voice of reconciliation

Since 2015, François Gombahi from Côte d’Ivoire has been deployed in the Central African Republic as an international UN Volunteer with MINUSCA.

Based in Bambari, a town under perpetual threat of inter-community conflicts, François has become the voice of reconciliation between communities through his awareness-raising role, as a journalist and radio producer at GUIRA FM, the radio station radio created by MINUSCA to promote peace, reconciliation and the restoration of state authority.

When he arrived in Bambari, the Journalist described a "dead city", where freedom of movement was restricted, community tensions were high and people had no reliable news channel in their city and the rest of the country.

In this context, François immediately began to raise awareness on the situation in Bambari and its region, Ouaka, with a focus on the many challenges: reconciliation, coexistence among the different communities, socio-economic recovery.

He produced numerous reports on the redeployment efforts of the administration, local peace initiatives and community outreach activities, highlighting people's willingness to live together again.

"François Gombahi from Bambari for GUIRA FM - 93.3."  Central Africans, and the populations of Bambari in particular have become accustomed to hearing this signature at the end of each of his radio reports for years.

Looking at the commitment of the various local actors, with this great capacity for resilience driving them, I have great hope that Bambari will regain its former glory. Peace is a long-term endeavor and Bambari and the Central African Republic will end up getting there. --UN Volunteer Radio Producer with MINUSCA François Gombahi

Despite a volatile security situation, François, whom everyone affectionately calls ‘Mr. the journalist’, braves the dangers to bring positive information in favor of reconciliation in Bambari.

The Mayor of Bambari, Abel Matchipata, appreciates the important work of the UN Volunteer for peace in the region:

François Gombahi has produced excellent radio programs showing that the city is now moving towards peace and development. He regularly gives the floor to state actors, nongovernmental organizations and leaders of civil society, with a focus on women, in their various actions to bring peace in Ouaka. The people here will always be grateful for his investment for the benefit of the region. --Abel Matchipata, Mayor of Bambari

Soccer game for peace and social cohesion in Bangassou

When the conflict broke out following the coup d’état, Bangassou was among the most affected by inter-communal violence causing numerous deaths, destruction of property, and internal displacement of populations, mainly Muslims. Until now, internally displaced people in Bangassou are living in camps, with a burning desire to return to their homes.

Prior to the soccer competition, the UN Volunteers organized a meeting with the two communities as a means of increasing dialogue and reinforcing peace and social cohesion among them. During this meeting, the UN Volunteers took the opportunity to advocate for a total inclusion of both parties in the peace process and called upon them to refrain from resorting to violence.

UN Volunteers in the Central African Republic spearheaded other peace initiatives. In Ndelé, a border town of Chad and the Sudan, considered the cradle of the rebellion, they piloted a three-day workshop for nine civil society organizations, reports UN Volunteer Fagueye Sonko from the MINUSCA Civil Affairs Section.

The aim was to strengthen local capacity for social cohesion. The 50 participants in the training, including 17 women, showed a willingness to take part in the stabilization process. --Fagueye Sonko, UN Volunteer with MINUSCA

The workshop enabled participants to gain skills in the techniques of peaceful conflict management: negotiation, mediation and awareness-raising techniques, in order to be able to identify and defuse existing and developing conflict situations.