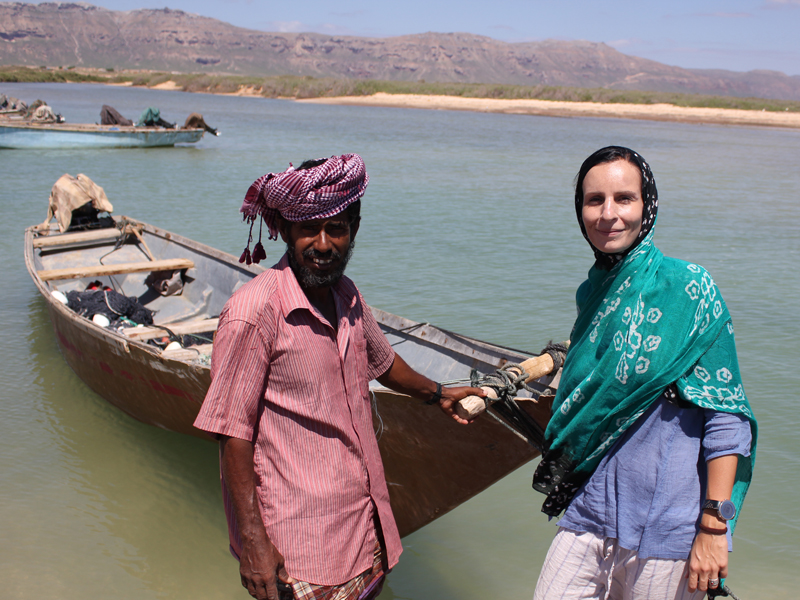 Fitting in on a remote Yemeni island

At first, local women kept their distance from Bohdana Rambouskova (Czech Republic), a UN Volunteer Communication Officer with the Socotra Governance and Biodiversity Project. After she offered free English classes to the girls and women on this remote Yemeni island, they extended their hospitality and started inviting her to social gatherings at their homes.

Socotra, Yemen: As a news editor of a foreign affairs column in the Czech Republic, I was supplying readers with depressing news about tragedies and wrongdoings from all around the world. My subsequent years in advertising gave me an impression that my work was fun but people would have had more pleasant lives without it.  I wanted to make myself useful, so I registered my profile in the UNV database of potential candidates for volunteer assignments.

I was lucky enough to get an assignment as a UNV Communications Officer in the Socotra Governance and Biodiversity Project, even though it means being stationed outside the UNDP team buildings and having an office in a distant outpost of the Ministry of Water and Environment. But as a project staff member, I have a great advantage – escaping from an administration building and being closer to beneficiaries; to the people I actually came to help.

My work on Socotra, a remote Yemeni island deep in the Arabian Sea, has brought me many challenges.  Upon arrival, we found the island idle since the previous UNDP project finished about a year ago.  We had to tackle local people’s expectations that everything would become as it had been before in terms of the number of jobs and salary scales our project would offer.   However our new project was designed in a completely different way.

Before anything else, I had to persuade my Socotri counterparts that I was really able to bring their island some benefits.  I kept hearing about the international persons who had come to the island and produced few results despite earning salaries enviable to many local people.

Therefore I was happy for all those tough meetings I had held with the most difficult clients from global businesses during my advertising career. I started harvesting the fruit of my years spent in the commercial sector for the Socotri people and was glad that I entered the UN system with previous work experience which is very much needed.

But there was one more challenge to be faced. In the traditional Muslim society of Socotra, my status was somehow unclear. Even though I cover my head and body in a proper way, I don’t belong among the local women. I spend most of my days in the public sphere among men, working with them and eating with them outside. In Socotra, my conduct spans common perceptions of femininity and masculinity. And while it is quite easy for me to enter the men’s world, the women’s was always kept separated from me, literally, by a high stone wall or, at the least, the thin fabric of a face veil.

That finally changed after I opened my free afternoon English classes for girls and women. Most were motivated only to see my house from the inside and dropped out after the first class.  Now there are only seven regular attendees. But, word of mouth is very strong on Socotra and all the female population of Hadibo knows that the “farangia” (foreign woman) teaches English.  Now, I have been invited to many houses even though their inhabitants do not attend my class. They teach me cooking, show me their jewels and we make henna decorations. I have been accepted.

And that is my greatest achievement so far: reaching the Socotri society, not only a part of it. I scaled the wall into the private sphere of Socotri women and I have been learning to communicate and get close to them.  And local women very soundly influence ways to conserve or destroy biodiversity.

On Socotra, volunteering does not finish with the working hours. I stay a volunteer 24 hours a day, representing western Western society and UNV values, approaches and rules.  That is a new experience that my previous jobs did not teach me. I have been learning to become a public person in a private sphere.