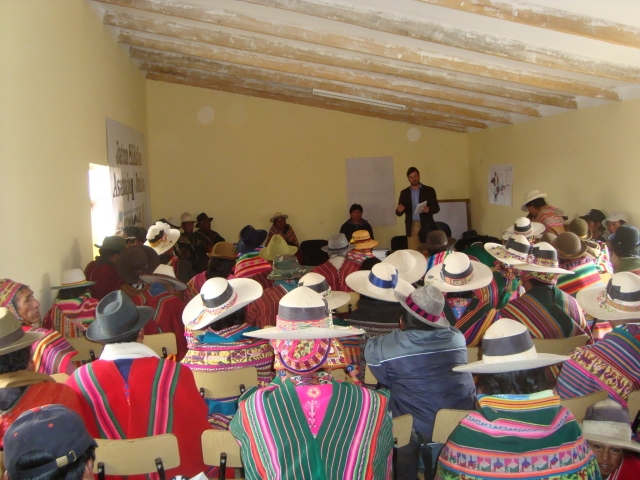 Arnaud Chaltin, international UNV Human Rights Specialist in the High Commissioner for Human Rights in Bolivia, during a workshop about the rights of indigenous peoples in Challapata. (UNV)

Promoting indigenous rights and fighting against racial discrimination in Bolivia

La Paz, Bolivia: My experience as a UNV Human Rights Specialist working with the High Commissioner for Human Rights in Bolivia is, after two years of work, exceptional.

At first, I served within the human rights monitoring unit, mainly to monitor trials for cases of particular interest to the office. Within this unit, I also participated in the election monitoring mission during the constitutional referendum. This experience taught me a lot, and was very useful for the next electoral monitoring missions during the presidential and legislative elections, and during the local elections. During both, I was appointed Head of Mission, and was pleased to realize the confidence that the office has in me.

Being an international UN Volunteer also enabled me to increase my knowledge about issues regarding the rights of indigenous peoples. This allowed me to be integrated into the new unit of the office dedicated to the protection of indigenous rights and the fight against discrimination.

During my first year as a UN Volunteer I worked mainly on the fight against racism and racial discrimination. In addition to the dissemination of international standards, we supported the organization of an event in parallel to the Durban Review Conference, and a seminar on best practices in the fight against racial discrimination. This in turn led to an assessment of the situation in order to establish an action plan against racism and discrimination in Bolivia, directed by the Vice-Ministry for Decolonization with the participation of NGOs, Ombudsman, Vice-Ministry for Decolonization, Ministry of Justice, etc.

This past year, however, I worked mainly on the rights of indigenous peoples. Bolivia is exceptionally rich in culture, with more than 36 indigenous groups facing very different realities and human rights problems. I had the chance to work with many of these people by giving training on human rights, and specifically on the rights of indigenous peoples. In addition, I was asked to follow up on some of the recommendations made by the Permanent Forum on Indigenous Issues following its visit to the Bolivian region of Chaco. For example, this report found, amongst other things, that forced labour and servitude persist in the area.

I also worked on the right to consultation, which I found very rewarding. In addition to organizing seminars and presentations explaining this right, I also had the opportunity to participate in and technically support one of the first processes of consultation with indigenous peoples about specific legislation. The right of indigenous peoples to be consulted is unfortunately not always respected, and since the UN Declaration on the Rights of Indigenous Peoples is relatively recent, it is not easy to find examples of the implementation of this right with regards to a legislative proposal, either in Bolivia or in the rest of the world. During this process, I also had the chance to participate in many rewarding discussions and debates on various aspects of legal pluralism.