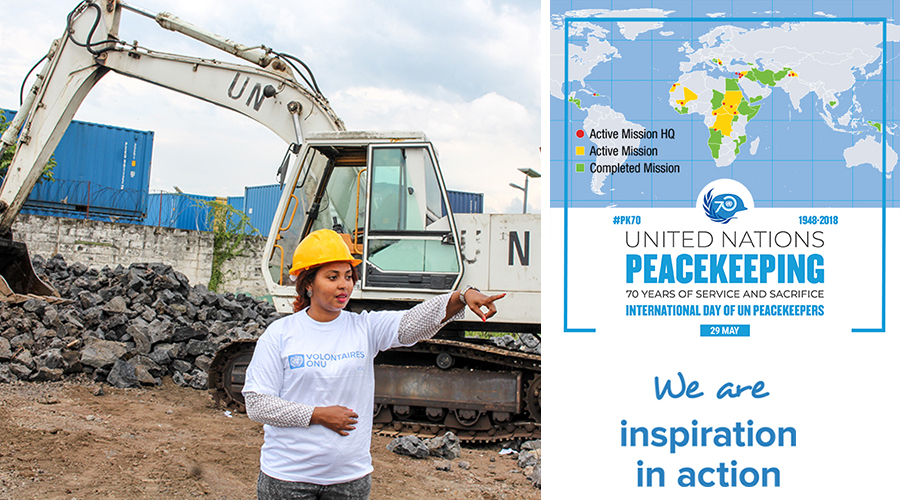 Hanan Ahmed, UN Volunteer supervising work progress of the terminal of the airport of Goma (North Kivu), in the Democratic Republic of the Congo.
(UNV, 2016)

May 29 marks the 70th anniversary of UN Peacekeeping, which remains as relevant today as ever. Nearly 90,000 troops and police, joined by over 14,000 civilians – including UN Volunteers – serve in 14 peacekeeping operations. Together, they make a tangible difference every day in the lives of hundreds of millions of the world’s most vulnerable people.

This year, the International Day of United Nations Peacekeepers is commemorated under the theme “UN Peacekeeping: 70 Years of Service and Sacrifice”.

The UN system and partners acknowledge the enormous contribution of UN military and civilian personnel to peace and stability through peacekeeping operations.

UN Peacekeeping is a key partner of UNV, and 2,169 UN Volunteers served with the Departments of Peacekeeping Operations, Political Affairs and Field Support in 2017. Through this strong partnership, we deploy UN Volunteers committed to help countries torn by conflict create the conditions for lasting peace.

UN Volunteers count among the 14,000 civilian personnel who serve global peacekeeping and support UN missions to deliver on their mandates. They play key roles within United Nations peacekeeping operations and special political missions in areas such as information management, monitoring and evaluation, human rights and technical mission support. In 2017, 2,169 UN Volunteers served UN Peacekeeping around the globe.

Peacekeeping helps build national capacities and institutions to become more resilient to conflict, promote development and build long-term peace, inclusivity and stability. UN Volunteers are often deployed in countries and remote regions affected by insecurity and in need of political and community-based reconciliation.

Of the 1,585 UN Volunteers currently deployed in peacekeeping and special political missions around the world, 1,200 are building peace and social cohesion in Africa.

Some 800 UN Volunteers serve in West and Central Africa, and more than 400 UN Volunteers advance peace and development through the United Nations Mission in South Sudan. They are crucial to the success of the mission, volunteering with dedication and performing a range of positions from Communication Officers to Vehicle Technicians. Every day, they go above and beyond in their assignments while enduring hardship conditions.

The United Nations mission in Liberia completed its mandate on March 30 of this year, and UNV and its partners appreciate the legacy of UN Volunteers who served the people and UN Mission of Liberia from 2003-2018.


The work we do is often risky and at times very dangerous, but it is necessary" --Ouedraogo Mohamadi, UN Volunteer Information Analyst with the UN Multidimensional Integrated Stabilization Mission in Mali.

Atsuko Hirakawa knows this first hand from her assignment in Afghanistan in 2009, where she served as a UN Volunteer Public Outreach/Training Coordinator with UNDP. She supported the Independent Electoral Commission through the UNDP project Enhancing Legal and Electoral Capacity for Tomorrow (ELECT).

Atsuko was one of the UN Volunteers evacuated from Kapisa to Kabul shortly before the Bakhtar guest house, which was home to many ELECT colleagues, came under attack by insurgents. Five United Nations personnel lost their lives in the attack, including two UN Volunteers: Yah-Lydia Wonyene (Liberia) and Jossie Esto (Philippines). In her blog entry, service and sacrifice: going back to Afghanistan after the Bakhtar guest house attack, Atsuko shares her memories and the profound effect her multiple volunteering assignments have had on her.

May 29 is dedicated to celebrating all heroes of peace around the world. On this special day, join us in recognizing the service and sacrifice of our dedicated UN Volunteers and personnel.  #PK70 #volunteerism