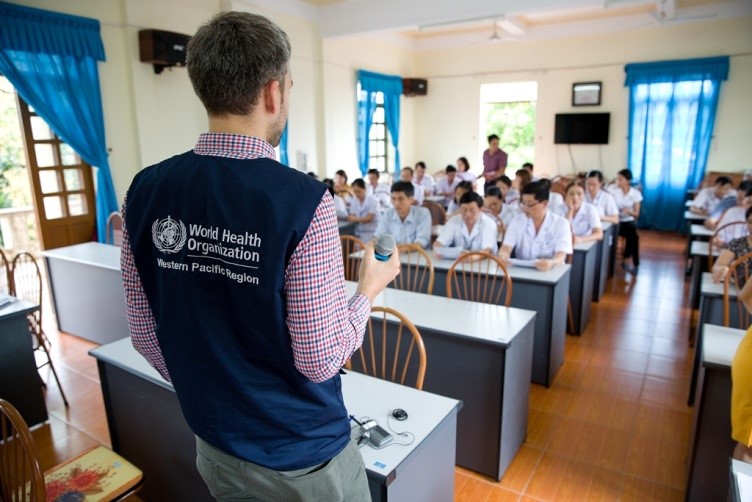 World Health Day is the birthday of the World Health Organization (WHO) and a day that is close to Emmanuel Eraly's heart, as he has been involved in many campaigns to raise awareness of health issues in Viet Nam, where he worked for almost four years as a UNV intern and later as an international UN Volunteer supporting the communications function of WHO.

World Health Day is the birthday of the World Health Organization (WHO) and a day that is close to Emmanuel Eraly's heart, as he has been involved in many campaigns to raise awareness of health issues in Viet Nam, where he worked for almost four years as a UNV intern and later as an international UN Volunteer supporting the communications function of WHO.

In October 2015, Emmanuel, who is fondly called Manu, officially joined the United Nations in Viet Nam as international staff and became Communications Officer at WHO. One of the most memorable moments during his previous assignment as a UN Volunteer was his participation in a nationwide campaign on antimicrobial resistance.

"This campaign focused on promoting a more rational use of antibiotics. As part of the campaign I visited local health facilities to advise doctors to prescribe drugs in a rational manner and for people to only buy prescribed drugs. Although it is not easy to change people's attitudes, we do feel the community is starting to become more and more aware of this issue and willing to only use drugs when really needed," says Emmanuel.

"Viet Nam has made great strides in improving its capacity to deal with public health emergencies such as Ebola or the Middle East respiratory syndrome coronavirus (MERS-Cov). As a Risk Communications Officer I helped the country prepare its communications messages during disease outbreaks," he continues.

Emmanuel believes that the work of WHO does matter in a country like Viet Nam. "Coming from a developed country with universal health coverage and a well-functioning health system, I learned it is really important to have an organization like WHO advancing agendas such as immunization or health insurance in a country with less advanced structures," he says.

"You can live with less money, less travel, but you cannot compromise on your health. And to work for the leading global organization whose aim is to promote the health of the people is a very rewarding feeling," he continues.

This year, the topic selected for World Health Day to promote the health and well-being of people across the globe is diabetes. Emmanuel stresses that diabetes is a chronic disease that can cause blindness, kidney failure, leg amputation and other ailments that lead to premature death. He wants to raise awareness that diabetes is not just a worry for older people.

"Nowadays many young people are shocked to discover that they have diabetes. The good news is that most diabetes can be prevented with cost-effective interventions. The first step to prevention is a healthy lifestyle," he says.

As a former UN Volunteer and currently as a Communications Officer for WHO, he believes in the power of communicating and sharing information. On the occasion of this year's World Health Day, he would like to encourage everyone to raise awareness about the risks of diabetes and share with at least one person this message: "To prevent diabetes, you need to maintain a healthy body weight and get regular medical check-ups. You also need to eat healthily, exercise regularly and avoid smoking and alcohol."