On 29 November, the United Nations Volunteers (UNV) programme in Fiji launched a flagship report, the State of the World's Volunteerism Report (SWVR) 2018, demonstrating that volunteers across Asia and the Pacific region are a fundamental coping strategy for resilient communities. The SWVR 2018 launch in Suva, Fiji was held on the occasion of the UNV Executive Coordinator's official visit to the Pacific.

On this occasion, Ms Shalina Miah presented the key findings of the report which proposes new evidence on the role of volunteerism in strengthening community resilience. It finds that communities value volunteerism because it enables them to create collective strategies for dealing with diverse economic, social and environmental challenges. 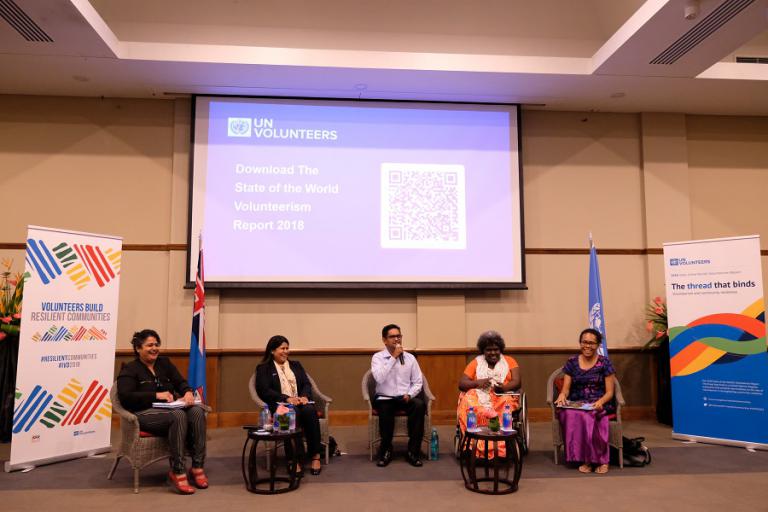 With rising sea levels, population displacements, conflict and inequalities, we live in a turbulent world and resilience is critical to all the post-2015 development frameworks. And if resilient communities are the fabric of resilient societies, volunteers are the threads that binds those communities together. “Olivier Adam, UNV Executive Coordinator.

In Asia and the Pacific, there are nearly 29 million full-time equivalent volunteers. As they are active in every major shock and stress experienced by communities, decision-makers need to better understand the relationship between volunteerism and community resilience so that voluntary action has the best opportunity to contribute to the collective and public good.

One of good examples is the Fiji Volunteer Scheme (FVS) which was established in 2012, along with the first national volunteer framework policy. This Scheme deploys volunteers from Fiji to neighboring Pacific Island Countries to support grass root members of communities, such as in Tuvalu, Papua New Guinea, Vanuatu, Tokelau and the Timor Leste, while addressing employment issues back in Fiji. The areas supported by the volunteers are diverse, including health, education, climate change and environment, forestry, public administration, social security and rural development, etc.

The significance of the SWVR 2018 launch and the high-level panel discussion in Fiji is that the key findings and perspectives of the global research  the importance of volunteerism in community resilience building - was reflected according to pressing issues and priorities in Fiji and the Pacific contexts. It also addressed critical support needed for volunteering and enabling environment creation to enhance potentials of volunteering and positive impacts.

Following the visit to Fiji, the UNV Executive Coordinator and the UNV Regional Manager continued to Samoa. International Volunteer Day (IVD) celebration wias held in Apia on 5 December 2018, with the Government officials, local and international volunteers, volunteer-based organizations as well as development partners and UN agencies.

As part of the global celebration, Mr Olivier Adam also launched the State of the World's Volunteerism Report 2018: The thread that binds on the morning of 5 December at the Faleata Golf Course Fale with the presence of Samoa Government's officials, local and international volunteers, volunteer involving organizations, development partners and United Nations agencies

Volunteers are global citizens motivated to contribute to peace and sustainable development, and they play a critical role in implementing a people-driven, transformative agenda for change. Ultimately, volunteer action weaves a collective social fabric that makes communities more inclusive and resilient. In doing so, local volunteerism is a fundamental resilience strategy for communities everywhere, said Olivier Adam.

In the afternoon of the same day, there was a tree planting event at Mount Vaea to plant 249 native trees required to sequester the greenhouse gases produced by their travel. The UN volunteers in Samoa partnered with the Ministry of Natural Resources and Environment (MNRE) and the Samoa Conservation Society (SCS) to calculate the total amount of carbon emitted from their international flights to volunteer in Samoa. Throughout their lifetimes, the 249 trees will absorb more than 56 tonnes of CO2, making a major contribution to Samoa's efforts to combat climate change.

UN Volunteers have been serving in the Pacific since 1973, supporting government-led development efforts. In Samoa, national and international UN Volunteers work with youth employment programmes, in collaboration with the Chamber of Commerce, to assist young people develop the knowledge and skills needed to secure employment opportunities.

International volunteers have been involved in the establishment of eGovernance and cyber security initiatives to revolutionise government services and make them accessible to the most vulnerable. Other international UN Volunteers work on the Green Climate Fund project, which builds community and infrastructure resilience to increasingly intensifying weather events exacerbated by climate change.