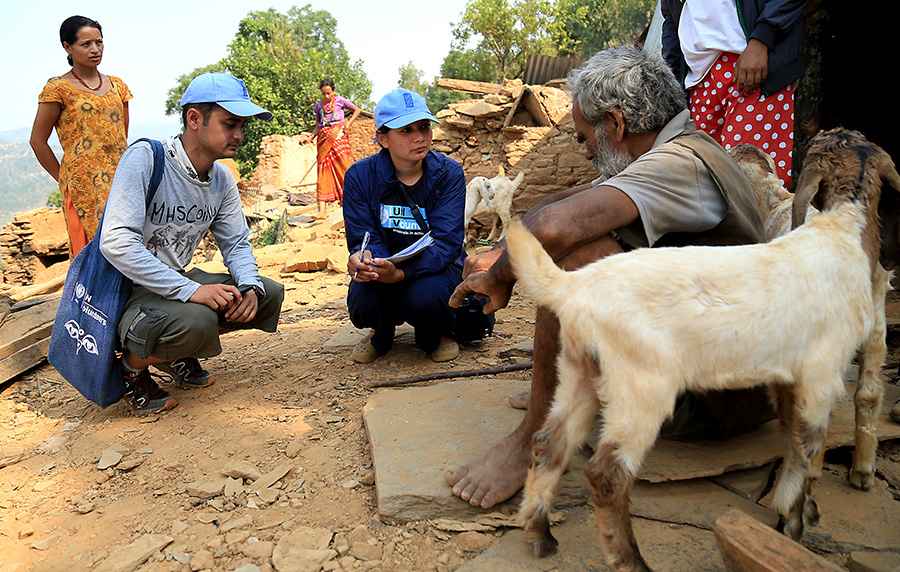 Report found that volunteerism served to strengthen local institutions in the disaster-affected sites, mobilize and develop the capacities of distraught communities, and increase coordination efforts among key players that responded to the earthquake.

The United Nations Volunteers (UNV) programme launched today the report Rebuilding with the Community after a Disaster: Volunteer Engagement in the 2015 Nepal Earthquake. The report examines the role of volunteerism in the earthquake response efforts based on the work of 107 UN Volunteers who served in the disaster-affected sites.

The earthquake, which hit Nepal on 25 April 2015 with multiple aftershocks, brought about widespread destruction across the country and resulted in 8,790 deaths, 22,300 injuries and 755,549 houses that were either damaged or completely destroyed.

In response to the catastrophe, UNV swiftly mobilized and deployed UN Volunteers in partnership with the United Nations Development Programme (UNDP) to deliver important services in the districts of Sindhupalchowk, Kavrepalanchowk, Nuwakot, Chitwan and in Kathmandu. 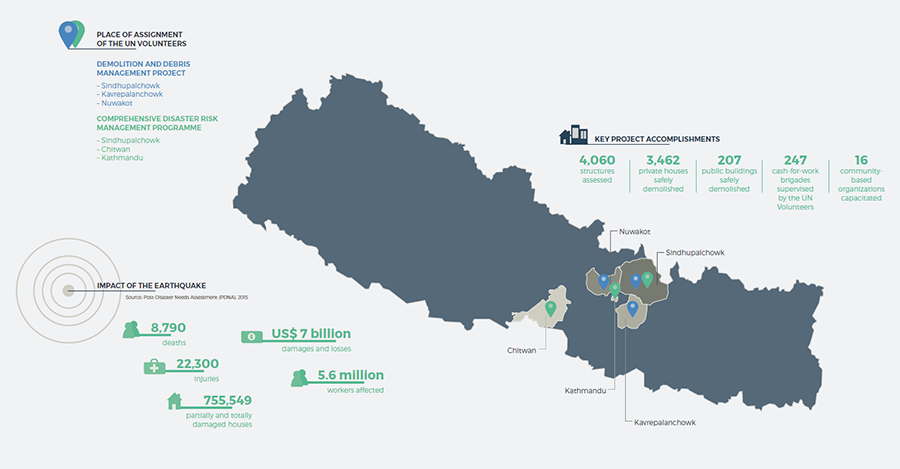 The report draws its findings from focus group discussions involving 280 cash-for-work participants, 76 key informant interviews with stakeholders from the Government of Nepal, UN and partner organizations and interviews with 54 UN Volunteers conducted between April and July 2016.

The report found that volunteerism served to strengthen local institutions in the disaster-affected sites, mobilize and develop the capacities of distraught communities, and increase coordination efforts among key players that responded to the earthquake.

Furthermore, the report posits that through their engagement in response efforts at the community level, UN Volunteers were able to help advance the social inclusion of women, promote volunteerism among local people and decision-makers, and create opportunities for youth participation and capacity development.

According to Richard Dictus, former UNV Executive Coordinator, the support provided by UN Volunteers in the earthquake response “has shown how volunteers can provide vital support to and cooperate with the community in tackling the effects of a tremendous disaster, while transferring skills and knowledge to people from the community in order to help build greater resilience.”

Valerie Julliand, UN Resident Coordinator and UNDP Resident Representative of Nepal, noted that “what we witnessed in the aftermath of the earthquake was the dedicated and selfless efforts of UN Volunteers at a time when their assistance mattered most. UN Volunteers have played and continue to play a vital role in helping ensure that no one is left behind as the country endeavors to build resilience.”

“As Nepal mobilizes itself towards the Sustainable Development Goals, there is no doubt that volunteerism, as demonstrated in aftermath of the earthquake, will continue to play an essential role,” she added.