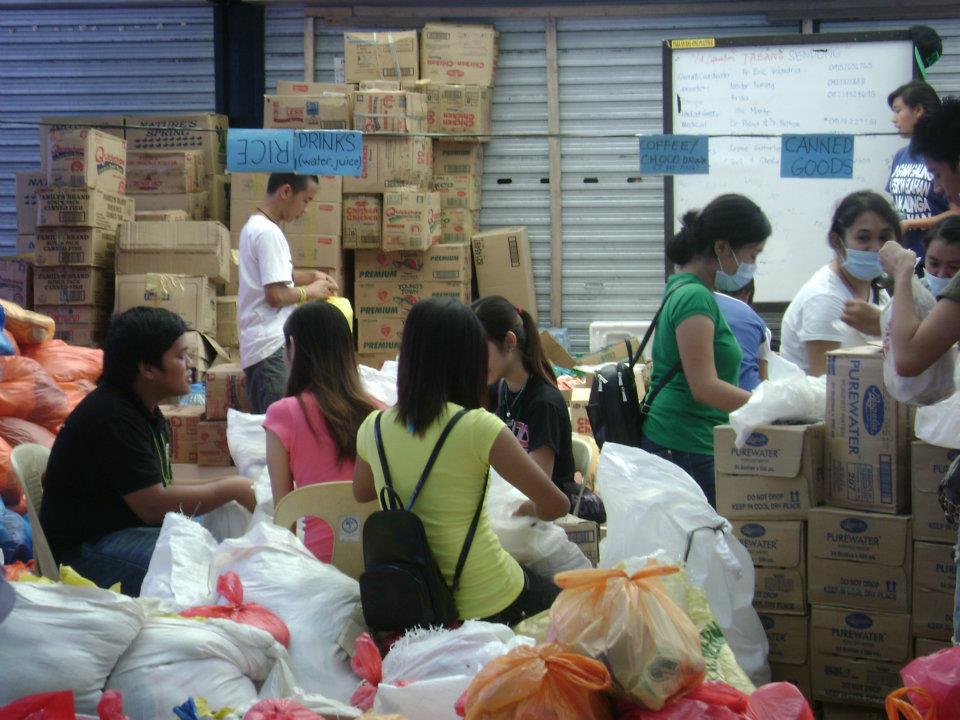 The Philippines has a vibrant local volunteer sector with a long tradition of providing emergency relief and recovery support following a natural disaster. In Cagayan De Oro City, Philippines, students from Xavier University volunteer to collect and distribute donations for the earthquake-hit region. The university’s volunteer groups established the volunteer center to help the underserved communities. (Akiko Abe/UNV, 2011)

UNV is doing a number of things to support response and recovery efforts following Typhoon Haiyan which hit the Philippines on 8 November 2013. UNV is supporting the United Nations Office for the Coordination of Humanitarian Affairs (UNOCHA) in Manila, where two UN Volunteers are now assigned. It is working with UNCT to facilitate the rapid mobilization of UN Volunteers if necessary and UNV's Online Volunteering service posted opportunities for online volunteers to geo-tag thousands of twitter messages and images of the areas affected by the typhoon to map the urgent needs of the population.

Since 8 November 2013, when Category 5 Typhoon Haiyan made a direct hit on 36 provinces of the Philippines, there has been a worldwide response by aid agencies, governments and civil society to help the densely populated nation of 92 million people recover.

The latest Government estimates (at 20 November 2013) indicate that 13.25 million people were affected by Typhoon Haiyan, including over 4.4 million who were displaced.  More than four million people are living outside evacuations, while 387,450 are living in 1,552 centres.

Entities from throughout the UN system and beyond are engaged in responding to the record breaking natural disaster (known locally as Typhoon Yolanda) and assisting the recovery of those affected. Here is a brief update on the actions UNV is undertaking to support the response and recovery.

UNV is supporting the United Nations Office for the Coordination of Humanitarian Affairs (UNOCHA) in Manila, where two UN Volunteers are now assigned.

Joe Tabago, from Canada, a UNV Humanitarian Affairs Analyst, has been working around the clock with UNOCHA colleagues in Manila.

"The humanitarian situation in areas affected by the Typhoon is catastrophic," Joe says. "The ISAC (Inter-Agency Standing Committee on Humanitarian Affairs) has declared a system-wide Level 3 Emergency, the same as for Syria.  It's as high as you can get."

Since leaving his duty station with UNOCHA in Cotabato City, the UN Volunteer has found himself assigned duties which carry a great deal of responsibility. "I am one of the points of contact for the OCHA Field Unit in Manila. Together with the reporting and humanitarian financing team, we have been issuing situation reports since the onset of the emergency, and together with humanitarian partners developed the Haiyan Action Plan which seeks over $300 million to provide life-saving assistance to the affected communities."

He will be joined shortly by UN Volunteer Andrew Farquhar, from Australia, a UNV Reporting Officer with UNOCHA Jakarta, who will take up a three-month temporary detail mission in the Philippines.

Taking into account the urgency, UNV has set up a special recruitment task force at its headquarters in Bonn, Germany to ensure highest priority is given to all demands required for the response. The task force is comprised of colleagues from amongst UNV's Volunteer Recruitment Resources Section.

As with the debris removal candidate identification above, the special recruitment team is on standby to assist the entire UN Country Team. UNV has a ready roster of candidates. In addition, many who are already on the roster and many new applicants are writing to UNV daily to express their interest to help in the long recovery efforts ahead.

UNV is also working with UN counterparts within the context of the UN's Strategic Response Plan and consolidated appeal process. The objective of the appeal process helps to achieve a common strategic approach among the many UN and other aid agencies on the ground, so they can operate independently but coordinate their efforts. This helps them avoid gaps and duplication, focus on urgent needs, strategically address the crisis and work towards longer-term recovery.

UNV's contribution to this process and plan provides for both mobilization of international and national technical assistance through its UN Volunteers, as well as programmatic recovery support in the form of partnering with the very strong and vibrant local volunteer sector one finds at the community level throughout the Philippines.

Lastly, UNV's Online Volunteering service supported UNOCHA by posting its volunteering opportunity for online volunteers to geo-tag thousands of twitter messages and images of the areas affected by the typhoon to map the urgent needs of the population.