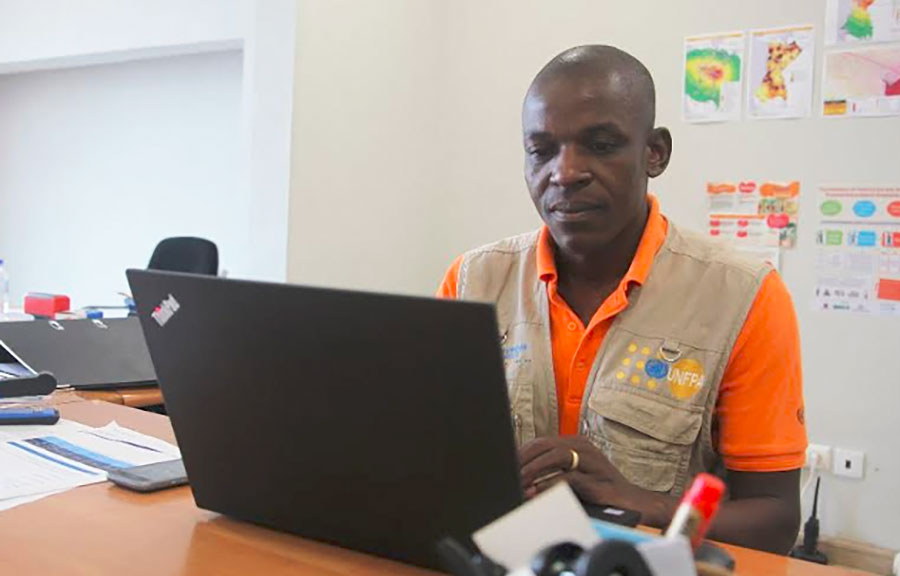 On 14 March 2019, tropical Cyclone Idai hit the port of Beira, Mozambique, before moving across the region. Millions of people in Malawi, Mozambique and Zimbabwe were affected by what is the worst natural disaster to hit Southern Africa in at last two decades. As a national of Mozambique who was directly affected by the cyclone, Matecue Tendai, a national UN Volunteer with the United Nations Population Fund (UNFPA) in Mozambique, shares his personal experience during this natural disaster.

The day the cyclone hit, we accommodated five neighbour families who sought refuge after the cyclone winds destroyed their houses. A total of 33 people sat in our small sitting room and I had to climb up the roof to place stone blocks to prevent the roof of being swept away.

The neighbours helped me pile the blocks in the sitting room and tied strong ropes to the roof to prevent the entire roof from being lifted. We shared everything we had with all the people in our house. The piles of blocks only held for a moment, then the roofing sheets of the garage, bedrooms and the kitchen were removed by harsh winds. We all remained in the sitting room without any means of escaping.

On the following day, the impact was so severe that we couldn’t host the families anymore. All our resources were extremely constrained, my wife was expecting, and the situation was unrelenting. Six weeks later, Cyclone Kenneth hit northern Mozambique – this was the first time in recorded history that two strong tropical cyclones hit the country in the same season.

Faced with an impossible situation, I responded to a special recruitment call by UN Volunteers (UNV) programme and joined the UNV family to apply my knowledge and expertise to the emergency operations. I was driven by the dire need to find alternative ways I could help my family and community.

I joined the UNFPA as a national UN Volunteer amongst the organization's emergency response personnel. UNFPA was participating in a joint UN response, co-chairing the health cluster coordination and leading the protection cluster. UNFPA also worked to secure access to sexual reproductive health (SRH) services and prevent and response to gender-based violence in the wake of the disaster.

The numbers of people who needed assistance were staggering. Sofala province was hit the hardest with some 660,000 people affected, and roads cut. Due to high winds and floods, the central hospital in Beira was damaged and sub-provincial level health facilities severely damaged and dysfunctional.

Scenes from the flooding in Mozambique in the wake of the cyclone. (UNFPA, 2019)

It was a fast-track learning channel that opened my professional life to multiple tasks in administration, petty cash control, procurement and logistics under emergency situations.

It was difficult working under extreme pressure; professionally I gained a more proactive mind-set, quickly learning the art of prioritization of urgent versus important tasks. I had the opportunity to apply what I learned in the United Nations security courses and security briefings, as most of the areas were without proper roads, without electricity, with insecure building structures and poor communication networks.

As someone coming from the private sector, it wasn´t easy learning humanitarian emergency operations in the wake of such an extensive tragedy. I had to learn fast and act at the same time. Mistakes and errors were common, but procedures and policies were to be followed, as instructed by my supervisors.

I shared whatever I learnt from work with family and communities whenever I returned home. Being at the forefront of an emergency, I had to garner strength to comfort and empower the affected families and communities.

As a UN Volunteer, I helped with administrative activities and logistics assistance for emergency operations that provide life-saving health services.

I also worked alongside colleagues at UNFPA, packing and distributing emergency response kits and dignity kits to the most vulnerable women and girls for gender-based violence case management, psychosocial services and community awareness on prevention.

The emergency response was a steep learning curve for me, but extremely worthwhile. The recovery phase is in process, but even now it is a challenge to re-build what was destroyed. I, however, remain forever grateful to have contributed to alleviating the pain of so many people in the wake of one of the worst disasters to have hit my country.