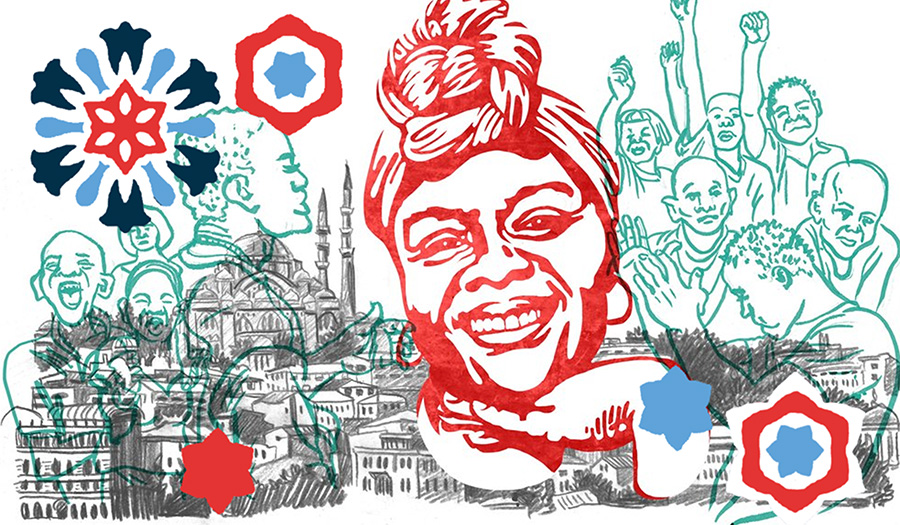 UN Volunteer with UNHCR, Ann Kamunya ,speaks up for people of concern and against injustice; an illustration by Bureau Verstak.
UNV, 2019

This story is part of the #Volunteers4Refugees campaign, launched by UNV in partnership with UNHCR on World Refugee Day 2019. The campaign features stories of six UN Volunteers working with UNHCR in the Arab States, Europe and CIS for one mission: to help save lives and build better futures for those forced from home.

Growing up, Ann Kamunya witnessed first-hand egregious violations of human rights — in particular, against women. This completely changed her perspective of and outlook on life, and what she wanted to do with hers.

"I went to school with so many girls who were forced into arranged marriages at a very young age or had to go through genital mutilation," she says. "Witnessing these injustices and being surrounded by people who couldn’t speak up for themselves, I always knew I wanted to be a lawyer and represent the marginalized and the least privileged people."

Born in a small town in Samburu, a county in north-central Kenya, populated with marginalized community of Samburu people, Ann witnessed a lot of injustice, which affected her decision to become an advocate.

Ann, 33, previously served with UNHCR as a national UN Volunteer in Nairobi and later in Kakuma Refugee Camp in Kenya, helping refugees and asylum seekers, including those forcibly displaced due to the war in South Sudan and persecution on the basis of sexual orientation in Uganda. Today, she serves as a UN Volunteer with UNHCR in Ankara, Turkey, where she has been posted for more than two years.

An interesting fact about Turkey is that the country currently hosts the largest number of refugees in the world with more than four million people in need of international protection.

In Turkey, in her role as Associate Refugee Status Determination Officer, Ann interviewed asylum seekers from Iraq, Afghanistan, Iran, Somalia and other countries, assessing applicants' cases and making a determination on whether a person seeking international protection is considered a refugee under international law as per the office’s standard operating procedures.

Helping refugees determine their status is a critical part of the process; asylum seekers whose status is yet to be determined tend to live in limbo as there is uncertainty about the future. The way it works is that once a person is deemed a refugee, he/she is entitled to assistance, as needed, and support in identifying a durable solution.

While resettlement is not a right, it is one of the durable solutions that UNHCR continuously advocates for as a form of burden sharing with the international community and facilitates on behalf of the individual depending on the existing resettlement quota and the needs.

It is however, every person’s right not to be forcibly returned to their country of origin according to different international human rights and humanitarian legal instruments — UNHCR places the protection from refoulment at the forefront of their interventions for persons of concern.

The gravity of making these types of determinations — that, quite literally, change the trajectory of lives that are hanging in the balance — is not lost on Ann. Added to the complexity of the situation is the fact that many of these individuals have been through their own personal trauma, and it’s only fair their cases are handled delicately and with care.

"Conducting interviews with refugees is never easy — sometimes you meet people who have suffered from horrible and traumatic experiences like sexual assault or physical abuse," Ann shares. "I always try to stay professional, but at the end of the day you’re still a human being, so I always have to be aware of my own wellbeing to avoid burnout." -- Ann Kamunya, UN Volunteer with UNHCR, Turkey

This job is not for the faint of heart; it requires dedication, skill and most of all empathy when dealing with the most vulnerable among us. This is exactly what the team at UNHCR Turkey does.

The toll that traumatic experiences can have on refugees is sometimes not just psychological. Some bear the physical scars that serve as a painful reminder of what they’ve been through.

"Once I interviewed a woman who survived being set on fire by her own husband, a widespread case of domestic violence against women in Afghanistan," Ann says. Despite what the woman has been subjected to, Ann noticed her silent strength even as she narrated the story of the past. "The key is not to let it define you, but to push past the pain to see the light at the end of the tunnel and walk toward it."

"Seeing how resilient these people are and being able to listen to them and ease their pain gives me motivation to stay strong as well."

*As of September 2018, UNHCR has phased out conducting registration and refugee status determination activities for refugees seeking international protection, as per the agreement between UNHCR and the Government of Turkey. Ann is now focusing on interviewing separated and unaccompanied children in Turkey, helping to provide care for those who have been separated from their families and as such cannot be protected by them.