Women in peacekeeping, a powerful asset for peace and security in West and Central Africa

In the Western and Central African region alone, more than 750 UN Volunteers support the mandates of three major peacekeeping operations in Mali, DRC, and the Central African Republic, out of seven on the African continent. They work as part of the civilian component of missions, in the fields of protection, conflict prevention, rule of law and national capacity development. Almost 37 per cent of these volunteers are women delivering contributions that are key to peace.

Whether with the UN Multidimensional Integrated Stabilization Missions in Mali (MINUSMA), the Central African Republic (MINUSCA), or the Democratic Republic of Congo (MONUSO), female UN Volunteers address the root causes of conflicts and evolving security challenges that impact the people.

To carry out their duties, they support peacekeeping operations in restoring justice and fighting impunity, promoting human rights, and supporting local and national political institutions. They are also assigned to technical domains, as IT assistants, logisticians, nurses and air operations assistants, supporting the smooth operations of these missions..

These committed women come from all over the world and represent 79 different countries, from Fiji to Canada, Mexico to Sweden, and Haiti to Pakistan. They share a common goal: to restore peace, protect people's lives and support sustainable governance, human rights and rule of law.

Claire supports the fight against impunity concerning crimes destabilizing the national peace process, mainly terrorism and transnational organized criminality. She is particularly proud of her work promoting access to justice in the county of Ansongo, 90 km southeast of Gao, on the Niger river. In Ansongo, she works closely with the local judicial authorities, ensuring that court hearings are held regularly.

Claire operates in a particularly challenging security situation that affects the region of Gao in Central Mali. However, she considers herself lucky to work with people from all around the world, discovering a new culture. She also particularly values feeling that her work directly contributes to peace and access to justice in Mali. 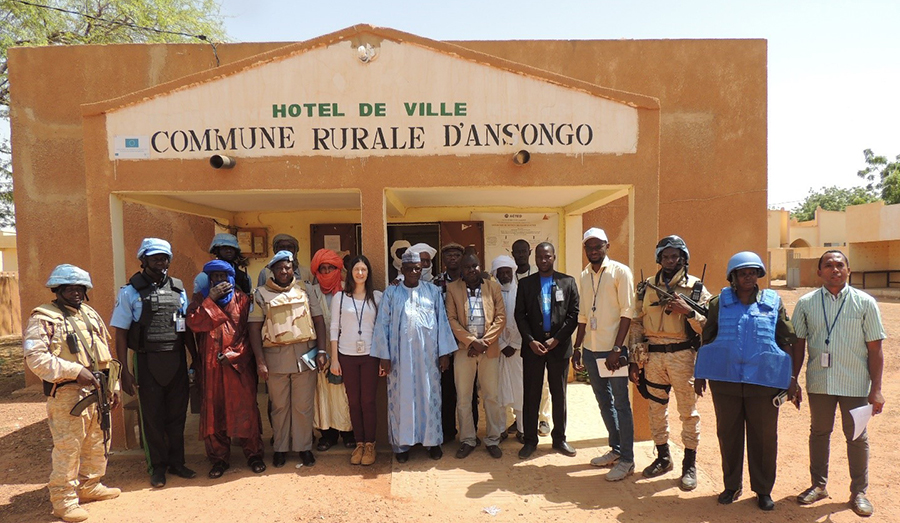 Volunteer colleagues are playing an important role, which is known and recognized. For example, our Gao office was created by two UN Volunteers, who were the first ones assigned at the start of the mission in 2014. --Issa Thioune, Team leader of the Justice and Corrections Section’s regional office with MINUSMA.

In the COVID-19 context, some women volunteers are fully engaged in the provision of health services. In Bamako, Vestine Murebwayire, a UN Volunteer Nurse from Rwanda works in a UN walk-in clinic. She provides medical care to MINUSMA personnel while making sure that information relative to the pandemic is in line with MINUSMA’s specific working environment and occupational health issues. During the month of April alone, Vestine assisted 24 international and 14 local staff, providing first aid and emergency medical support, and monitoring treatment to ensure high quality health services.

Florencia's role is to monitor and report on the human rights situation – and violations if applicable. She organizes capacity-development activities and provides national working groups with human rights expertise.  She also supports transitional justice through the capacity development of national human rights institutions.

Since the beginning of her UNV assignment with MINUSCA five months ago, Florencia has organized human rights awareness workshops for national legal staff from the localities of Boda, Bogangolo, and Yaloke. Engaging more than 50 attendees per session, she led a human rights awareness campaign for people with disabilities and organized an awareness session for 100 women during the 2020 International Women's Day.

Becoming a UN Volunteer is a very rewarding and extremely positive opportunity that allows us to be actively engaged in supporting a project and a community, acquiring a unique perspective on the world, and contributing meaningfully to society. --Florencia Gavagna, UN Volunteer Human Rights Officer, MINUSCA

Meanwhile, in Obo, in the Eastern, Etsuko Yamada (Japan) is a UN Volunteer Political Affairs Officer who has been supporting the implementation of the Political Agreement for Peace and Reconciliation since September 2018. Etsuko facilitates dialogue between local authorities and armed groups. She also raises the awareness of political leaders on the importance of engaging women in political dialogue.

All these mechanisms aim to forge the peace process at a local level. Hence, Etsuko has supported 33 political dialogue meetings between local authorities and armed groups. She also gathered peace and security forces, community leaders, youth, religious representatives, refugees, and displaced persons to raise awareness of the peace process in the region. A total of 860 people participated, approximately half of these young female participants.

DEMOCRATIC REPUBLIC OF CONGO (DRC) – To help peacekeepers reach remote areas of the country and fulfill the mandate of MONUSCO, UN Volunteers also play an important role directly on airport tarmacs. This is the case for Aya Alice Kouakou, from Côte d’Ivoire, who has served as a UN Volunteer Air Operation Assistant in the city of Bukavu since July 2017.

Aya Alice provides UN flight logistical assistance to peacekeepers to ensure their timely deployment to conflict zones with UN flights. She also coordinates medical evacuations, and the delivery of fuel and food rations. Beyond this, Aya Alice supports MONUSCO’s Corrections Unit in organizing awareness-raising activities on the Ebola virus for women and children in prisons. To date, she has assisted 53 women and children in adopting preventive measures against Ebola.

More than 110,000 UN Peacekeepers are currently deployed in 13 operations, including 1,538 UN Volunteers. In West and Central Africa, more than 270 women are assigned to MONUSCO, MINUSCA, and MINUSMA. Whether they provide substantive or technical support to peacekeepers, women UN Volunteers are essential for peace and political and social stability in the region, today more than ever.