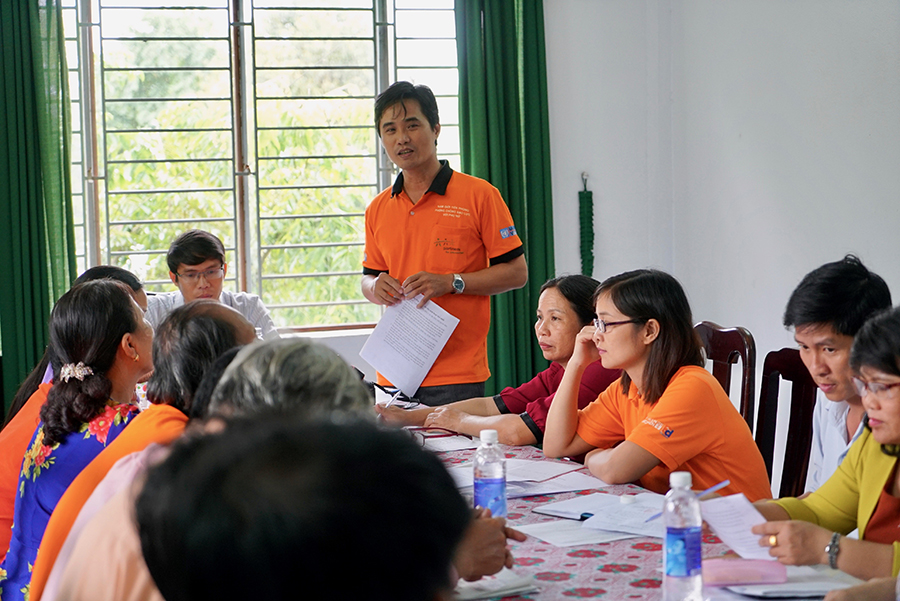 P4P is a UNDP, UNFPA, UN Women and UNV regional joint programme that empowers men to volunteer in their communities and help prevent violence against women and girls in Asia and the Pacific. Here, participants discuss at a workshop in Viet Nam.
(UNV, 2016)

Worldwide, one in three women experience intimate partner violence in their lives. In Asia and the Pacific, 15 to 68 per cent of women suffer physical or sexual violence in their lifetimes at the hands of a partner. That is why not only women and girls but also men and boys, as well as their peers and family, must be involved in approaches to prevent this violence.

Partners for Prevention (P4P) is a UNDP, UNFPA, UN Women and UNV regional joint programme for the prevention of violence against women and girls in Asia and the Pacific.  After 10 years of operation, the project came to a close in March of this year.  A final report on the programme assessed the role volunteerism played in the primary prevention of such violence. Bearing the title 'Lessons Learned about Volunteerism within the Context of Primary Prevention of Violence Against Women and Girls', the report reviews the P4P activities carried out by UN Volunteers assigned in Bangladesh, Cambodia, Indonesia, Papua New Guinea and Viet Nam.

The UN Volunteers worked at the community level with local volunteers, local governments, UN agencies, and civil society organizations to help women, men, girls and boys to develop the skills they need to change people’s attitudes and actions that accept or perpetuate violence against women and girls. They took the lead in planning and organizing interactive workshops, role plays and training sessions to encourage participants to reflect their perceptions about gender equality and think through what they can do to build healthier relationships with at their homes, workplaces, and communities.

Through continuous feedback collected from community and UN Volunteers, it was evident that volunteerism fostered skills development was personally valuable and resulted in general enthusiasm among the volunteers to make a long-term commitment to volunteerism in the community. --P4P report on the impact volunteerism made personally on volunteers

The report also analyzes the impact volunteerism made on the community and provides key lessons learned and recommendations. For example, the interactions of UN Volunteers in different countries functioned as South-South lesson exchanges and created a supportive, empathetic network. The network gave volunteers a sense of belonging. Furthermore, the report notes such network could be valuable in sustaining and growing the prevention programming within the regional context.

This ten-year programme came to an end in March 2018. However, Ms Michiyo Yamada, P4P Programme Manager, commented, "Although the programme is ending, positive results and capacities will be sustained through regional and national partners and volunteers in the community."

We hope that the lessons learned will be applied in the region - and beyond - to replicate and scale up primary prevention to change social norms to ensure women and girls can live free from violence and that, for men and boys, embracing and practicing the precepts of non-violence and gender equality become the most common and accepted forms of masculinity. --Ms Michiyo Yamada, P4P Programme Manager

The report was published at the P4P closing workshop held in March 2018, where UN Volunteers and local volunteers from Bangladesh, Cambodia, Indonesia, and Viet Nam joined to share their experiences with partners.