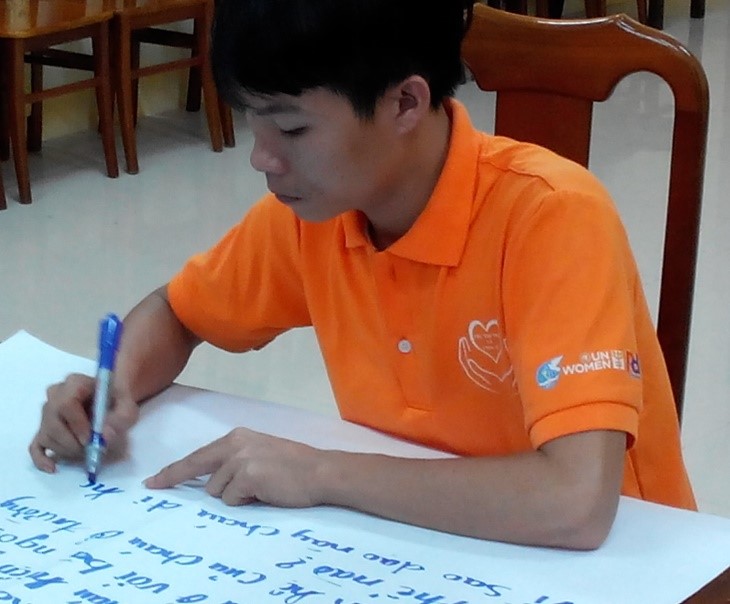 Tran Van Chuong is one of the male advocates working to prevent violence against women and girls in Viet Nam through the Partners for Prevention, a UN joint programme. (Photo: UNV Viet Nam FU and UN Women Viet Nam, 2016)

Through the Male Advocacy Club set up by the Women's Union in Da Nang, Viet Nam, as part of the Partners for Prevention (P4P) UN joint programme, 26-year old Tran Van Chuong found a way to help his neighbour stop beating his wife and learned how to convey his own feelings without insulting or hurting those he spoke to.

26-year old Tran Van Chuong frequently awoke to the telltale sounds of his neighbour's wife being beaten by her husband. Their arguments would start quietly but escalate quickly as his neighbour turned to physical brutality, leaving his wife bruised and scraped. This was not an uncommon problem in their urban community in Da Nang, a major central Viet Nam port city of one million people.

Tran was concerned about his neighbour's violence but also conflicted. In his community it is considered disrespectful for a younger man to speak out and stand up to an older man. But in the end he found a way to help his neighbours through the Male Advocacy Club that was set up by the city's Women's Union in partnership with the Partners for Prevention (P4P) joint programme.

National UN Volunteer Phan Thanh An helped set up the male advocacy clubs, which are hosted by UN Women, and coordinates this community based volunteer component across two districts of the city. Another national UN Volunteer trained as a facilitator and leads discussions to encourage participants to consider gender role stereotypes.

P4P is a UNDP, UNFPA, UN Women and UNV regional joint programme that empowers men to volunteer in their communities and help prevent violence against women and girls in Asia and the Pacific. The joint programme brings together the combined strengths of the four UN agencies, along with governments and civil society to promote and implement more effective violence prevention programmes and policies.

The programme supports one of the UN's Sustainable Development Goals for the year 2030 —gender equality— a key component of which is the elimination of violence against women and girls. Six months into its second Phase, which is focused on violence prevention interventions, capacity development and policy advocacy, initial reports show promise of changing gender norms and prevention of violence.

Violence as a disciplinary tool

In Viet Nam, violence is accepted as a disciplinary tool for men to establish their authority over the women in their lives —as long as it occurs in the privacy of the home, according to qualitative research supported by UNFPA and the P4P joint programme.

In fact, more than half of women in Viet Nam report experiencing violence at some point in their lifetime, according to the Government and the United Nations' National Study on Domestic Violence Against Women in Viet Nam. This violence is shown to have serious physical and mental health consequences, with abused women up to three times more likely to contemplate suicide.

Tran raised his concerns with his fellow Male Advocacy Club members. "I learned that I have a responsibility to help build a peaceful community intolerant of violence against women and girls, and the process starts with educating those around me," he says.

Tran provided temporary refuge for his neighbour's wife while she got support from local police and a community based counseling team. Meanwhile, men from the counseling team, some of whom are also older club members, approached Tran's abusive neighbour. They discussed attitudes regarding gender equality, healthy relationship skills, the perils of using violence against his wife, and legal repercussions. As a result, Tran reports a somewhat improved relationship between his neighbours, who live together again.

Using the combined power of different generations to prevent violence against women and girls, the Male Advocacy Programme invites younger and older men who show an interest in violence prevention to join a nearby club. Together, 120 men aged 18-60 in Da Nang City work to transform deep-rooted community values accepting gender inequitable attitudes and harmful masculinities —beliefs and behaviors that increase women and girls' risk of violence.

"I used to be hot-tempered," Tran confesses, "but now I've changed completely. The club taught me effective communication skills, how to exercise restraint, and how to convey my feelings without insulting or hurting those I'm speaking to."

About Partners for Prevention

Partners for Prevention is a United Nations Development Programme, UN Population Fund, UN Women and UN Volunteers regional joint programme focusing on engaging men for gender equality and transforming harmful masculinities for the prevention of violence against women and girls in Asia and the Pacific.

P4P is generously supported by the Australian Government.