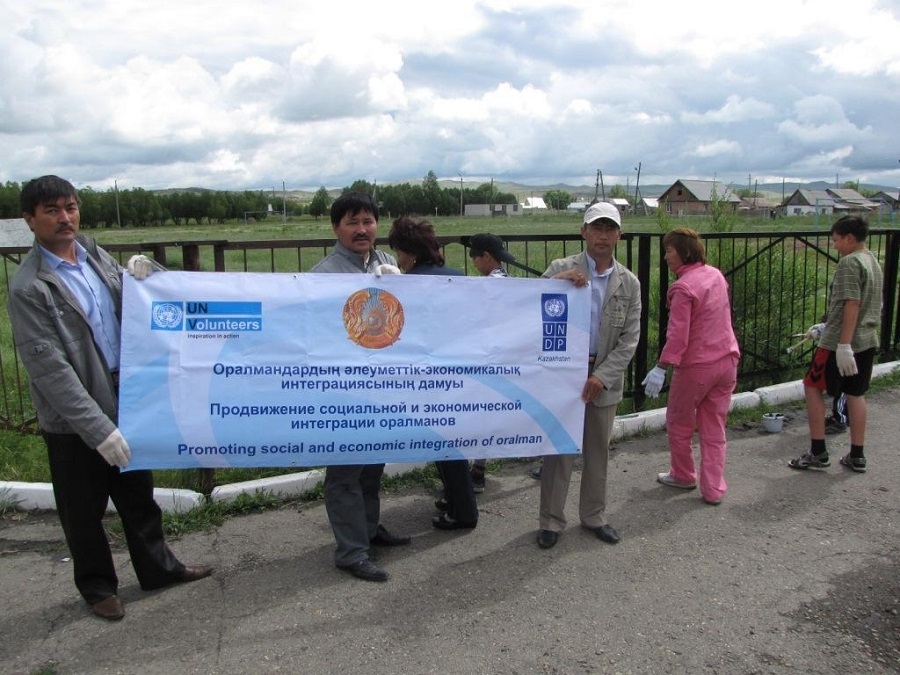 Through a state programme, the Government of Kazakhstan encouraged the repatriation of ethnic Kazakhs. A former repatriate himself, UN Volunteer Nurbakhit Atan (left) advised more than 500 repatriates and conducted joint volunteer actions in the Ulan district. (UNV, 2011)

Адам – The people. The real wealth of Kazakhstan creating a culture of selfless giving, of volunteerism!

Что является богатством нации? Ее люди (in Russian). What is the richness of a nation? – Its people.

It couldn’t be truer for the Republic of Kazakhstan where this saying resonates loud and clear.

People the world over volunteer to give back to society. The one billion and counting volunteers work to commit their time and skills to making people’s lives better.

Kazakhstan has evolved into a vibrant society since its independence almost three decades ago. Volunteerism is increasingly taking front stage – with people more aware and interested in pitching in for social and community work. And there is huge potential of coordinating volunteerism for development in Kazakhstan.

Volunteerism is not new to Kazakh society. United Nations Volunteers and Kazakhstan have partnered since 1993 to make sustainable development a reality.

In 2016, UNV had almost seven thousand volunteers around the world on the ground and almost 13 thousand online volunteers serving with UN agencies, governments, private sector and civil society. UN Volunteers often work directly with vulnerable groups at the grassroots level.

There are 22 Kazakh UN Volunteers serving in Kazakhstan and around the world in peace and development initiatives. From capacity building to gender equality, from advocacy of sustainable cities to climate action, UN Volunteers work along with local communities.

Kazakh UN Volunteers are working in Kyzylorda region to implement sustainable waste management and reduce inequalities for persons with disabilities. And they also create awareness of low carbon consumption and reduction of emissions especially among the youth in the southern town of Taraz and in 12 more regions of the country.

Acutely aware of the local surge in volunteering, UNV commends the Government’s initiative to mainstream volunteerism through a regulated Law on Volunteering Activity. The new law signed in December 2016 allows further opportunities for academia to involve youth in high profile events.

At the Expo 2017 – Future Energy in June there will be a large-scale mobilization of some three thousand volunteers. UN Volunteers will provide expertise in coordinating the university volunteers.

United Nations Volunteers applauds the many women and men of Kazakhstan.

Адам (in Kazakh) – The people. The real wealth of Kazakhstan creating a culture of selfless giving, of volunteerism!

This opinion editorial was originally published in The Astana Times.