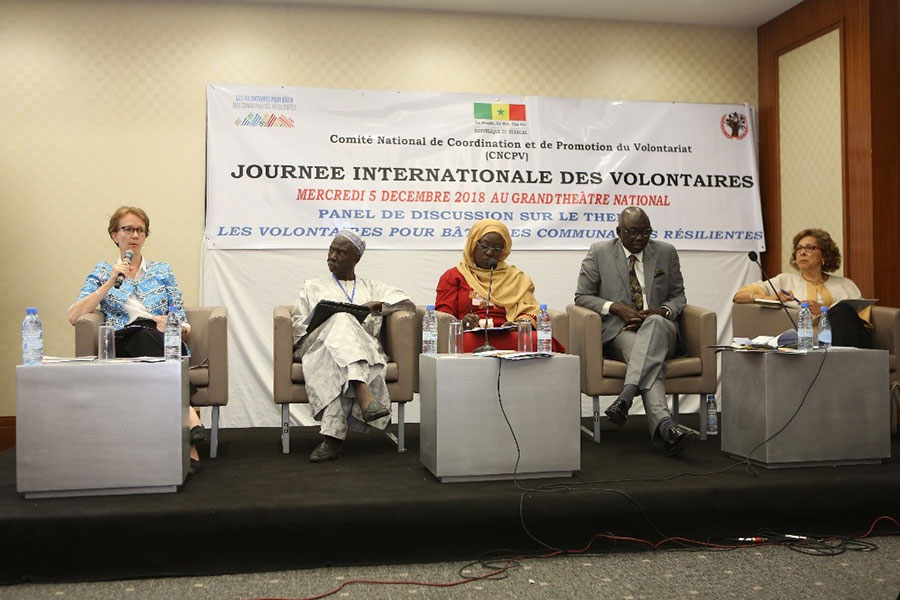 The celebration of International Volunteer Day (IVD) in Senegal was an opportunity for the United Nations Volunteers (UNV) programme to formally launch the State of World Volunteerism Report, a triennial publication that measures the contributions of volunteerism for peace, security and development. The 2018 Report, The thread that binds,  highlights the crucial role of volunteerism as a driver of positive change in communities.

Prior to the official launch of the State of the world's Volunteerism Report 2018, the UNV regional office for West and Central Africa conducted a media campaign to share the observations and results of the SWVR Report 2018 and talk about the celebration of the IVD with the populations in Senegal and West and Central Africa. The UNV programme was invited to talk about both events in the BBC, West Africa Democracy Radio (WADR), Radio China International and two national radio stations (I-Radio and Trade Point FM)

After the official launch of the SWVR Report on 5 December, Paul Armand Menye, programme specialist / volunteer advisory services at UNV regional office in Dakar shared the results of the Report, with strong evidences on the high contributions and impacts of volunteerism within communities.

"According to the document, there are 109 million volunteers in the world, including 7.1 million in sub-Saharan Africa. 30 per cent of volunteering initiatives are done in an official way, through organizations, associations and groups. The majority of volunteers (70 per cent) belong to the community volunteerism system. Overall, the report indicates that women do more volunteer work than men (57 versus 43 per cent)," he stated.

Priya Gajraj, the Resident Coordinator of the United Nations System in Senegal also reviewed the key points from the Report.

The importance of volunteerism for resilience and the agenda of the 2030 Agenda are pathways to follow. The UN system is committed to supporting volunteerism in Senegal.

The Deputy Secretary General to the Presidency of the Senegalese Republic expressed the commitment of the Government to continue to promote volunteerism and to develop an analysis of the national situation of volunteerism. He further reaffirmed the importance of the recommendations of the World Report and will ensure that they are integrated into national public policies.

In close collaboration with the Comité National de Coordination et de Promotion du Volontariat (CNCPV) au Sénégal, the International Volunteer Day (IVD) in Senegal was celebrated on Wednesday, December 05, 2018 at Grand Théâtre in Dakar. The theme of the IVD this year was based on the results of the World Report: Volunteers Build Resilient Communities.

The activities began on 26 November with the launch of a Facebook challenge on the UNV regional West and Central Africa facebook page. Organizations and Volunteers were invited to participate in the online discussion panel by commenting and 'liking' the post provided for this purpose. The organization or volunteer who had the most of 'likes' would win the game. The Agence pour la Sécurité de Proximité (ASP) won the prize. The panel's facebook live recorded 17,000 views.

On 5 December, the IVD 2018 official ceremony was presided and launched with the presence of High authorities. US Embassy Representative, who is also Peace Corps (Volunteer Organization) Executive Director, in her speech, emphasized the contribution of volunteering to resilience, particularly through the participation of young people and women.

The representative of the Japanese Embassy, for her part, shared some interesting ideas on the future of volunteering in Senegal. JICA has more than 1,000 volunteers in Senegal.

After the official conference the authorities proceeded to the opening of the exhibition which was attended by local (ASP, EDEN, YMCA, Volunteers of the City, Corps Africa, CV3A, APECSY, Civic Service) and international volunteering organizations (JICA, KOICA, Peace Corps, France Volontaires, PVNU).

A blood donation, initiated by the ‘Association Nationale des Donneurs Bénévoles de Sang’ (ANDOBES), was timely on this day to demonstrate the solidarity and commitment of volunteers to help communities.

The event continued with the highlights of the panel discussion that brought together key figures of resilience at the national and regional levels.UNV office in Dakar invited the 3 young ladies from the music group Safary Queens to close the IVD activities in Dakar with an artistic and musical performance. The singers, who are famous local stars, played songs and conveyed messages dedicated to volunteers and women. They encouraged the public to continue volunteering for their community. The Safary Queens closed the day to the applause of the audience of French, Japanese, Korean, Swiss, Mauritanian, American, Senegalese volunteers ... proud of all the work done through towns and villages of Senegal.