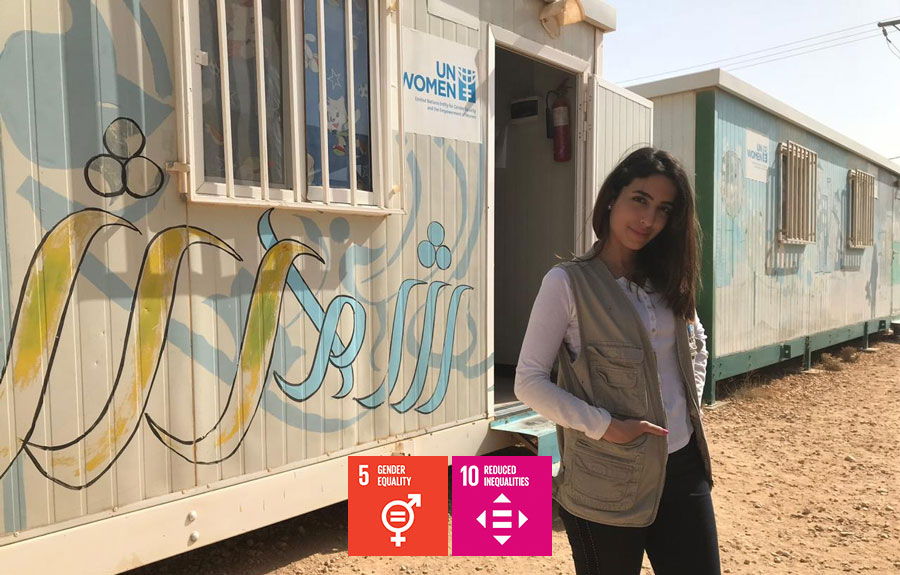 No limits for women's rights: the ambitious goal of a volunteer with UN Women in Jordan

During her experience as a national UN Volunteer with UN Women for almost a year, Natalie Nustas has seen firsthand the countless challenges faced by women in both the private and public sphere. She’s also seen the life-changing impact of empowering women to have a voice, opportunities for work, and hope.

Having been raised in a socially conservative environment, Natalie explains that she was one of the lucky ones. Empowered to pursue her education, she obtained a Master’s degree in Media and Development from the United Kingdom.

Perhaps this is why joining UN Women as a volunteer after she settled in Jordan seemed like a natural move. Though she acknowledges that gender inequality is a worldwide issue, she says, "It’s hard to be a woman from the Middle East and not be affected by the issues around women’s rights."

In fact, in the Gender Gap Report 2018, which measures the gaps between the access of men and women to work, education, health and political and economic participation, the scores of the Arab States were well below the global average.

Natalie, 25, is particularly concerned for the rights of Syrian women living in refugee camps. Since the beginning of the Syria crisis in 2011, Jordan has hosted around 670,000 refugees (according to the latest UNHCR figures) of whom around 17 per cent live in the refugee camps of Za‛atari and Azraq.

"In the camps, opportunities for women are limited and many are still healing from losing family members due to the conflict in Syria, while being still at risk of gender-based violence."  This is something that Natalie has experienced in her own life. She shares:


I grew up around women afraid to express themselves because the society taught them not to. I was one of them. There were so many boundaries and taboos that we had to uphold, without ever knowing why. --Natalie Nustas, UN Volunteer with UN Women in Jordan

As a UN Volunteer, Natalie has been visiting the camps regularly, supporting UN Women’s interventions there, working on gender equality and women’s empowerment.

According to a UN Women report published in 2018, Syrian refugee women living in camp settings are confronted with several challenges, including gender-based violence. Realizing this, Natalie explains, "[UN Women] operates four resilience and empowerment centres for women and girls in the camp, providing opportunities for refugees to learn skills such as mosaic art and drawing, or to become a tailor or beautician, providing opportunities not only for work, but to enable women to feel that they have a purpose in life.

After her experience at UN Women, Natalie is able to place her personal experiences in the context of the global trends; she is conscious that, across the world, gender equality is still a long way off.

In our societies, we’re told women should be educated… but only to a certain level. Women should speak… but not too much, as it would reflect negatively on their image. Women are taught to only aspire to marriage, as is should be the most important ambition to base life choices upon. --Natalie Nustas

However, she remains determined to speak out, and support others to do so, too.


At UN Women, we are giving our all. We are committed to building a more equal society where women can have access to opportunities and representation. A society that no longer limits women’s full potential. -- Natalie Nustas

This story was drafted with the kind support of Online Volunteer Nadera Bouazza.