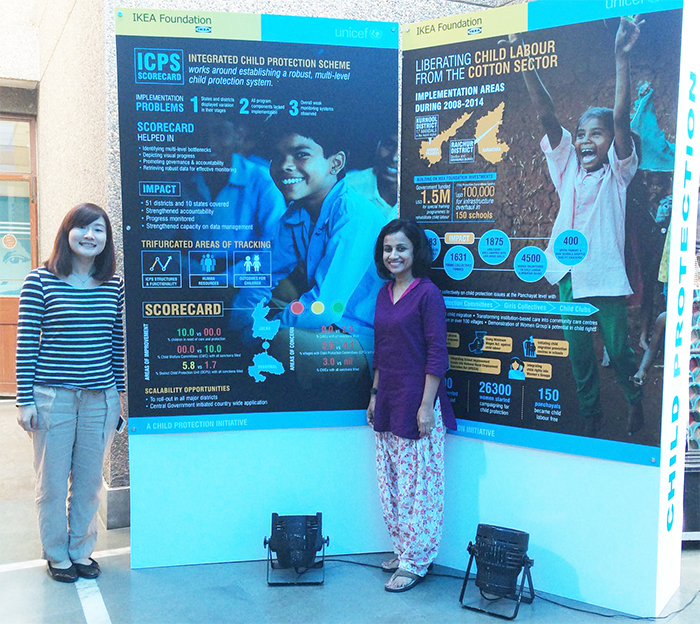 Miho Yoshikawa, an international UN Volunteer from Japan, was stationed in India with UNICEF. As a UNV Child Protection Officer in UNICEF's Delhi office, she was responsible for programme monitoring, assistance to the organization's state offices, documentation and research.

New Delhi, India: Miho Yoshikawa, an international UN Volunteer from Japan, was stationed in India with UNICEF. As a UNV Child Protection Officer in UNICEF’s Delhi office, she was responsible for programme monitoring, assistance to the organization’s state offices, documentation and research.

“My work as a UN Volunteer was to boost knowledge management capacities of the organization. I updated the child protection section of the UNICEF’s intranet in the country, maintained a database of child-protection programmes and supported child-protection officers at the state level through regular communication and information sharing.”

In recent years, India has made major investments in legislation, schemes and flagship programmes for child protection. Despite all these initiatives, the sheer scale and diversity of India, the low numbers of child protection personnel, limited role of civil society in programme implementation and absence of robust accountability mechanisms hinder progress on the ground.

Volunteerism enhances social cohesion and UN volunteers make significant contributions to communities. Miho talks about her volunteering in this context, “I helped UNICEF’s communication officers to select information on child protection for dissemination on local, national and international levels.”

UNICEF supports the government’s Integrated Child Protection Scheme and other child welfare programmes that create a protective environment for children through the improvement and expansion of services for children in need of care and protection.

In particular, UNICEF focuses on child labour, child marriage, child sexual exploitation and violence against children through mobilizing education, health, social protection and communication actors to contribute their resources, knowledge and expertise to prevent and protect children from violence, exploitation and abuse.

Miho takes pride in her contribution to child protection initiatives, “One area I documented was violence in schools. To encourage inter-gender dialogue on violence among adolescent girls and boys, I created an episode of Meena – a cartoon character popular in South Asia. It talked about child protection and violence against children.”

The cartoon character of Meena, a nine-year old girl who braves sensitive social topics against the stigma of HIV/AIDS and promotes girls’ right to education, became a successful advocacy and teaching tool for girls’ and children’s rights.

To advance Miho’s efforts, UNICEF developed the Meena Communication Initiative as a mass communication project that can change perceptions and behaviour that hamper the survival, protection and development of girls in South Asia.

“I worked with the Centre for Child and the Law at the National Law School of India University in Bangalore to organize a regional conference in Guwahati in Assam State to promote implementation of the Juvenile Justice Act in India’s Northeast States and Sikkim State.”

Miho continues, “During the conference that had 120 participants from policymaking sectors, I mobilized 30 student volunteers from the law school, briefed them on the initiative and guided them to support conference logistics and organization.”

The regional conference was a significant opportunity to share their practices and constraints, and to discuss ways to move forward.

As the first international UN Volunteer assigned to UNICEF India, Miho’s successful assignment contributed to the promotion of the value of volunteerism in the organization and among its partners.

“I have improved my personal and communication skills through working in a multicultural environment,” Miho says. “And I have a better understanding of approaches to child protection systems as well as UNICEF and government programmatic goals, visions, positions, policies and strategies.”

Miho Yoshikawa is one of 16 Japanese nationals deployed during 2014 and 2015 as a United Nations Volunteer under the Program for Human Resource Development for Peacebuilding (HRD), a joint partnership among the Ministry of Foreign Affairs of Japan, the Hiroshima Peacebuilders Center and UNV, funded by the Minister of Foreign Affairs.