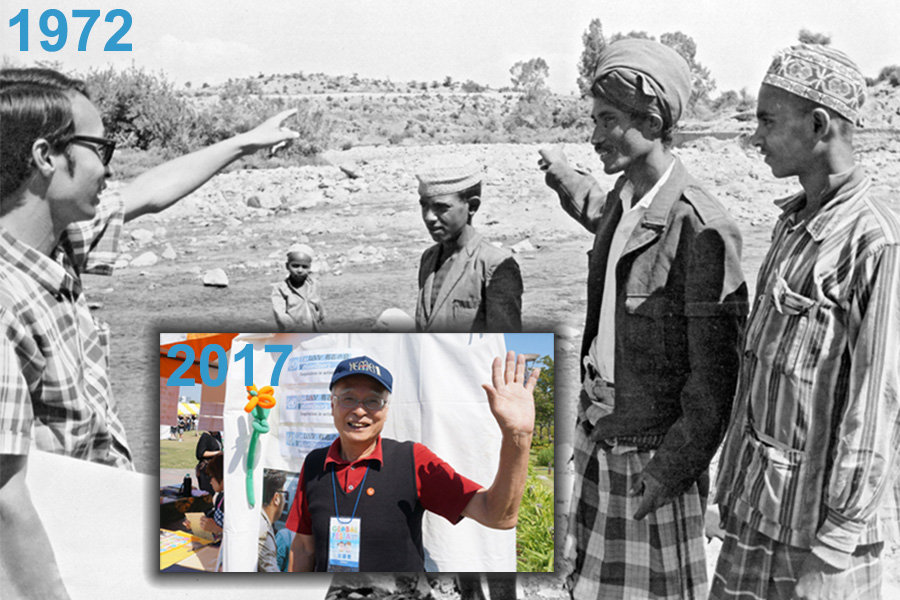 Mr. Yoshikazu Ito (Japan), one of the first UN Volunteers, then and now. In 1972: UN Volunteer irrigation technician Yoshikazu Ito explains to Yemeni farmers benefits they would derive if the irrigation project he is investigating at Wadi Warazan, Yemen Arab Republic, materializes. (UN Archive, 1972) In 2017: Attending an event on international cooperation in Tokyo, Japan. (UNV, 2017)

I was one of the first UN Volunteers

In 1970, the United Nations Development Programme (UNDP) sought engineers to serve as volunteers in North Yemen to build drinking wells in the aftermath of the civil war. At that very moment, the United Nations Volunteers (UNV) programme was not yet operational, but the wheels were already in motion. I applied, inspired by a book given to me one year earlier. By chance and circumstance, I had the incredible opportunity to serve as one of the first UN Volunteers.

I was working for the Irrigation Bureau of the Ministry of Agriculture and Forestry of Japan (currently the Ministry of Agriculture, Forestry and Fisheries) when I was invited to speak at a symposium hosted by the United States Consulate in Fukuoka. At the event, the Principal Officer gave me a book entitled The Good War: the U.N.'s World-Wide Fight Against Poverty, Disease and Ignorance. That chance encounter, in the summer of 1969, changed my life. It was the first step that led me to become one of the first UN Volunteers—an opportunity that opened the door for a long professional journey that spanned decades.


My first challenge was explaining to my employer my motivations in applying for this opportunity. Back then, the word ‘volunteer’ was not well understood in Japan. The idea that I could volunteer for the UN system, even less.

The UNDP office in Japan supported me throughout the process and after the announcement of my selection, in 1971, I was seconded to the project and temporarily relieved of my duties at the Ministry. I was honoured to have been selected to serve as a UN Volunteer.

I first flew to the U.S. to receive Arabic language training and be briefed. There were seven of us arriving from Austria, Finland, Italy, Japan, Norway, and Sweden. By the end of the year, we were joined by more UN Volunteers from Egypt, Iran, and the Philippines. Two of us were engineers in irrigation, drainage and reclamation engineering; the others were specialised in agriculture and cultivation techniques. Our role in UNDP was to contribute to the reconstruction of the country by supporting agricultural productivity.

North Yemen was emerging from civil war at that time. There was a lot of uncertainty yet a strong need for reconstruction. The country is also home to one of the world’s oldest dams, the Ma’rib Dam, dating back 2,700 years. This engineering structure is akin to sacred ground for professionals in the fields of irrigation and drainage. It is easy to understand how working on this project for the UN was an honour that motivated me deeply on many levels.

My UN Volunteer assignment required that I develop water sources for drinking and irrigation within desert areas. The development of water resources, especially drinking water, was a crucial issue for the development of the region. I assessed infiltration water using electrical prospecting, collected data, and dug wells. During the engineering process, I also trained Government personnel in these techniques. We successfully delivered results across many project sites.

As soon as one well was successfully developed, we received many more requests, mainly from Sheikhs—the leaders of tribes and villages. We needed to decline requests if there were geographical difficulties, yet we all agreed that we needed to implement as many projects as possible. The stakes were simply too high to refuse the added work. From this experience, I learned to listen carefully to the needs of the local population. After my return to Japan, my Government reassigned me to North Yemen once again, this time through the Overseas Economic Cooperation Fund (OECF, currently the Japan Bank for International Cooperation). Little did I know then, that my work had only begun.


Looking back to those years, I realise that since serving as a UN Volunteer with UNDP, I have not only met countless dedicated people, including other UN Volunteers who remain forever engraved in my memory, but I have worked with them on four continents to build life-supporting infrastructure and improving lives. That, is the good war.

I mentioned that by chance, a door opened in 1969. It allowed me to travel across Africa, Asia, the Pacific, Europe and Latin America, working on development projects first with UNDP but then through organizations such as the OECF, the Food and Agriculture Organization of the United Nations (FAO), the Ministry of Foreign Affairs of Japan, and the Japan International Cooperation Agency (JICA). That first UN Volunteer experience in North Yemen proved invaluable in other conflict areas such as Afghanistan, Angola, Bosnia, and Eretria. I carried it with me every step of the way.